When the bells toll: McGaffin Carillon rings over University Circle 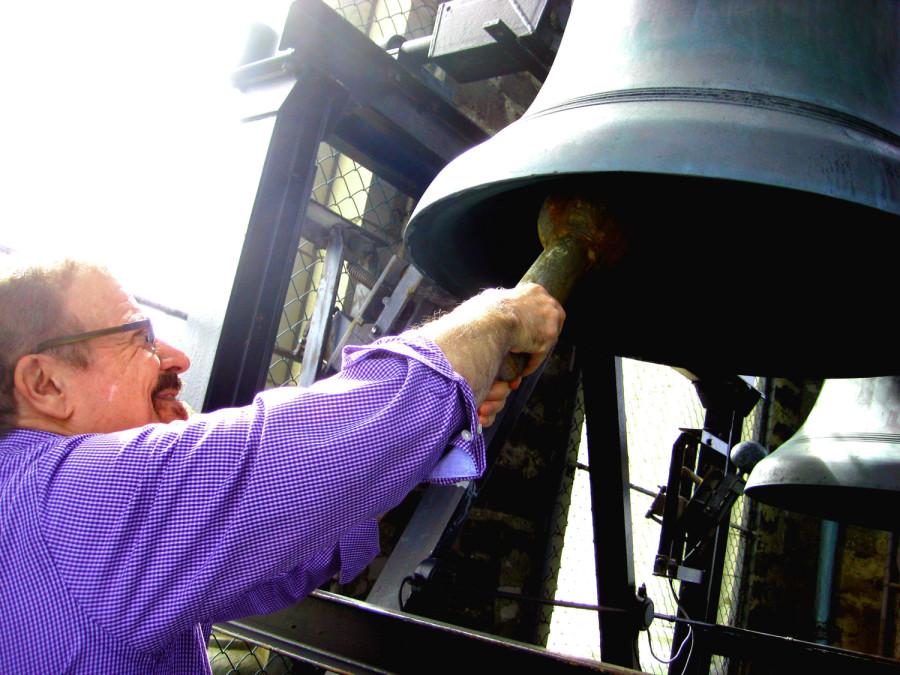 Underneath 47 massive bells, weighing more than 15,000 pounds in total, George Leggiero is right at home.

Inside the Church of the Covenant, Leggiero began the trek up a tightly wound spiral staircase, the same trek he has been making for the past 42 years since he was a student at Case Western Reserve University.

Atop the stairs, about 80 feet above the bustling Euclid Avenue, an instrument sits on a raised platform. It looks something like a hollow piano with two rows of wooden handles instead of white and black keys. Two rows of foot pedals protrude from its base. Wires stretch up from the back of the instrument and disappear, through the ceiling, to the bells above.

This is a carillon, an instrument with history stretching back the 1600s—roughly 200 years before the piano was invented. At the Church of the Covenant, the McGaffin Carillon has been ringing since 1968.

As Leggiero tapped the handles of the instrument with closed fists, the church’s bells began to peal, one by one, as he adjusted the length of their wires, like a violinist warming up before a performance. Once he was satisfied with the sounds, he prepared his sheet music for the half-hour lunchtime concert.

Leggiero works part-time as the University Circle carillonneur and full-time as the senior application support analyst for Kent State University’s libraries. As he began to tap the worn handles to play a song by Bach, his FitBit registered a step for each note.

When the concert began, some construction workers sat on the steps of the building they were renovating, and the ringing of the bells replaced the usual drone of their machinery. Some students walked by, listening to the notes playing out across Mather Quad as they made their way from one campus building to another.

Fourth-year student Ettore Fantin did not look up or stop walking as he passed behind the church, but he listened to the melody.

“I saw a 70- or 80-year-old couple sitting on lawn chairs they brought and watched the bells play,” said Fantin. “I was thinking about how cute they were and that newer generations don’t appreciate things like they do.”

Nancy Smekal, a member of the church’s congregation and a French teacher at Cleveland’s Montessori High School, brought her class to hear the concert and teach them about the European tradition of carillons.

“I belonged to this church when I was really young, and then I had to move away, and all of the years that I was away I would stream [the church’s Christmas service] online on the radio to hear it, because that to me was Christmas Eve,” said Smekal. “You would hear the bells of the carillon from the church. It’s for joyous things, and also to remember events.”

After the concert, Leggiero hosted Smekal’s class in a room near the entrance to the carillon and shared its history.

“They used [carillon bells] as a source of bronze … What other things are made out of bronze?” Leggiero looked around the semicircle of students seated before him. “Canons. So you come into a town, you knock the bells out of the town steeple, and you make canons and use them. And when the war’s all over and you’ve lost, they take and melt down the canons and make bells again.”

Once made, a carillon bell will never again have to be tuned. However factors like acid rain and time can still push the bells into ill repair, something the McGaffin Carillon has been falling prey to over the decades.

Denise Horstman, a ruling elder at Church of the Covenant, was asked to chair a committee to look into what repairs or improvements the carillon needed. That investigation resulted in the formation of the Friends of the McGaffin Carillon, a nonprofit aiming to ensure that the carillon can continue to shape the soundscape of University Circle.

This is personal for Horstman; while she was studying library sciences and history at CWRU in the 1980s, the carillon called her to church each Sunday.

“From my apartment on 115th … George would play the carillon at about quarter ‘til, and the sound would go right there,” said Horstman. “I could roll off my studio couch, throw on some clothes and get to church.”

Friends of the McGaffin Carillon, of which Horstman is currently president, is raising money for the instrument. They hope to add an electronic system to ring the bells quarter-hourly and play some pre-programmed songs, add two more bells and clean the existing ones, all by the bells’ 50th anniversary in 2018.

That anniversary will mark Leggiero’s 46th year as the carillonneur—nearly one year of playing for each of the 47 bells. He is already looking forward, hoping to form a student guild of apprentice carillonneurs and that the improved carillon will draw a professional carillonneur when the time comes for a replacement.

“I need to see this renovation through, see this project get going,” said Leggiero.