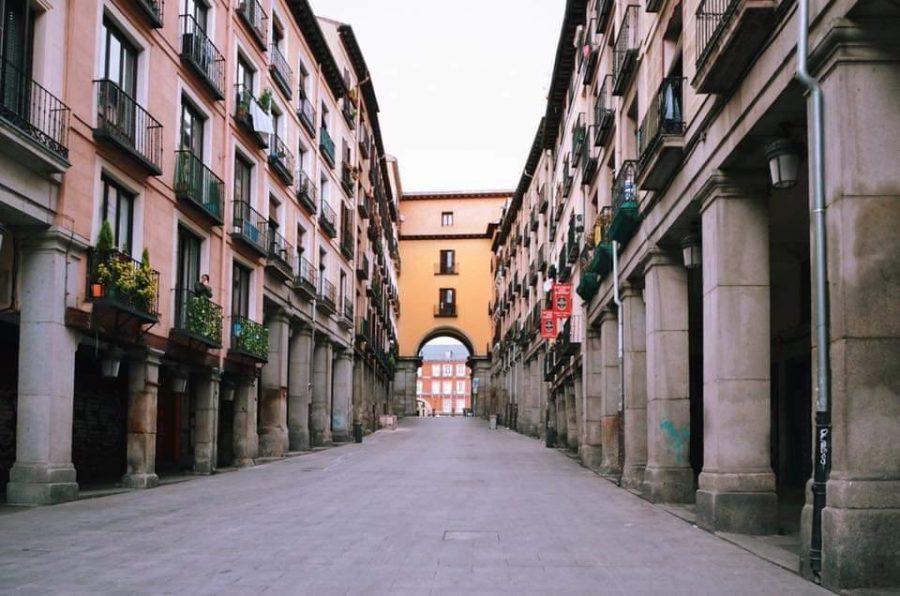 The desolate Plaza Mayor was once bustling with life.

At the beginning of 2020, I saw so many memes about a plague happening this year to mirror the various pandemics that occurred in the 20’s of past centuries. I laughed at them and continued scrolling. When COVID-19 first appeared in China, I brushed it off and left for my study abroad program in Madrid at the end of January while the virus was still largely ignored by the wider community. I was not worried in the slightest about the disease. In fact, I didn’t even think about it.

As January turned into February, however, I became more cautious. The death toll had been steadily rising in China, cases had spread outside of the country and stories of quarantined cruises and airplanes had started to circulate. The Spanish government had not expressed any worries surrounding COVID-19, and neither had our school, so I continued to largely ignore the issue, perhaps being a bit more cautious about washing my hands and touching my face. I still took the subway and went to clubs and bars, and so did everyone else I knew.

After Italy became a hotspot for COVID-19, and especially after Venice and Naples were put under lockdown, COVID-19 became a much more serious discussion among the students I was studying with in Madrid. By the time March rolled around, it was all anyone was talking about—except for the Spanish government, of course. In fact, while people were talking about the COVID-19 problem, no one seemed to be doing much of anything about it. Classes were still full and I saw people going out to bars and clubs every night. It seemed as though nothing had changed, even with Venice and Naples on lockdown right next door.

Every day I went into class, someone would mention the new number of cases in Madrid—a number that seemed to grow exponentially every day. People around me became more paranoid, and so did I. I canceled a trip to see my friend in Copenhagen because I was concerned about either catching or transmitting the disease, and many of my friends had their flights within Europe canceled due to efforts to contain the disease. To make up for all the cancelled flights, people went out and partied all the more.

At that time, I was determined to stay in Spain for as long as possible, as were most of my exchange student friends. That was on Monday, March 9. The situation rapidly deteriorated from there. Late that Monday night, the Madrid government put out a notice that all schools were to be canceled for the next 15 days as the number of COVID-19 cases in Spain rose by 83% that day alone. By that time, I was highly paranoid.

It wasn’t until March 10 that people started staying home. The trains emptied, and the few remaining passengers were dressed in masks or scarves. On Wednesday, I went to say goodbye to one of my friends who was headed home. On my way, I passed through Plaza Mayor—as one of the biggest tourist hotspots in Spain, it was always flooded with people— but instead of having to force my way through the usual large crowds, I walked through an eerily silent square.

I was at my friend’s house for Wednesday and Thursday, awake all night as, in rapid succession, President Trump put out a travel ban, Case Western Reserve University sent out a request for all study abroad students to return home and rumors started circulating about Madrid going on a lockdown. To be completely honest, it was mostly the possibility of being stuck inside for three months that made me consider leaving Spain.

I went home and immediately started packing, trying to get out of Spain by Friday, as a friend had told me that people arriving in the U.S. after Friday might be put into quarantine in a military base. I called Delta Airlines to try and change my ticket from the end of May to as soon as possible. After spending over six hours on hold, I elected to go to the airport in person first thing Friday morning. I quickly learned that had I wanted to buy a new ticket, the cheapest options would have been over $2,000.

I went over to my friends to say goodbye late in the evening on Thursday. Once again, I was awake all night talking and packing. Both of my flatmates, study abroad students from CWRU, also had found flights and were leaving as soon as possible.

One of my flatmates had a 7 a.m. flight out of Madrid to Toronto, where her mother was picking her up because there were not any available flights she could find to the United States. I accompanied her to the airport at 4 a.m.; once there, dragging my 80 pounds of luggage behind me, I ended up at the Delta help desk. I was able to get on a 9 a.m. flight headed to Atlanta. While standing in line to check my baggage, I met many U.S. exchange students also in a mad rush to return home. On the airplane, a majority of the passengers were students. In fact, I actually sat next to three students who had gone to the same Spanish university I had.

I wore a mask the entire flight, and as soon as I got home I was bundled into my sister’s room where I sat in self-quarantine. Ironically enough, I saw memes on Instagram and Reddit about the amount of toilet paper people are buying and how the world is going to end. I still laughed, but now because they’re scarily accurate rather than actually funny.