McGinnis: How capitalism has failed us

The ugly truth about the income gap 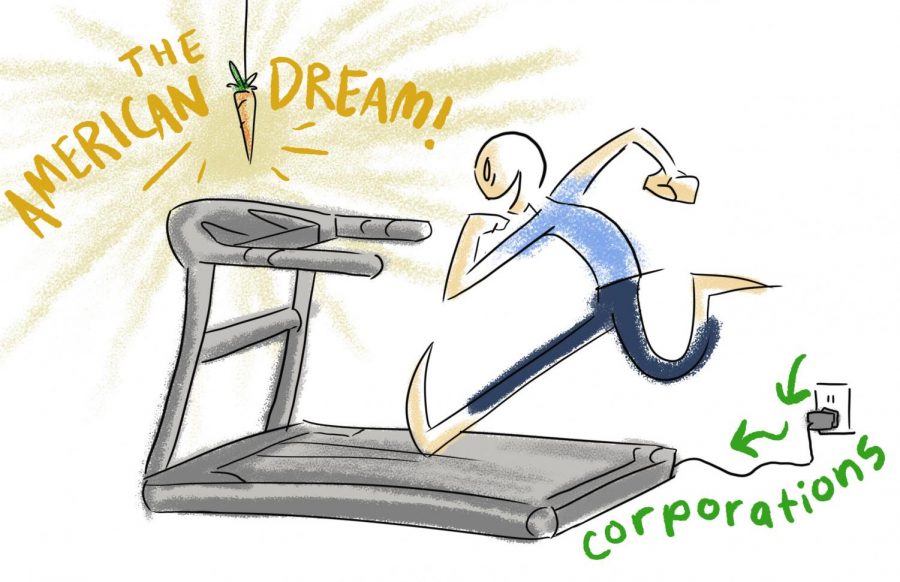 While the U.S. has the highest gross domestic product of any nation, in 2017, 78 percent of Americans were living paycheck to paycheck. Six in 10 Americans did not have enough capital to survive without a job for three months. Of course, not every American lives that way. A small portion of Americans qualify as the uber-rich, or the one percent. The richest three people of this one percent own more wealth than the bottom 50 percent combined. And this gap has steadily increased since the massive tax cuts imposed by the Reagan administration in the 1980s.

The income gap perpetuates inequality in the U.S., affording some the opportunity to fundamental rights such as health care and education while forcing others to work several jobs to merely scrape by. Placing a higher wealth and income tax on the top one percent could be one step towards leveling the playing field.

Understanding the players in the system furthering inequality is necessary to understand how we can rectify the problem. The top one percent is generally made up of two types of people: old-money billionaires and supermanagers. Old-money billionaires are people whose families have accumulated capital for generations, receiving income without actually producing any wealth by renting out real estate or stocks and bonds. The term supermanagers refers to CEOs and CFOs of large companies who earn billions of dollars without producing any wealth.

The inherent problem with supermanagers is that there is no way to accurately quantify how much they are worth to their companies. Additionally, as they often set their own salary, supermanagers tend to estimate their worth generously. CEOs of most major companies make, on average, 300 times the salary of their average employee. This is a 2,000 percent increase from 50 years ago. What makes Tim Cook worth 283 Apple employees?

The massive concentration of wealth held by supermanagers and old-money billionaires ensures two things: that the rich get richer and that the poor get poorer. Tax breaks and our market-based system, which emphasizes capital over people, will continue to perpetuate this cycle of poverty until the one percent holds even more of the wealth while the rest of the country struggles to survive.

Financial security, or lack thereof, intimately affects all areas of life. Those with money have the capital to invest, not only in things of direct monetary value that can provide immediate returns such as real estate or stocks but also in their children’s education. Impoverished and low-income children have significantly lower literacy rates, more limited vocabularies and higher high school dropout rates, coupled with a greater incidence of severe mental illnesses. All of these factors combine to make it more difficult for people to improve the circumstances they were born into and better their children’s future.

A capitalist, market-based system inherently sustains the income gap.The ideas that people will always be able to produce better products, innovate and receive recognition and that merit will always win out are severely flawed. The phrase “pull yourself up by your bootstraps” perfectly encapsulates this flawed logic of capitalism. It is not possible to simply work and reach the same level as other people due to the roadblocks created by the system, not to mention the different starting points and opportunities given to different people. Even Silicon Valley start-ups have had a hard time earning enough income and wealth to challenge those old-money billionaires.

Prejudice also plays a role in perpetuating the cycle. Minority groups, including women, people with disabilities and the LGBTQ community, feel the effects of the income gap more strongly. Members of these groups are simply not given the same opportunities, despite our strongly held belief that anyone can achieve the American Dream if they work hard enough. However, working three jobs is apparently not enough to even earn fundamental rights such as health care in this country . Really, it’s only the land of opportunity for the wealthy, white, straight, cis males.

The reality of a capitalist system coupled with prejudice and dramatically different starting points for each individual are just a few of the causes of the wealth and income gaps in the U.S. The Gini Index is used to measure income disparities. A zero in the index indicates perfect equality, and one indicates perfect inequality. It is important to note that the Gini index usually only refers to income inequality and not wealth inequality, as the latter is much more difficult to measure. In 2018, the U.S. had a Gini index of .49. After reporting the lowest index of 0.35 in 1965, the U.S. Gini index has been steadily rising over the past four decades, spiking up after the Reagan tax cuts.

We’ve seen this sort of massive income and wealth gap before, just prior to the Great Depression. When there is no capital circulating for the lower and middle classes to spend, the upper class cannot make any money, and the entire economy stagnates. To prevent this, we need to reinstate a high income and estate tax on the one percent, decreasing the amount of wealth that stagnates in the hands of a few individuals. Now, I’m not saying that we need to return to FDR’s 90 percent income tax and 70 percent estate tax instituted under the New Deal. That’s extreme, and thankfully, our economy has not yet stagnated to the point where that is necessary.

Instead, an increase of eight or nine percent on the top tax bracket would help to not only reduce our national debt but also relieve the strain on our economy placed there by the income and wealth inequality. The money gained from these taxes could be used to further stimulate the economy by providing government jobs improving national infrastructure such as fixing the highway systems, providing green alternatives for transportation and increasing the amount of clean energy available. The money could also be used to better our nation in the long term by improving school systems and providing universal health care. To put a long story short: capitalism has failed America. In order to put our economy on the right track, a more progressive income tax is necessary.