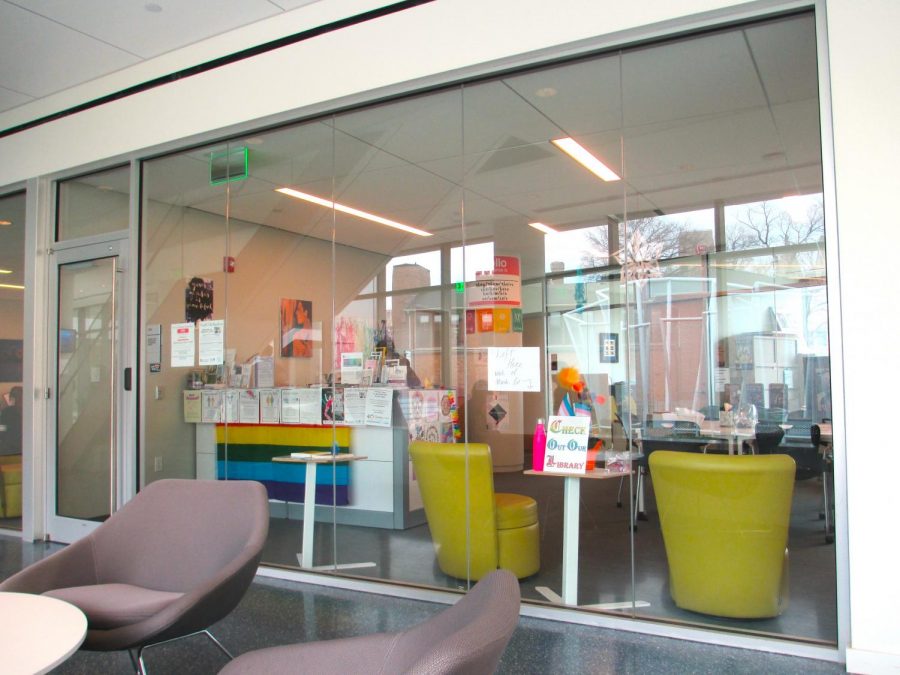 Case Western Reserve University's LGBT Center in the Tinkham Veale University Center. Members of the LGBT community have a number of concerns regarding the gender-inclusive bathrooms and spaces around campus.

As far as college campuses go, Case Western Reserve University seems to be one of the more LGBT-friendly campuses in the country. However, there is always room to grow and improve, and CWRU would do well to improve restroom inclusivity across campus.

I wondered if other people within the LGBT community felt this way as well, so I sat down with several people at the LGBT Center to talk about the issue. They were all excited to share their opinions, but wished to stay anonymous. Although I spoke to several people within the LGBT community, this article by no means reflects the views of the entire diverse community. Here’s what they had to say.

Overall, accessibility is the main issue that people seem to have with restrooms on campus. Although we have gender-neutral restrooms, they’re often hard to locate. There’s an app that has a list of restrooms on campus and what category they fall into—gender neutral, gendered single stall or gendered—but it isn’t up to date and is difficult to use. For instance, there’s supposedly a gender neutral restroom in the basement of Guilford, but nobody’s had any luck in finding it.

Even in buildings that do have gender neutral restrooms, they’re often out of the way or inconveniently placed. Rockefeller Building has a gender neutral restroom on the fourth floor, at the top of its nightmarish stairs. Glennan Building faces the same dilemma. Imagine having to hike all the way up those stairs to be able to use restrooms you feel comfortable and safe in.

According to the CWRU restroom map, only five buildings on the Case Quadrangle have gender neutral restrooms. I’ve never seen a sign for any of them.

This doesn’t even account for the fact that there are more than five buildings without gender neutral restrooms on the Case Quadrangle. Luckily, most of the buildings on the quad are connected to other buildings. Even so, it’s extremely inconvenient to have to run to another building between classes just to go to the restroom.

This issue with accessibility goes beyond the quad, reaching other parts of campus as well. In buildings with study spaces, such as Wade, Leutner and Fribley Commons, there aren’t any gender neutral restrooms. Instead of being able to take a quick break from studying to go to the restroom, some people are forced to go back to their dorms to use the restroom. Even though some people do feel safe using the gendered restrooms which offer privacy in the form of stalls, not everyone feels this way.

The problem extends to the locker rooms in Veale Convocation, Recreation and Athletic Center as well. There are only two gender neutral locker rooms in Veale, and they’re single person locker rooms. There are also no photos online of the gendered locker rooms, so even those who might want to use them can feel like they are facing something daunting by entering them. They won’t know what the layout is or if they will have a safe space to change or shower. If the university just uploaded photos of the locker rooms, that would help tremendously in this particular problem area.

The university would do well in continuing to install gender neutral restrooms in all buildings on campus. Students are especially hoping that the new health campus will have plenty of gender neutral restrooms, perhaps even with multiple stalls. Everyone prefers using a single stall restroom, but they’re just not effective or efficient on a busy college campus.

Another oft-cited issue by the students at the LGBT Center was menstrual products. This is actually an issue I brought up, because I recently noticed that pretty much every restroom I’ve been in on campus has a sign about “feminine products.” That’s a problem. These signs completely neglect that not everyone who gets their period is a woman. Non-binary people and transgender men can get them too. The signs should be changed to say “menstrual” or “sanitary” products instead. Or, the signs could just say “please only put toilet paper in the toilet” to be more discreet.

One of the people I talked to was forced to carry a used menstrual product with them out of the men’s restroom once because there also weren’t trash cans by the sinks. This a ridiculous oversight, and there should be trash cans in every restroom, even if there aren’t smaller ones for sanitary products.

What’s worse is that, often, those hard-to-find gender neutral restrooms that are supposed to have the free menstrual products aren’t even stocked. It just makes those spaces feel even more forgotten about.

The upshot of respect

Since we will probably be stuck with a limited number of gender neutral restrooms for awhile until more can be built and renovated, there are things that cisgender people can do in the meantime to be better allies.

If you feel comfortable using gendered restrooms, then please use them whenever possible. For some, the gender neutral restrooms are the only ones they can use, so be mindful of that.

If you live on a floor with Gender Inclusive Housing (GIH), do not use the GIH restrooms. I’ve heard instances of cisgendered people on a GIH floor using the GIH restrooms to shower, both taking away the GIH students’ safe space and causing them to be late to class.

At the end of the day, just be respectful. Keep in mind that people need to use gender neutral restrooms to feel safe. Not everyone has the luxury of feeling comfortable using a gendered restroom.

We have to do better.