Medical students band together for ShowCASE of campus musical talent 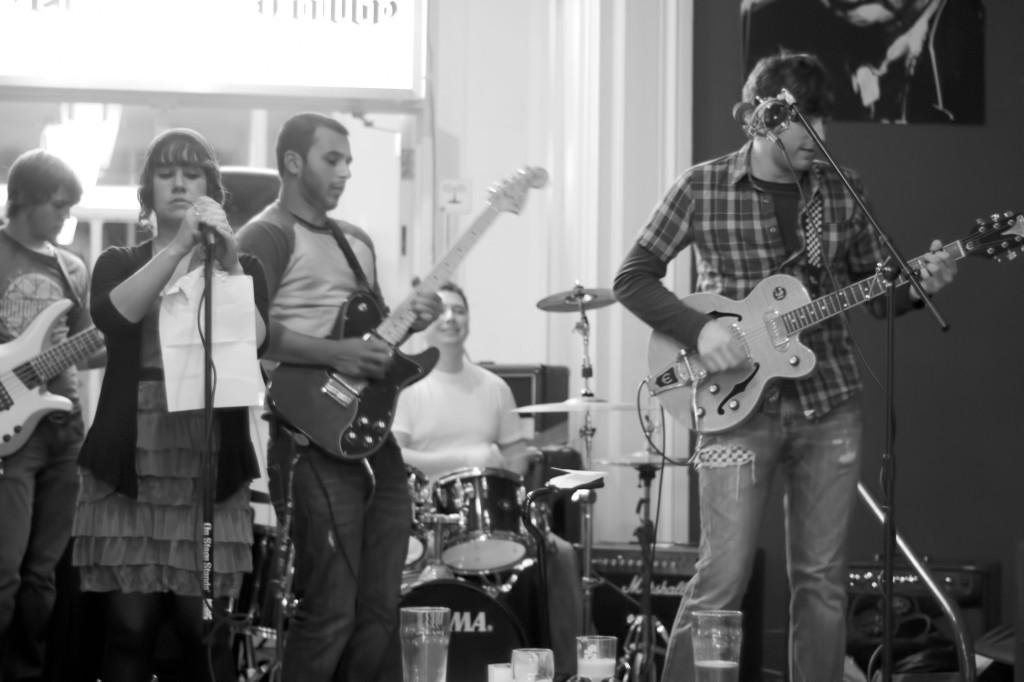 Among music’s many transformative qualities it is pronounced capability to call people to action in order to help others. ShowCASE is attempting to do just that with the events they host, the most recent being the show that they co-hosted with the American Medical Student Association’s Sex and Gender Group at the Jolly Scholar on Friday, Nov. 5.

ShowCASE, created by Boris Block and Rick Arlow, was founded just over a year ago. The two had been playing together for a short time and came to the realization that there were many musicians like them that loved performing for audiences but were unable to find the time and resources to put on a show.

“Rick came up with the idea to put on an open-mic [show] and I jumped at the opportunity to play for other people,” said Block. However, it didn’t just stop there. “[We] are both interested in community service and charity work so we began to bring in charities to try and raise some money for them.”

“I handle most of the performer interaction, charity identification and hosting. Boris makes everything happen,” said Arlow. “I get charities in by word of mouth. At first it was hard to find charities that were interested in coming as we didn’t have a track record.”

After a couple of successful shows, though, this has changed as the charities are now coming to them. Arielle Kanters, head of the fundraising for this event with AMSA’s Sex and Gender Group, commented that, “I contacted ShowCASE and asked if they would be willing to co-sponsor a fundraiser with the AMSA sex and gender group.”

With the Sex and Gender group, Kanters said, “We try to raise awareness about LGBT and women’s health concerns, and familiarize our classmates with the fact that it’s not sexual orientation or gender identity that puts individuals at increased risk of different medical conditions, but social habits. We are trying to debunk the myths of LGBT heath care.”

Starting shortly after 7:30, the first band to play was The House Band. Covering popular songs such as Train’s “Soul Sister,” they also had their own songs that they chose to perform. Many of the members from all the bands were graduate and medical students, but anyone was invited to play during the open-mic sessions in between the bands.

There were a variety of performers in the open-mic sessions: there was an intriguing version of Fountains of Wayne’s “Stacy’s Mom” and OK Go’s “Here It Goes Again.” It wasn’t just limited to singers and guitarists either – Matthew Abelson completely captured the crowd by performing on a hammered dulcimer. Now a first year medical student, he took a few years off of schooling to be a full-time musician.

Returning to the music field after not playing for a brief time, Edgewater Lights, a band that featured Block as its drummer and performed at the Spot Wednesday evening, got the crowd with their original sound. Mitch Kline, a member of the House Band, commented, “Most of the songs that [Block] plays are his own.”

Evil Elite, which shortly after followed Edgewater, was noted for its amazing sound with the aid of the piano. Overall, all three bands were fantastic, and the open-mic acts were well worth the time.

“I enjoy the whole thing,” said Kline, “but the jam at the end is always a highlight. At the end of the night, once all the bands/performers have finished, anyone who’s interested can get on stage and let loose. We have a good time with that.” Block added, “The best part is that no matter what people play, they always have a good time on stage and in the audience.” The performers agree that their least favorite part is packing up and leaving at the end of the night.

All the proceeds from this event, an estimate of $500 dollars coming from a deal with the appetizers and the drink specials, are going to the Metro Pride Clinic. Kanters remarks that, “Given the success of the event, we definitely hope to work with ShowCASE again in the future.”

“Our goal is to provide performers a low-stress environment to show off their skills, to provide additional financial support to charities, and to provide great entertainment and drink specials to students who typically lack the funds to go to traditional concerts and festivals,” said Block. Block and Arlow both encourage charities interested in co-sponsoring a fundraiser to contact them at bxb275@case.edu.

Arlow added, “We’ve been talking about planning a large outside event when the weather gets warm again and also some creative charity events that have a stronger impact.”

“I’m always thrilled to take part in ShowCASE” commented Kline. “Have drinks with friends, play for an audience, support a charity – it doesn’t get better than that!”