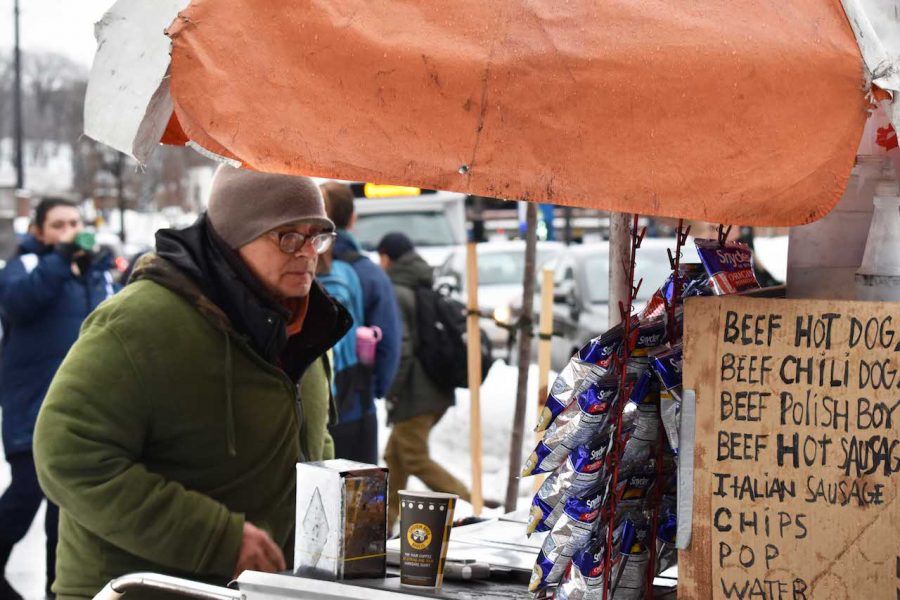 John Budd sells hot dog in front of the Rainbow Babies and Children's Hospital. Although spending most of his time in the University Circle, he sometimes feels disconnected from the community.

Five days a week, all year round, John Budd stands in front of Rainbow Babies and Children’s Hospital and sells hot dogs to people from all walks of life. On one of Cleveland’s dreadful winter days, The Observer spoke with him at his regular spot outside of the hospital.

Budd goes to work in the winter at 10 a.m. and earlier during the summer. That’s a lot of dedication for a small stand, but for Budd, selling hot dogs is not about passion.  Budd’s hot dog stand has received customers ranging from Case Western Reserve University students to children visiting the hospital to tourists of University Circle.

“The kids are happy to get a hotdog,” Budd said. “They’ve had a crappy day. They had to go to the doctor’s, so it’s the highlight of their day.”

In the cold winds, Budd took a minute to light up a cigarette and commented on his life. He said, “Usually I’m the last to know [about things going on around campus].”

He doesn’t have the opportunity to get to form relationships with many of his customers. Budd said he would stay under the rooftop of the front entrance to the hospital on cold days, and run out to the hot dog stand when he sees people standing there.

But life hosting the hot dog stand isn’t always as dull as Budd made it sound at first. A woman in a car pulled over during Budd’s interview with The Observer.

Budd gladly explained that she’s a regular customer who comes and buys hot dogs once or twice a month. He smiled when he said he gets quite a few of those and would remember them by the kinds of hot dog they always order.
“After a while, it’s like I know them,” Budd said happily.