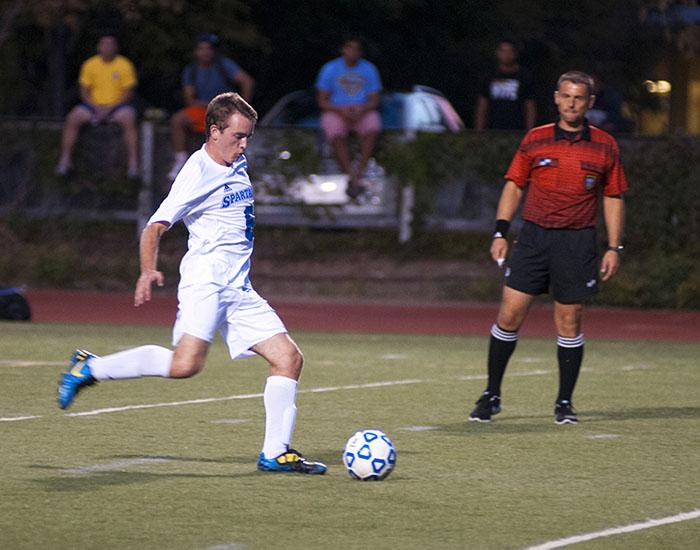 Last Saturday, the Case Western Reserve University men’s soccer team faced the Judges of Brandeis University, a tough opponent considering their nationally-ranked status and league-leading position. No. 9 Brandeis has yet to be defeated this season. Despite losing the game, Case managed to hold the Judges to only two goals, which were both scored in the second half.

At the end of the first half, the game remained scoreless thanks to Case senior goalkeeper Ryan Koepka. Koepka made two key saves to prevent the Judges from getting an edge over the Spartans. The Judges helped Case by only shooting on target 25 percent of the time in that half.

The second half, however, was a different story. Brandeis stepped up the intensity by shooting 33 percent on goal. Two of the Judges’ six shots found the net. Koepka made two great saves yet again to try to keep the Spartans in the game, but the team could not produce enough offense to answer the Brandeis goals with some of its own. This brought Koepka’s saves total for the game to four.

Case managed to step on the gas pedal offensively by shooting four more shots in the second half than in the previous half, but it was just not enough. Case’s on target shooting percentage remained stagnant throughout the game at 25 percent per half.

For the entire game, Brandeis took 14 shots, with six on target. Case took 12 shots, but only two were on target; they came from seniors Rene Silva and Aaron Mayer. Brandeis’s 43 percent rate for shots on target tremendously outweighed Case’s 17 percent. Additionally, Brandeis controlled the corner kicks, taking three more than the Spartans.

Putting this game behind them, the Spartans will travel to Atlanta, Ga. this Friday to face Emory University (6-5-1, 1-1-0). With three fewer wins and three more losses than the Eagles, the Spartans have been dubbed the underdogs. However, they are well aware that this game is not out of reach by any means. The Spartans will battle it out beginning promptly at 7:30 p.m. Case will then travel to Carnegie Mellon University (8-1-1, 1-0-1) on Sunday to play the Tartans at 1 p.m.

The next home game will take place on Friday, Oct. 26 at 7:30 p.m. The Spartans will face the Maroons of the University of Chicago (6-2-3, 0-1-1). This looks to be a tight matchup, as the two teams are adjacent to each other in the league standings.

Prior to the game, the team will take time to recognize its nine seniors for Seniors Day.