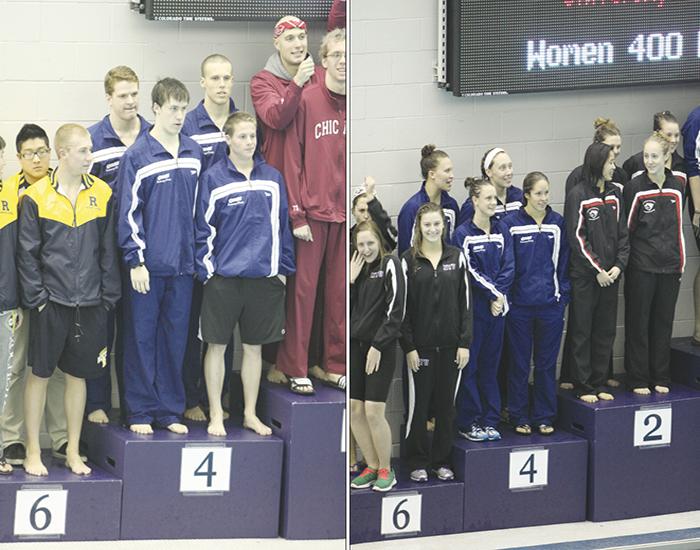 The final heat of the men’s 400-yard free relay, comprised of freshmen Eric Haufler and Caleb Allen and sophomores Heath Hudgins and Gus Bailey, touched the wall in fourth place, and the crowd in the Veale Natatorium erupted in applause as the men sealed a third place finish in the University Athletic Association, matching the best in program history. The men finished with 1153.5 points in third place, a one-spot improvement over last year, earning second-year head coach Doug Milliken and his assistant Emily Wylam and diving coach Camille Johnson their second UAA Men’s Coaching Staff of the Year award.

“It was a truly great honor,” said Milliken. “To me, it’s a testament to our staff and to the team that we are able to get behind common goals and do the work necessary to achieve those goals.”

The women’s team wasn’t able to match the success of their counterparts as they finished seventh, but they still posted a number of All-UAA and record-breaking performances. The women’s team finished with 782 points, 103 behind sixth place University of Rochester.

Emory continued its dominance in the UAA, sweeping the men’s and women’s titles for the 14th straight season. The College Swimming and Coaches Association No. 3 men finished with 1897 points, while the No. 1 women won with 2112 points. The University of Chicago finished second on both sides as the No. 12 men finished with 1197 points and the No. 9 women finished with 1288.

The two teams had a number of top-eight finishes and NCAA B-Cuts over the four-day meet. Bailey, the top preliminary qualifier in the 50- and 100-yard freestyles, finished second in the 50 free in 20.97 seconds and third in the 100 free in a school record 46.35 seconds.

Sophomore Nick Clyde earned a B-Cut in the 200-yard breaststroke with a third place finish in a time of 2:5.31. Clyde set the school record in the 200-yard individual medley in the day two prelims with a time of 1:53.88, but fell off in the finals to finish seventh in 1:56.84.

Sophomore Sean Nickley finished fourth in the 100-yard breaststroke in 58.03 seconds and touched out Clyde in the 200-yard individual medley to finish sixth in 1:56.27.

Case’s 200-yard freestyle relay and 200-yard medley relays were both top-three finishers, earning All-UAA honors. Bollinger, Nickley, Bailey, and Allen were part of the third-place 200-yard medley relay that finished in 1:34.67. Bailey, Clyde, and freshmen Elliott Kerbel and Eric Haufler, were part of the third-place 200-yard freestyle relay that finished in 1:24.51.

On the women’s side, senior Stephanie Campbell had the meet of a lifetime, resetting three of her individual school records and NCAA B-Cuts in those three events. Campbell finished fourth in the 200-yard backstroke in 2 minutes 3.61 seconds, four seconds faster than her previous record. Campbell also set school records and grabbed B-Cuts with her fourth place finishes in the 200-yard individual medley in 2:08.55 and the 100-yard backstroke in 58.04.

Campbell also set a school record as part of the 200-yard medley relay with the help of freshman Brianna Cain and sophomores Maggie Dillione and Sara Tillie. The relay finished second in a record-breaking time of 1 minute 47.45 seconds. The relay of Campbell, Tillie, Dillione, and senior Jessica Nuhfer finished third in the 400-yard medley relay in 3:54.28 seconds.

The next step for the Spartans will be the Midwest Invitational in Chicago on Feb. 24-25, where swimmers from across the region will compete for NCAA A- and B-Cuts for invitations to the National Championship in Indianapolis on March 21-24. Case is sending 12 athletes to the event.

“We are striving to improve a few swims with the hopes of being invited to the [National Championship], but it will be a challenge,” said Milliken. “We are hoping for the best and are staying cautiously optimistic about our chances.”