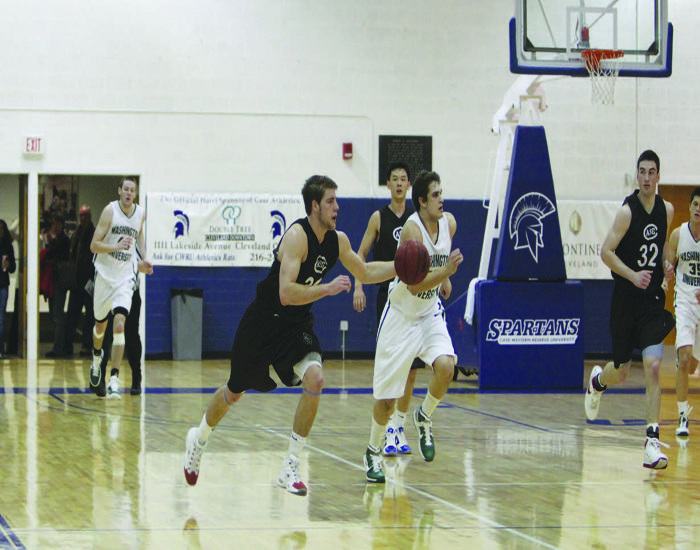 Last week, the Case Western Reserve University men’s basketball team lost a nail-biter at Brandeis University. After 40 brutal minutes, the Spartans (8-10, 0-7) went into overtime but came up short in the end by only four points. Tonight, the Spartans seek a different outcome when they face the Judges (11-7, 5-2) in a rematch, this time on their home court.

In their previous battle, the Spartans were led by senior Tom Summers, who recorded an impressive double-double with 20 points and 10 rebounds. He currently stands as the 14th highest scorer and 4th rebounder in the UAA. His ability to get to the rim will be a key factor in tonight’s matchup.

Junior Austin Fowler also recorded a double-double in last week’s battle, with 17 points and 14 rebounds. He leads the Spartans with an average of 15.4 ppg. He also holds all-conference rankings for being the seventh highest scorer and the leading rebounder in the UAA. His presence on the floor will present a serious threat to the Judges in tonight’s rematch.

The only other player to score in double digits last Friday was 6’9’’ sophomore David Thompson, who tallied 13 points and 6 rebounds. Not only does Thompson hold all-conference rankings as the 17th top scorer and the 5th top rebounder in the UAA, he has also recorded the 5th highest number of blocked shots. These strengths will be tough to defend as the Spartans come hungry for a win in tonight’s game.

Several freshmen have had strong performances on the court this year, including starter Julien Person. In last Friday’s game, he shot 75percent from the floor and accumulated seven points for the Spartans. The energy that he brings will be a key asset to the Spartans tonight.

Jordan Dean, another freshman, has also played a key role this year, starting at point guard for the Spartans in all 18 games. He contributed five assists last Friday. His ability to set up his teammates for great shot opportunities will likely be crucial tonight.

The Spartans also have some key reserves, including freshman Dane McLoughlin and junior Robert Scott, who together accumulated 14 key points last Friday. They will be relied on again to make an impact on the floor in tonight’s rematch.

The key to winning tonight will be defense. In the last matchup, the Spartans allowed five of the Judges to score in double figures, and five of the Judges scored above their averages for the season. At the same time, the Spartans need to continue to dominate on the boards just like they did last Friday, when they out-rebounded the Judges by 11. With these focuses in mind, the Spartans should have no trouble finishing on the right side of the scoreboard this time around.

The Spartans will don red uniforms to represent the Western Reserve Red Cats as part of Heritage Weekend. The game against the Judges will start at 8 p.m. and will take place as part of “Disco Night.”

The Spartans will then rematch last week’s 89-80 loss to New York University (15-2, 5-2) on Sunday, Feb. 5 at noon. The men will play in brown uniforms representing the Case Institute of Technology Rough Riders.