Men top Brandeis, fall to No. 16 NYU on Throwback Weekend 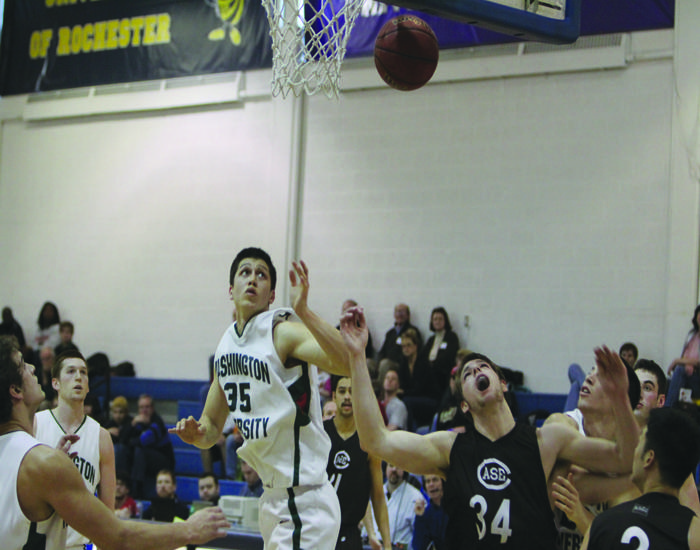 Despite an impressive victory against the Brandeis University Judges on Friday, the Case Western Reserve University men’s basketball team struggled on Sunday to a 98-85 loss against the UAA’s first place New York University. The loss dropped the Spartans’ overall record to 9-11 and 1-8 in UAA. The victory improved d3hoops.com No. 16 New York to 18-2 and 7-2 and tied them atop the UAA with Washington University.

Freshman Dane McLoughlin led the Spartans in both rebounds and points. McLoughlin was just one rebound shy of a double-double; he scored 15 points and grabbed 9 rebounds.

“We played well offensively but our defensive presence of mind was not all there,” said McLoughlin. “We just have to keep working together as a team and it’ll work out.”

Offensively, the Spartans performed well above par. In fact, this was the team’s third highest-scoring game of the season. Ten players contributed to the 85 point total, and of those, five reached double figures. Junior Austin Fowler had a superb performance with 14 points and 6 rebounds. Sophomore David Thompson, freshman Julien Person, and junior Robert Scott also scored in double figures for the Spartans.

Like McLoughlin said, the Spartans did not perform well defensively. They allowed two of the Bobcats to combine for more than half of New York’s 98 points. New York’s leading scorer, Carl Yaffe, was unstoppable on his way to 36 points. Their second leading scorer, Kyle Stockmal, scored 23 points. Yaffe and Stockmal each made five three-pointers. A minor victory for the Spartans was holding the rest of the Bobcats to single figures. The Spartans will need to work on how they close out onto shooters if they hope to turn their luck around in the next round of conference matchups.

This weekend, the Spartans will embark on their last road trip of the season to face two more tough opponents: Washington, which is tied atop the UAA with New York, and the University of Chicago, which sits at 13-7 overall and 4-5 in the UAA. When these teams came to Cleveland in January, they each left with victories. Despite their unfavorable away record of 2-5, the Spartans hope to come out on top this time around. They will tip off tonight in St. Louis at 9 p.m. and on Sunday in Chicago at 1 p.m. Live statistics will be available online via the WashU and Chicago athletics websites.