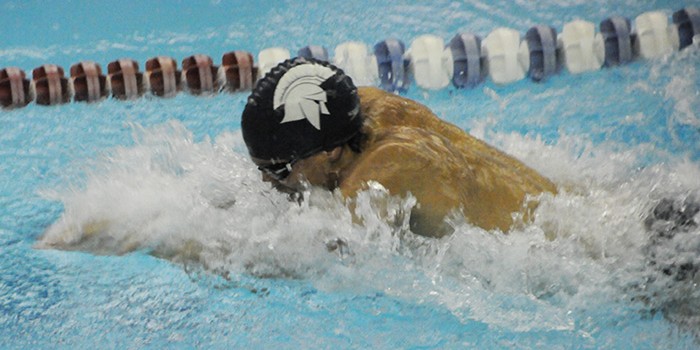 The No. 13 nationally ranked Case Western Reserve University men’s swimming and diving team won its third straight annual College of Wooster Invitational. The men swam to the team title with 23 top five finishes, including 11 on the final evening of competition. The women’s team finished fourth in the 10-team field as junior captain Maggie Dillione swam to two school records including a win in the 100-yard butterfly.

Gannon won the women’s portion of the meet, finishing with 1536 points. Edinboro finished second with 1429.5 points and the hosts, Wooster, came in third with 1262 points. The Spartan women finished fourth with 1110 points. Rounding out the top five was Westminster with 1084 points.

Case won the meet with a combined score of 2740 points and Gannon finished second with a score of 2599.5.

It wasn’t always smooth sailing for the men, who opened the meet in second place. Failing to win an event on the first day, the men opened the meet with a fourth place finish in the 200-yard freestyle. The quartet of sophomore Eric Haufler, junior Nick Clyde, sophomore Elliott Kerbel, and junior Gus Bailey touched the wall in 1:25.16

Bailey picked up a third place finish in the 50-yard freestyle with a season-best mark of 21.51 seconds. Clyde grabbed a top five finish when he touched the wall in the 200-yard individual medley in 1:56.64 – good enough for fifth.

The second day brought much better results for the men, as Clyde and junior Scott McHenry each won individual events and the men reclaimed first place overall. Clyde won the 400-yard individual medley with a time of 4:10.50, and McHenry won the 200-yard freestyle with a lifetime best of 1:42.43.

Clyde had a strong supporting cast in the 400-yard individual medley as three other Spartans finished in the top six. Sophomore Aaron Yeung finished third with a time of 4:16.00, junior Matt Flaherty finished fifth with a time of 4:20.01, and Karch Petersen finished sixth, touching the wall in 4:20.32.

Nickley finished fourth in the 100-yard breaststroke in 58.36 seconds and Bollinger finished fifth in the 10-yard backstroke in 52.05 seconds. The Spartans also finished the night with a first place finish in the 800-yard freestyle relay as Eric Haufler, sophomore Caleb Allen, junior Heath Hudgins, and McHenry touched the wall in 6:59.40.

Hudgins, Kerbel, McHenry, and Bailey finished fourth in the 400-yard freestyle in 3:09.17.

On the women’s side, the Spartans opened the meet in fourth place as junior Sara Tillie, freshman Rachael Loek, and juniors Catherine Gormley, and Dillione finished in fifth-place in a season-best time of 1:39.31. Tillie also placed third in the 200-yard individual medley in a time of 2:10.29. Case also finished fourth in the 400-yard medley relay in a time of 4:03.09. The quartet consisted of freshman Alison Thirion, Tillie, freshman Rebecca Pakradooni, and Dillione.

On the second day Dillione reset her school record in the 100-yard butterfly twice, once in the preliminary heats and then again in the finals. Dillione lowered the record to 56.25 seconds and earned a first place finish for her performance.

Tillie picked up a third place finished in the 400-yard individual medley in 4:39.46. Sophomore Brianna Cain finished the 100-yard breaststroke in second in 1:09.90.

The women also finished as runners-up in the 800-yard freestyle relay as Tillie, Thirion, Dillione, and Pakradooni finished second in a time of seven minutes and 47.36 seconds.

On the final day of the invitational, Dillione finished second and lowered her school record in the 200-yard butterfly to 2:06.00. The time was also good enough to qualify as a NCAA Division III “B” Cut.

Case is finished with its competition schedule until after winter break when they will travel to Allegheny College on Saturday, Jan. 19, to take on the Gators.