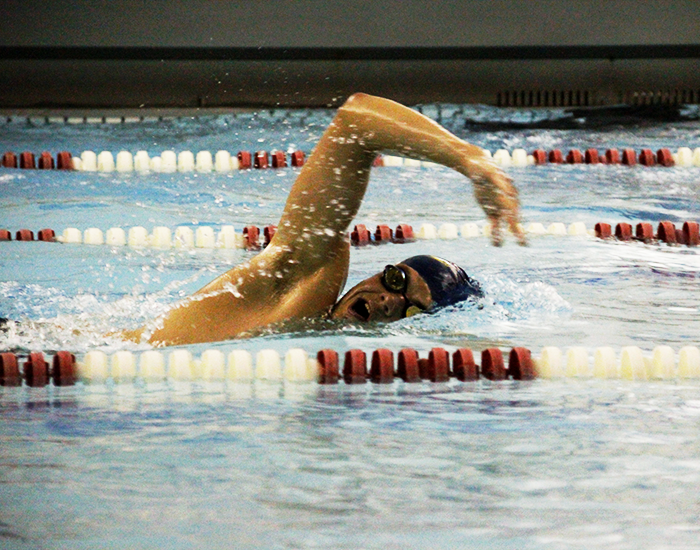 The Veale Natatorium scoreboard might have been broken, but the Case Western Reserve University men’s swimming and diving team was rolling on all cylinders.  The Spartans won 15-of-16 events; all but the 100-yard butterfly, as they cruised to a 228-70 victory over the Allegheny College last Saturday, Jan. 19.

The women came up with the short end of the stick, however, and, despite three wins from junior Sara Tillie, fell to the visiting Gators 150-149.

Junior Daniel Jacobson, who received his fifth career UAA Diver of the Week award with a win on both the one- and three-meter springboards, led the men.  The win was Jacobson’s second of the season, as he won the one-meter event with a score of 310.05 points, which hit a NCAA “B-Cut” mark.  He also won on the three-meter board with a tally of 281.50.

In addition to Jacobson, the men had two other double winners, as junior Sean Nickley won both breaststroke events and sophomore Alex Haufler took home blue ribbons in the 200-yard backstroke and 200-yard individual medley.

The women were led by Tillie, who had three individual wins, taking home firsts in the 100- and 200-yard freestyles and the 200-yard individual medley.

The Spartans also picked up first place finishes from sophomore Sophia Colevas in the 200-yard backstroke with a time of 2:14.67 and fellow classman Brianna Cain in the 100-yard breaststroke, who touched the fall first in 1:11.95.

The women also grabbed a victory in the 400-yard medley relay as freshmen Rachael Loek and Rebecca Pakradooni joined Cain and Dillione to finish first in four minutes, 10.19 seconds.

The Spartans will be back in the water this Saturday, Jan. 26, when they host Seniors’ Day against the women and No. 19 men of Ohio Northern University at 1 p.m.