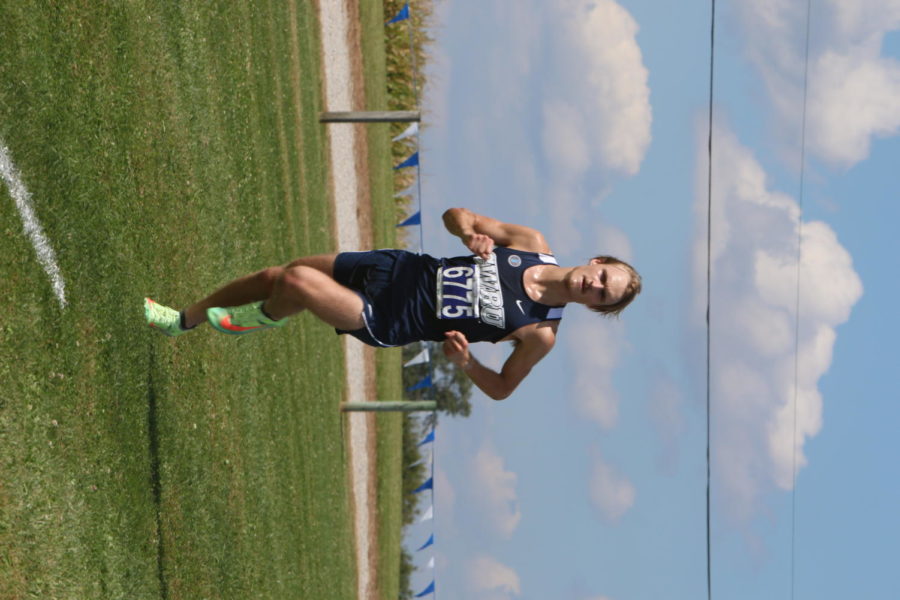 Jack Begley leads the team to a 4th place finish, as Spartans look forward to a team-building and record-breaking season

The Case Western Reserve University cross country teams ran out of the Mike Woods Invitational in Geneseo, New York this past Saturday with stellar results that were highlighted by a record-breaking performance.

The men’s team finished fourth out of 33 teams behind third-year athlete Jack Begley, who came in third out of 404 runners in the 8K run. For the women’s team, fourth-year Jana Fisher finished third out of 321 finishers in the 6K race and led the team to an overall second place position out of 29 teams.

Begley crossed the finish line with a remarkable time of 24:34.7, which was about 24 seconds behind the first place finisher Ezra Ruggles of the State University of New York College at Geneseo. With this time, Begley surpassed the previous program-record of 24:36.7 that was set by current fourth-year Trey Razanauskas at the Inter-Regional Rumble in October 2019. The accomplishment earned Begley the UAA Athlete of the Week honor as well as the Spartan Club Athlete of the Week honors.

This is not the first time Begley has garnered such awards: He was previously deemed a Spartan Club Athlete of the Week on Sept. 20 when he led the Spartans to a third-place finish among Division III teams and a seventh-place overall position at the All-Ohio Championships on Sept. 17. At this event, Begley placed second among 108 Division III athletes and 14th overall out of 243 runners with a time of 25:29.3.

At the Mike Woods Invitational, Razanauskas placed 13th overall with a mark of 25:13.8, coming in second for the Spartans while fourth-year Logan Singer contributed a 32nd place finish with a time of 25:53.7. First-years Aidan Nathan and Niles Tilenius came in fourth and fifth for the Spartans, with Nathan placing 45th with a time of 26:07.1 and Tilenius coming in 51st in 26:10.9.

The men’s team finished with 137 points and were bested by SUNY Geneseo (32 points), Middlebury College (78 points) and Otterbein University (91).

The women’s team brought in an incredibly strong performance spearheaded by Fisher, who finished the 6K route with a time of 22:03.8, coming in only 20 seconds slower than the winning time of 21:43.0 from Geneseo athlete Kathleen McCarey. Fisher’s mark was a career-best and earned her the Spartan Club Athlete of the Week honor.

Fourth-year Susanna Henry came in second for the Spartans and finished 13th overall with a time of 22:51.2. Fellow fourth-year Julia Kocherzat was the third Spartan to cross the line in 26th place with a 23:25.5 finish. Third-year Catherine Phillips placed 30th with a 23:30.9 mark while Medha Patria rounded out the top five Spartan finishers with a 48th-place finish at 23:53.7.

The women’s team finished with 118 points, coming only behind SUNY Geneseo (27 points). Middlebury came in third behind the Spartans with 129 points.

Coming into the invitational, the Spartans were aware of the tough competition ahead, especially given the competitive atmosphere of the opposing teams.

“We’re … looking at some of the top teams in the nation with the upward involvement of about 60 teams. It’s going to be a huge field,” remarked Head Coach Kathy Lanese in an interview with the CWRU Athletic Department. “We’re going to be able to see a lot of teams like Johns Hopkins [University], MIT, RPI, Middlebury and a lot of these names are teams that have been top of the country.”

“We’re also going to be able to get a little preview of the UAA [with Carnegie Mellon University, New York University and the University of Rochester being there]. We’re looking at half the conference … there,” added Lanese.

The athletes saw the invitational as a valuable experience that could generate stronger team chemistry and bring the team closer together.

“There’s some really good competition we’re going up against [at Mike Woods Invitational] this weekend and it’s going to be a really good experience for the team,” added third-year Parker Straight, “because we’ve been growing together, getting strong individually and dynamically as a group of individuals just learning each other’s strengths and weaknesses and learning how to lift each other up.”

The Spartans certainly met the challenge and may have exceeded expectations with the fantastic performances from both the men’s and women’s teams.

Looking ahead, the cross-country teams will travel to Oberlin, Ohio to compete in the Inter-Regional Rumble hosted by Oberlin College on Saturday, Oct. 16. Two weeks later, the Spartans will travel to Rochester, New York for the UAA Championships to round out the regular season. The NCAA Great Lakes Regional Championships will be hosted by Franklin University in Shelbyville, Indiana on Nov. 13 to kickoff the Spartans’ postseason. On Nov. 20, the Spartans will aim to shine on the greatest stage at the NCAA DIII Championships in Louisville, Kentucky.