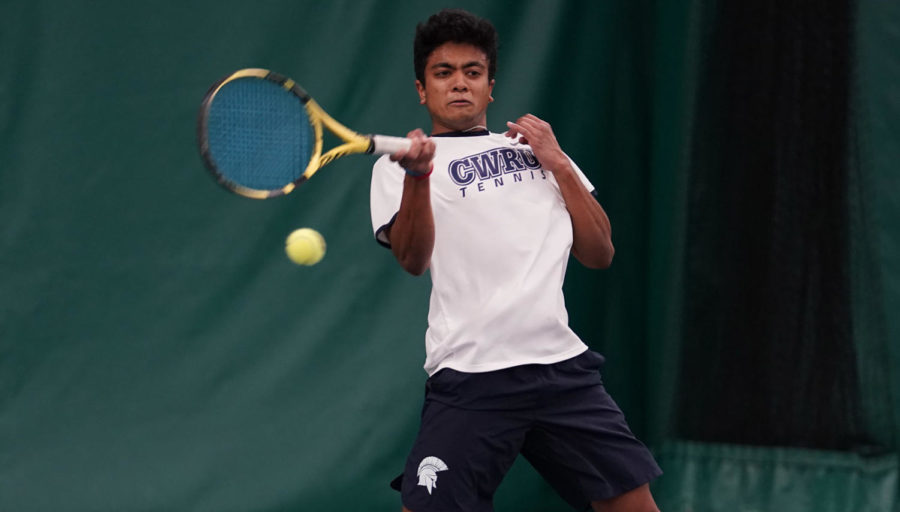 Fourth-year Chaitanya Aduru went 4-0 in his matches over the weekend, earning him the UAA Men's Tennis Athlete of the Week honor.

As the regular season winds down and the conference championships loom on the horizon, the Case Western Reserve University men’s and women’s tennis teams are rounding into their final form after sweeping their opponents this past weekend. The men’s team defeated North Carolina Wesleyan College (7-2) and Kenyon College (8-1), improving to a 17-2 record. Meanwhile, the women’s team sports a 15-1 record after taking victories over Christopher Newport University (9-0), Oberlin College (7-2) and Denison University (8-1).

Against the No. 13-ranked NC Wesleyan, the No. 1 CWRU men’s team fell behind early as the duo of second-years Vishwa Aduru/Sahil Dayal lost an 8-5 decision in second doubles. Third-year James Hopper/graduate student Jonathan Powell righted the course immediately with an 8-5 in first doubles. Fourth-year Chaitanya Aduru/third-year Michael Sutanto gave the Spartans a 2-1 lead in the match after taking an 8-6 victory in third doubles.

The Spartans swept the doubles against No. 24 Kenyon, with Powell/Dayal securing an 8-1 win in second doubles, Hopper/Sutanto winning 8-3 in first doubles and Chaitanya Aduru/Shah taking an 8-4 victory in third doubles. For the singles, Powell won third singles 6-4, 6-4 while Chaitanya Aduru battled in a tough second singles to earn a 6-2, 2-6, 6-3 win. Sutanto and Mahenthiran each played three-set matches to earn their victories at first and fourth singles, respectively. First-year Casey Hishinuma took a 6-1, 6-0 win in the fifth singles. Second-year Daniel French recorded the only loss for the day in the sixth singles match, falling 6-2, 6-4.

Chaitanya Aduru was named the UAA Men’s Tennis Athlete of the Week for his 4-0 performance over the weekend.

First-year Anna Kan, Kassaie and McCloskey came away with resounding victories in their singles matches, adding firmly to the team’s success in the doubles. Wang, meanwhile, came back from a first-set loss to win the match on a third-set tiebreaker 2-6, 6-2, 10-7. First-year Madeleine Eiss also claimed a comeback win—3-6, 6-1, 10-6—in fourth singles.

The Spartans defeated Oberlin 7-2 that Saturday afternoon. Kassaie/McCloskey recorded the only doubles win with an 8-1 victory in first doubles. After losing the second and third doubles, the Spartans swept the singles to earn their seventh straight win. McCloskey, who ranks 10th in the singles players in the Central Region, won 6-0, 6-2 in first singles, Eiss added a 6-1, 6-2 victory of her own at fourth singles while Kan came away with a 6-2, 6-1 win in fifth singles. Goculdas secured the Spartan victory in sixth singles with a 6-2, 6-1 showing. Third-year Savannah Bright and Patel recorded victories in third and second singles, respectively, to complete the match win.

The women’s team celebrated Senior Day on April 3 against Denison, honoring third-year Bright and fourth-years Eliza Georgiades, Nidhi Jha and Shreyaa Mukund. To add to the festivities, the Spartans demolished their opponents 8-1. CWRU came away with a 2-1 lead after Kassaie/McCloskey and Bright/Wang took victories in first and third doubles. Goculdas/Hoog fell 8-4 in second doubles.

The men’s tennis team will play three matches on the road to conclude their regular season. On April 10, they will compete against Kalamazoo College and the University of Michigan. Both the men’s and women’s teams will battle against Carnegie Mellon University on April 16 before heading to the UAA Championships in Altamonte Springs, Florida from April 21-23.