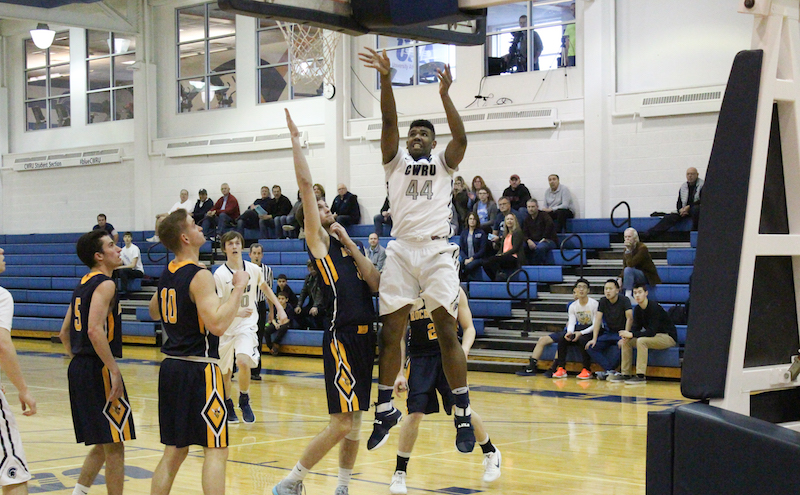 T.J. Duckett goes up for a layup after securing an offensive rebound. The men’s basketball team looks to rebound this weekend after losing five straight games.

Facing tough competition in their conference, the men’s basketball team dropped two games at home over the past weekend. Case Western Reserve University lost 91-81 to Emory University on Friday, Jan. 20, then they lost 80-61 to No. 7 University of Rochester Yellowjackets two days later. The Spartans fall to 5-11 overall and have yet to notch a win in five University Athletic Association (UAA) games.

CWRU held a sizeable lead against Emory in the first half, but the Eagles mounted a comeback, then padded their lead in the second half.

With just under 10 minutes to go in the first period, the Spartans held a 10 point lead. They increased their lead to 14 with over five minutes to play. For the rest of the half the Spartans went cold, and Emory tied the score with a 3-pointer on their last possession. A 3-point shot by third-year guard Jake Lavis gave the Spartans a slim lead going into the half.

With under 11 minutes to go in the game, a free throw from third-year forward Eric Black tied the score at 58. The Eagles went on a 12-1 run to take a double-digit lead with under seven minutes to play and never relinquished it for the rest of the game. The Spartans made the game interesting later, dropping the deficit to five points. Emory scored the next nine points, however, to put the game away.

The game against the highly skilled Yellowjackets was not as close. Rochester took a 4-2 lead and never let it go. In the second half, the Spartans trailed by as little as nine points, but they could not stop the relentless attacking Yellowjacket swarm. Rochester made 52.5% of their shots, with Ryan Clamage leading the way off the bench. He scored 19 points in just 22 minutes, more than anyone else in the game.

Leading the way for CWRU was third-year guard Colin Zucker with 15 points. Four Spartans, including Zucker, nabbed five rebounds a piece. The team was ice cold from the field, making just 33.9 percent of their shots for the game.
The weekend of Jan. 27-29 is the annual Throwback Weekend for both the men’s and women’s basketball teams. All four of the games will take place in historic Adelbert Gymnasium. The men will look to break their five game losing streak as they take on the University of Chicago tonight at 8 p.m. and face No. 8 Washington University at noon on Sunday. The team will wear throwback uniforms for both games. Tonight’s game will be a nod to the Western Reserve Red Cats while Sunday’s game will feature uniforms from the Case Institute of Technology Rough Riders.