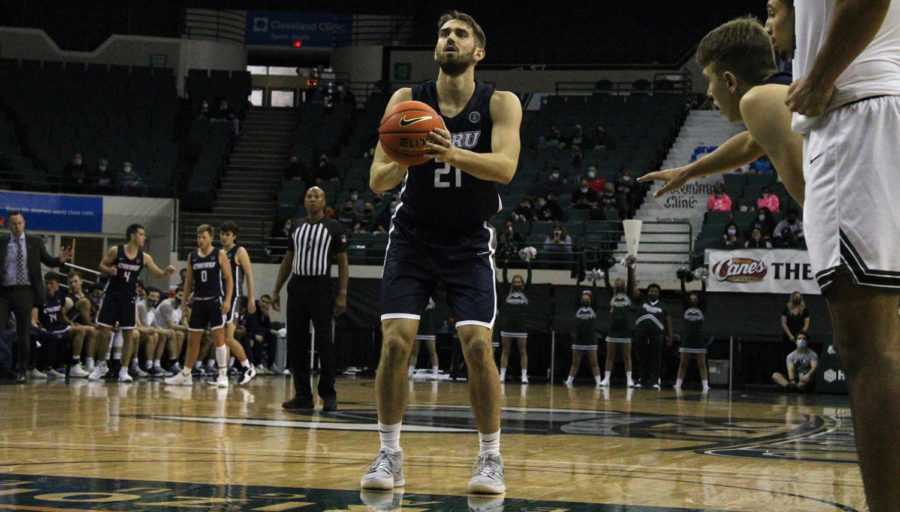 Fourth-year forward Ryan Newton (above) secured a CWRU victory in the final seconds of their conference opener ending with a score of 89-88.

The blistering season for the Case Western Reserve University men’s basketball team continued last week as the Spartans defeated Hilbert College and conference rival Carnegie Mellon University. The loss to the University of Wisconsin – Eau Claire to open the campaign sparked the Spartans’ longest win streak and the best start in program history.

Last Monday, the Spartans played in the final non-conference game of the season against Hilbert College in Hamburg, New York. The Hawks struck first with a quick layup within the first two minutes to go up 2-0, but the stalwart Spartan defense forced four straight misses, allowing CWRU to go on an 11-0 run in the next two minutes.

Following a 12-2 run and several strong defensive stops, the Spartan lead ballooned to 55-36 at the end of the first half. Nine Spartans scored up to this point, led by third-year forward Cole Frilling, who tallied 10 points with two three pointers, and fourth-year guard Robert Faller, who added nine points with one three pointer. CWRU’s defense was on full display, holding the Hawks to 35.1% shooting and recording six steals and seven blocks, including four from Frilling.

The offensive onslaught continued in the second half as CWRU maintained their double-digit stranglehold. Hilbert managed to cut the lead to 13 points but could not surmount a comeback. After taking a game-high 30-point lead with six minutes to go, the Spartans sealed a 22-point victory with a final score of 102-80.

Frilling led all players in points, finishing the game with 25 points after shooting 11-of-18 overall. He also recorded a game-high nine rebounds and added four steals, four blocks and four assists. Graduate student guard Mitch Prendergast pitched in 14 points on 6-of-10 shooting along with four assists and three rebounds while graduate student forward Brian Hines added 11 points on 5-of-7 shooting along with 3 assists and eight rebounds.

With the victory, the Spartans matched the longest winning streak in program history which was previously set in the first season of CWRU men’s basketball in 1971-72. CWRU improved to a 10-1 record and looked to take advantage of their momentum as they went against CMU in the conference competition opener.

The road trip continued last Saturday in Pittsburgh, Pennsylvania where the Spartans took on the Tartans in enemy territory. The first half started off incredibly close, with neither team being able to pull ahead by more than four points. With about two minutes until halftime, CMU strung together an 11-2 run that was capped off by three free throws after Faller committed the foul at the buzzer. The Tartans held a 47-34 advantage over the Spartans after limiting CWRU to 41.7% shooting and forcing six turnovers. CMU also made all six of their free throw attempts while the Spartans missed all four.

The Tartans extended their lead to a game-high 16 points with 18:06 left in the game. The Spartans, however, never gave up and slowly clawed their way back to single digits, cutting the lead to 78-79 for CMU with five minutes remaining.

As the half wound down, the Tartans held on to a three-point lead with 51 seconds on the clock, 87-84. Faller tied the game with a clutch three-point shot, his second of the day. With only 13 seconds left, CWRU committed a shooting foul that sent the Tartans to the line. CMU split the free throws and took an 88-87 lead with the ball in the Spartans’ hands.

Following a timeout, the Spartans ran a play that set up Frilling for a shot outside the paint. With just two seconds remaining, Frilling took the shot but it bounced out. Fortunately, fourth-year forward Ryan Newton was in the right place at the right time and, having sealed off his defender, tapped in the ball with his left hand at the buzzer to give the Spartans the impressive victory.

Prendergast scored a team-high 23 points on 9-of-17 shooting along with four assists and five rebounds. Faller dropped 22 points on an efficient 8-of-12 shooting and a perfect 2-of-2 from three-point land and grabbed seven rebounds. Coming off the bench, Newton tallied 13 points after going 5-of-10 from the field.

“Coach had kind of getting to the weak side because we were trying to get anything for Mitch [Prendergast] or Cole [Frilling],” reflected Newton on his game-winning tap in an interview with the CWRU Athletic Department. “[Frilling] got the ball and he got a pretty good look at a shot. I thought it was going to go in and I was 90% certain it was down. But it just tipped out and I got a hand on it. And that was that.”

The Spartans will travel to New York City on Friday, Jan. 14 to play against New York University in their second conference game of the season. NYU, which has gone 9-1 on the season so far, will certainly present several challenges for the Spartans.

“[NYU] is good,” said Coach McGuinness. “They’ve beaten people pretty easily and their only loss is on the road. They’re tough [and big]… They’ve got a real good center in Bobby Hawkinson [and] they run a good offense… It will be tough, every game from here on out is going to be a battle.”

Though the intensity will be high and the game will be incredibly difficult, the Spartans have no thoughts of slowing down.

“We just have to play well,” added Coach McGuinness. “NYU will be ready, but they haven’t played in five weeks. I think that’s a little advantage for us [since] we’ve played a couple games here and we’re getting our game back.”