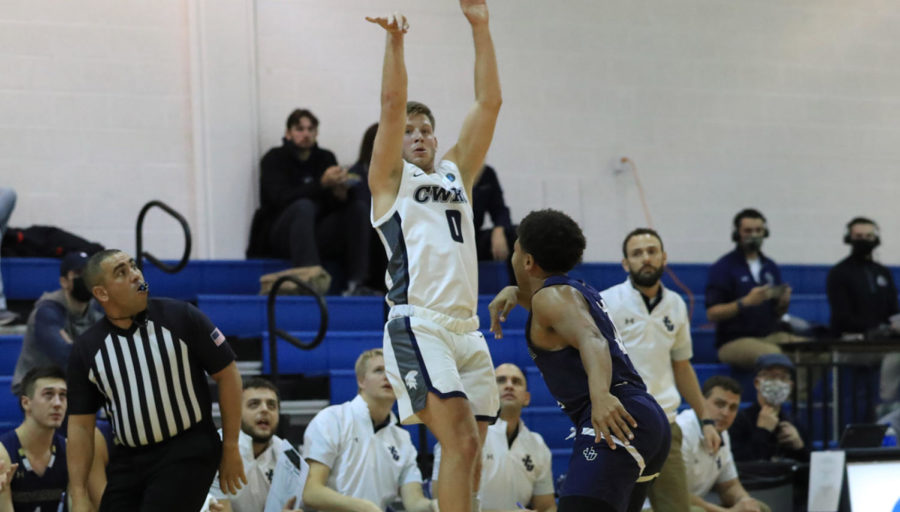 Graduate guard Mitch Prendergast (pictured) led all players to a victory against WashU, scoring a total of 18 points with 4 rebounds, 3 assists and 2 steals.

The Case Western Reserve University men’s basketball team picked up two home wins over the past weekend against the University of Chicago and Washington University in St. Louis. The Spartans, now on a three-game win streak, are 5-1 in conference games almost halfway through this segment of the season.

The Spartans and the Maroons opened the game evenly, trading multiple jump shots which included a successful 3-pointer from graduate guard Mitch Prendergast to give CWRU the slight 10-9 edge with 16:10 to go in the half. Chicago owned the next few minutes and jumped out to a 16-10 lead following a 7-0 run. Fortunately for CWRU, this would be their largest deficit of the game. The Spartans retook the lead with less than 11 minutes till halftime off of back-to-back 3-pointers from first-year guard Luke Gensler and fourth-year forward Ryan Newton, making it the score 20-18.

A quick layup put Chicago ahead to begin the second half, but the Spartans pounced to take a 45-39 lead with 16:35 on the clock, their largest lead of the game so far. The Maroons managed to cut the lead to just a 3 point difference following a made free throw on a foul. The Spartans again had an answer. Third-year Cole Frilling drilled a pair of free throws and Newton dropped in his second 3-pointer of the game to push CWRU’s advantage to 54-46.

The Spartans steadily increased their lead over the remaining 12 minutes due to their stagnant defense and fiery offense. CWRU finished off the Maroons 84-66 after a blistering second half where they shot 61.3% from the field and 53.3% from the 3-point line. The Spartans notably maintained an edge in rebounds (37-34), assists (19-8) and bench points (33-20) for the game.

Frilling led all Spartans with 17 points along with 7 rebounds and 3 assists. Fourth-year guard Rober Faller chipped in a strong 11 points, 7 rebounds and 4 assists. Newton and second-year forward Daniel Florey each contributed 9 points.

The Spartans then faced up against the third-ranked Washington University, who were coming into the game with identical records to the Spartans: 14-2 overall and 4-1 in UAA matchups. The game proved to be the most impressive win this season and arguably the greatest win in program history.

After opening the game down a handful of points for the first eight minutes, the Spartans went on a scoring run to go up 11-10 with 11:07 left in the half. Graduate forward Brian Hines kept the Spartans within striking distance, scoring the team’s first six points. Prendergast came alive on the offensive end, knocking down a 3-pointer and putting up a layup to give the Spartans that single point lead.

This effort sparked a 21-5 run that put the Spartans up 27-15 with about six minutes left before the break. Though the Spartans kept the pressure squarely on their opponents, the Bears found some momentum towards the end of the period and cut the gap to just seven points at the half with CWRU leading 39-32. The Spartans finished the half shooting 13-of-21 from the field after beginning with an abysmal 3-of-10. Washington shot an average 39.4% from the field and 33.3% from 3-point land.

Multiple 3-pointers and a 3-point play from second-year forward Hunter Drenth pushed the Spartan lead back up to 54-43 at 10:50 in the second half. However, the Bears would just not go away. Washington kept getting to the line and pulled within three points with less than four minutes left. Frilling and Newton converted a couple layups, but back-to-back 3-point shots from the Bears cut the Spartan lead to just one point, 67-66.

Prendergast came to the rescue, hitting two timely 3-pointers within the final 90 seconds of the game to maintain the gap at 73-68. With just 13 seconds left, Washington resorted to fouling to have a chance at closing the gap. The Spartans remained unfazed at the free-throw line and ran away with the road win 75-70.

Prendergast led all scorers with 18 points on 6-of-14 overall and 3-of-9 from behind the arc. He also added 4 rebounds, 3 assists and 2 steals. Frilling contributed a strong 15 points and 6 rebounds while Hines shot a perfect 6-of-6 from the field to finish with 12 points, 6 rebounds and 2 blocks.

The Spartans will now hit the road to play the same two teams this week. The road trip will begin at the University of Chicago on Feb. 4 and will be wrapped up at Washington University in St. Louis on Feb. 6. CWRU fans will have a couple chances to watch their fellow athletes play the following weekend when the Spartans come home for two games against New York University (Feb. 11) and Brandeis University (Feb. 13).