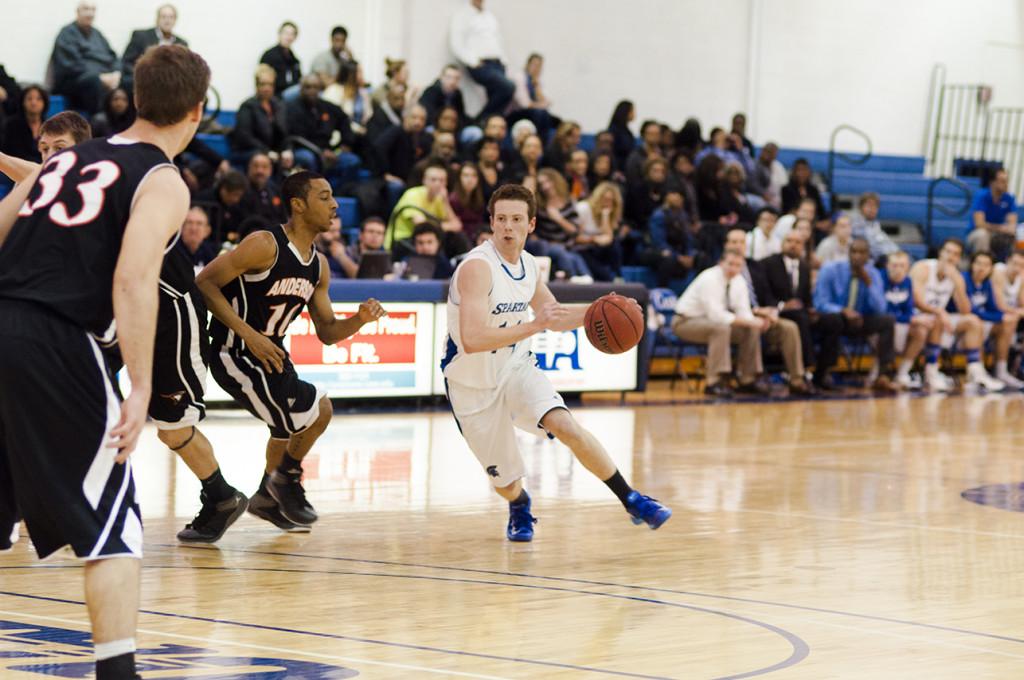 The men’s basketball team has continued its hot streak as the Spartans burned through Denison and then battled back against Allegheny. With two wins over the past weeks, the team stands at 4-1 with no indication of slowing down. “Many of the key contributions came from our bench” said head coach Sean McDonnell, “We supported each other and made the necessary plays to win.”

The Spartans had three players who posted double-digit scoring sheets in a strong 81-48 victory against Denison University at home. Dane McLoughlin led both sides of the court in points with 17, five behind the arc, on the game. McLoughlin started the game hot hitting three point shots on each of the Spartans first three possessions, making the score 9-0. Denison would come back within six twice early in the game but Spartans then went on a 11-2 run from which the Big Red would never recover. Case Western’s lead was at most 26 in the first half when Brian Klements hit a jumper just outside the paint to make the score 40-14 just under three minutes to the half. Klements would finish with 10 points on the night. In the first half alone the Spartans shot 7-13 for three pointers and 53.3 percent overall.

A 13-3 run late in the game put the Spartan lead at 34 with just 1:05 left in the game. Denison was unable to get within twenty the entire second half as the Spartans coasted to victory. David Thompson added to the team’s success with his double-double of 13 points and 10 rebounds, but it was the bench who closed out the game. “We were able to play several reserve players for extended minutes,” McDonnell said, “This will pay off down the road because those guys will help us win games this season.”

On the defensive side of the ball the Spartans played shutdown defense. The Big Red only made one of 17 attempts behind the arc and shot at only 25 percent on the game. The Spartans were led defensively by Thompson, who in addition to his double-double, added five blocks, moving him within one of the school’s career block record. The current record of 121 is held by Eric Duerr (Class of 2011).

Another double-double from Thompson boosted the Spartans to a narrow 74-71 win against Allegheny College this past Sunday. Thompson’s second double-double in as many games comprised of 17 points and 13 rebounds. It was extremely vital as Allegheny jumped out to an early lead giving Case an uphill battle. Allegheny led for most of the first half, twice building leads of 10 points, but Case was able to battle back to take a 37-35 lead with just over a minute left before the break. A 10-2 by the Spartans led to a two-point lead just seconds before the end of the half. Allegheny finished off the half coming back to tie the game at 47 apiece.

The second half was marked by a similar slow start for the Spartans. A seven point run at the 10:47 mark by Case tied the game at 60 apiece. A few minutes later Alvarez claimed the first lead of the half for the Spartans with a nice layup, to make it 69-67. With just 1:13 left in the game, following more than two minutes of tied play, Tim Chung hit the go ahead lay-up for the Spartans and the hung on for the extremely close finish. “I was proud that our guys battled back for a tough road win,” said McDonnell.

Since the season is broken up into halves due to winter break the team faces a unique challenge. The need to continue to train and practice around finals and during break is a huge challenge to any team. However the Spartans are dedicated to the season as McDonnell explained,” few people recognize the tremendous sacrifice basketball players make regarding winter break. Our players return to campus for practice on December 26. We will need to keep our fitness level high while we’re off because we’ll play five games in 10 days once we return.”

The team will face their toughest competition in the final part of the season. The Spartans will host a tournament in late December before embarking on the conference portion of their season. The team will play each University Athletics Association rival twice, once at home and once away to determine rankings within the conference. the team looks to improve on last year’s sixth place finish.

As the team looks to keep up their level of play they face one final challenge. The Spartans will face Oberlin College on Monday, Dec. 9 at 7:30 at home. The team will then take a 20-day break before hosting the Bill Sudeck Tournament starting on Dec. 29 against Heidelberg. While challenges face the team, as they move forward the season is full of promise after such a strong start. “It is not easy to play a college basketball game right before final exams, but our players will find a way to compete at a high level,” McDonnell said.