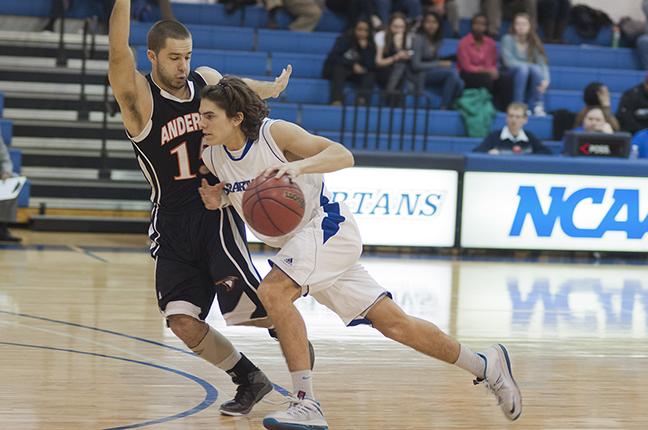 Javi Alvarez works against the defense versus Anderson during the season opener.

While the rest of the CWRU student body awoke late and rolled out of bed from their holiday food comas, the men’s basketball team was hard at work. The work paid off as the team has gone 5-2 since the last day of classes last semester.

The team’s dedication is easily seen in the Spartan’s 9-3 record, despite having to shake off the rust and work hard on developing a consistent defensive presence. The tools are in place for a great UAA season. “We lost our first game after 20 days off but bounced back the next day for our best non-UAA win of the season,” said head coach Sean McDonnell, “Our guys worked hard over break and we are ready for UAA play.”

Back on Dec. 9 the Spartans ended the semester on a strong note with a 78-68 win over Oberlin College at home. The Spartans were led by senior Tim Chung who scored a career high 24 points. The Spartans led from the midway through the first half and never led by less than five after claiming the lead. Chung received help from center David Thompson who posted his third double-double of an eventual eight game streak.

Case Western Reserve was handed its second loss of the season by Heidelberg University as the Spartans tried to battle back from a 36-21 deficit at the half. Thompson posted his fourth double-double and Chung led both teams with 21 points but the leading Spartans could not boost the team to a victory. Heidelberg started with a 7-0 run and would not give up the lead heading into the half. A strong 19-2 rally by the Spartans eliminated their deficit early in the second half but Heidelberg held on and took back control with a 4:43 left to play.

Four different Spartans reached the second scoring column with double digit games against Bethany College in the consolation of the Bill Sudeck Holiday Tournament. The game was strong turnaround from the team’s first game back from break. The Spartans started off with a 14-0 sprint out of the locker room to start the game. Bethany remained unfazed, however, and would come back to be down by only one at the half. Bethany grabbed its own first lead quickly, but multiple lead changes and strong play resulted in a 61 all tie when the final buzzer rang.

The Spartans broke a 63-63 tie in overtime with a five point run and in the extra frame, the Spartans broke a 63-63 tie with five points in a row as junior guard Julien Person hit a vital triple with just under three to play. Bethany wasn’t down, however, and scored six straight points to grab a 69-68 lead, but a jumper by Jimmy Holman following a steal by Chung swung the game back into Case’s favor and was sealed with free throws in the final seconds.

Following the Bill Sudeck Tournament, the Spartans got even better as they edged out John Hopkins University 81-77 in the opening game of the Juniata College Holiday Tournament. Down 37-35 at the half the Spartans would eventually go down by 10 before battling back with a 18-8 run. The two teams battled with out a clear momentum shift until the final minutes when Thompson connected with the three-point play to give the Spartans the win.

Thompson was the Spartan leader again with his seventh straight double-double despite the Spartans loss to Juniata College 74-64 in the Championship game of Juniata’s Holiday Tournament. Strong defense dictated the game as the Spartans were held to a mere 37.7 percent from the floor and only 18.5 percent from three point range. Juniata took control early with and led 41-28 by the end of the half. The Eagle’s lead would grow to as many as 16 as they easily handed the Spartan’s their third loss of the season. Despite the tough loss, Thompson and Dane McLoughlin were named to the all-tournament team for their strong play.

Later on in the team’s busy winter break, the Spartans finally had the chance to play Muskingum University. Third time really is the charm; this game finally followed through, as the first two games scheduled against Muskingum this season had to be canceled, the most recent due to bad weather. In their final non-conference game of the season the Spartans looked strong handing the Muskies a decisive 75-64 loss. Chung led the team in points yet again and Thompson recorded his eighth straight double-double. Chung hit a triple with 9:48 left to play in the game to start a 9-0 streak and the Spartans never looked back.

The Spartans now looked to their UAA season and started strong against Carnegie Mellon. “Our guys know that there are no nights off in the UAA—everyone is good. We need to play our best every game to get a win,” said McDonnell.

The buzzer sounded, and the ball rattled off the rim. The Spartans pulled off a comeback last Saturday night, and started their UAA conference play with a thrilling victory over rival Carnegie Mellon. A 13-1 run in the final minutes catapulted Case Western to an 84-81 win. With all five starters racking up double digit scoring tallies, the Spartans dug deep and pulled out a strong victory at home over the rival Tartans.

The Spartans came out strong hitting five from behind the arc and led by as many as 11, midway through the first half. Carnegie Mellon stormed back, however, following a 21-8 to grab a 43-39 lead at the half. The Tartans were quick out of the locker room following the half and rode their momentum to a 13-2 run and an eventual 16-point lead. The Spartans refused to go away with a 19-7 run to cut the lead to four with just under eight to play. Carnegie Mellon jumped back ahead but then had no response for the 13-1 Spartan run with only 3:27 left to play. A steal by Chung set-up Jimmy Holman for the go ahead bucket with 1:11 remaining.

The ability for the Spartans to battle their way back into games as served them well over the break. The ability to stay confident and calm, combined and the expert use of a deeply talented bench has been vital for the team. The Spartans improve to 9-3 for the first time since the 2005-06 season. “We had a great comeback in Saturday’s UAA win over Carnegie Mellon,” McDonnell said. “ We were down nine with 3:27 to go and our player kept competing. I’m very proud of them for that effort.”

The Spartans return to action with their first UAA weekend road trip of the season beginning at the University of Rochester (N.Y.) at 8:00 p.m. on Friday, Jan. 17. The team then flies south to battle Emory University (Ga.) at 12:00 p.m. on Sunday, Jan. 19. The trip marks the first of many road trips the team will make this season and will only be the latest challenge for them to face. However, the team is prepared for the challenges that lie ahead. “Everything needs to be done at a higher level when playing on the road,” said McDonnell “We need to show more focus in preparation, more attention to detail when executing, and more togetherness when facing adversity.”