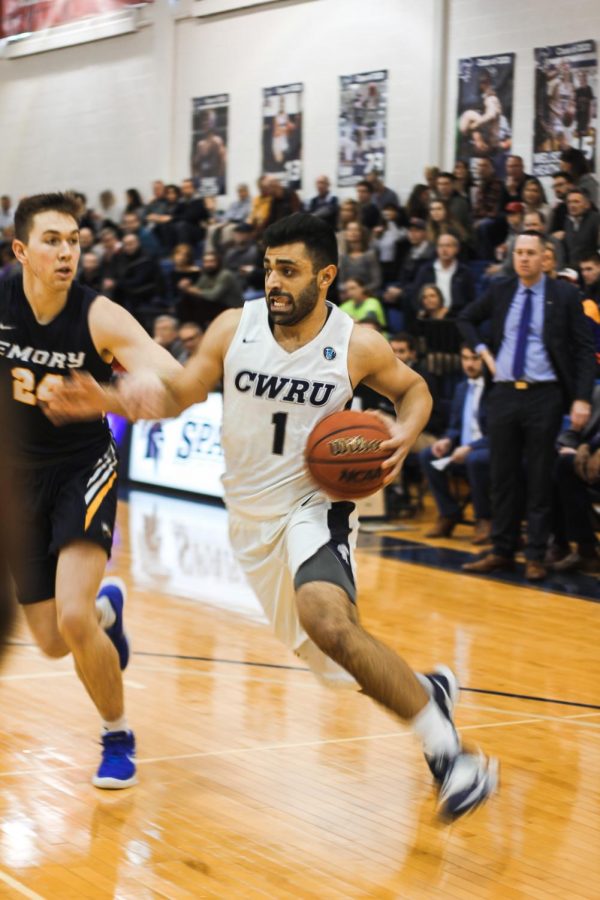 Monty Khela slashes for a layup

The weekend of Feb. 21 marked two successful games for the Case Western Reserve University men’s basketball team. The team won both of their final home games of the season to improve to a 13-11 record. With just one game remaining in the season, their wins against the University of Rochester Yellowjackets and Emory University Eagles cemented their chances of ending the season with a winning record.

The Friday, Feb. 21 game was everything a fan could ask for. The situation was riveting, since the Yellowjackets beat the Spartans in a tense overtime duel in Rochester just one month ago. Bitter from the 88-86 loss and determined to turn the tables, the Spartans once again found themselves in an overtime bout with Rochester, though they ultimately got revenge in a win with a surprisingly similar score of 88-87.

First-year forward Cole Frilling continued to shine and carried the scoring load along with fourth-year guard Monty Khela. The two combined for half of the Spartans’ points, with Frilling finishing just one rebound shy of a double-double (24/9/2/0/2) and Khela recording 20 points. Fourth-year forward Michael Hollis and second-year guard Robert Faller also performed well. Hollis scored 13 points and Faller came off the bench to score 14. When regulation ended and the score was tied at 77, the Spartans knew they couldn’t bear to lose to the Yellowjackets in overtime in both of their regular season contests. Frilling and Faller made a statement in overtime, leading the team as effectively as they had all season and combining for 8 of the Spartans’ 11 overtime points. Frilling’s back-to-back free throws were immediately followed by a 3-pointer which erased the 5-point deficit the Spartans had quickly accumulated, tying the game up at 83 points apiece with just a minute and a half to go. After the Yellowjackets broke the tie with a free throw, Khela hit a clutch jumper to put the Spartans up 85-84. In the final 17 seconds, Faller shot 3-for-4 in two separate trips to the free-throw line to build a 4-point lead as the clock wound down to three seconds. Rochester’s Ryan Algier drilled a three in the last two seconds, but it wasn’t enough, and so the Spartans walked away victorious.

The Sunday, Feb. 23 game was just as, if not more, exciting for the Spartans, as they knocked the Emory Eagles off the top of the University Athletic Association (UAA) conference. In January, The formerly No. 1 ranked Eagles handed CWRU a devastating 106-70 loss. This time, however, the Spartans had the upper hand at home and won 83-78.

Frilling and Khela continued their weekend of dominance, with Khela dropping 30 on Emory. Khela’s season-high in points and Frilling’s 24 points and 9 rebounds once again proved the duo’s scoring prowess, as they combined for 54 of the Spartans’ 83 points. Faller’s routinely dependable work coming off the bench also played a big role in the win, as he tallied another 16 points for CWRU. Hollis and Frilling led the defensive effort for the Spartans, each grabbing 7 defensive boards, tied for the game-high with two Eagles. Hollis also recorded a game-high 4 offensive rebounds. Overall, the Spartans did better than their fearsome opponents by every shooting metric and also logged 4more assists and 2 fewer turnovers.