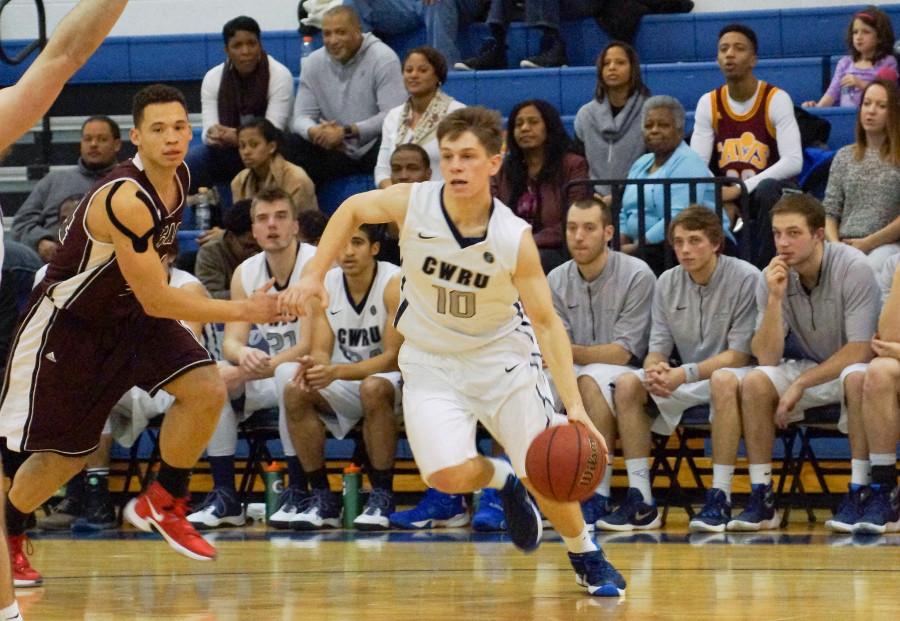 Colin Zucker drives toward the basket earlier this season. The Spartans split their games last weekend against tough UAA opponents and look to take advantage of their home court this weekend.

The Case Western Reserve University Men’s Basketball team picked up an important win this week, ending a four game losing streak. The team split the weekend, winning at Brandeis University and losing against New York University. The team is now 9-9 on the season and is 2-5 in the University Athletic Association conference.

“The UAA is one of the best basketball conferences every year so we know going into it that it’s going to be a grind,” said fourth year student and point guard Jimmy Holman, “One of the biggest challenges is managing the long travel weekends that make it extremely difficult to win on the road. The UAA has top talent across the board and excellent coaching, so you know you can’t win unless you play a great game.”

In the first game against Brandeis, the Spartans picked up a key victory winning 84-80. Spartan second-year student and forward Eric Black and fourth-year student and guard Matt Clark each had 17 points to lead all scorers in the game. The game was a nail-biter throughout, with neither team able to build a large lead. After building a 21-12 lead with 12:26 left in the game, the Judges responded with a 9-1 run to tie the game up. Forcing 16 first half turnovers, the Spartans finished the first half with a 45-44 lead. Clark led the way with 11 points and five assists. Holman also added to his record-holding assist total, with four more against the Judges.

“I’ve always really enjoyed finding teammates for open shots,” said Holman. “As a point guard I feel that it’s a big part of my job. I’ve played with some really great shooters during my career and my job is really easy when I’ve got players around me who I know can finish the play.”

The Spartans made sure they finished the plays as they surged ahead in the second half. Black was key in pushing the Spartans ahead, scoring the first seven points for the team as the Spartans built a 73-61 advantage with just under 10 to play.

Once again, however, the Judges would not go away, forcing an 83-80 score with just under a minute. The Spartans would prevail as they caused a timely turnover with 30 seconds left and hit their free throws to seal the win. Neither team had fast break points in this slow-tempoed game. The Spartans had 19 assists in this game versus only 11 Judges assists.

In the second game against 22nd-ranked New York University, the Spartans were defeated handily 100-82. The Spartans held their own for the first half and parts of the second half but were unable to close out the game. Matt Clark had 19 points in the effort. After the game had numerous lead changes through the first five minutes, the Spartans built a 21-14 lead. NYU responded, going on a 17-5 run to take the lead 31-26 with just over seven minutes remaining in the first half.

When asked how to prevent teams from scoring inside, head coach Sean McDonnell said, “Their big guys hurt us last Sunday, especially in the second half. We’ll need to take better shots and make a few more so we can set our defense.”

The Spartans got back on the win column this weekend, but are still 1-5 in their last six games to fall to .500.

When asked about how to get two key wins this weekend, McDonnell said, “We want to make our opponents uncomfortable because if UAA teams operate in a comfort zone, they’re all incredibly tough to beat.”

“I think we have to take advantage of playing at home,” he said. “We know we’re going to have a good crowd and a full week at home to prepare. If we use those two things to our advantage we can be really successful this weekend.”

The Spartans will look to take advantage as they host Brandeis University on Friday, Feb. 5 and New York University on Sunday, Feb. 7 in Adelbert Gymnasium.