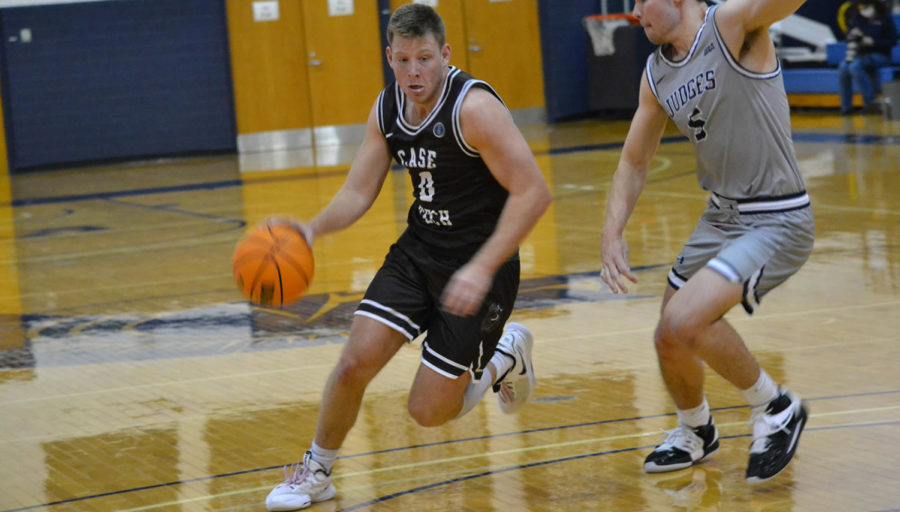 Graduate guard Mitch Predergast recorded a career-high 28 points against Brandeis to tie the program's record of 18 wins in a season.

Last Friday, the Case Western Reserve University men’s basketball team had the opportunity to match the program record for wins against New York University. However, the Spartans couldn’t surmount a comeback against the Violets and were delayed in achieving this milestone. The team dominated against Brandeis University on Sunday to reach an overall record of 17-4 and 7-3 in the UAA conference.

The Spartans opened their two-game homestand against New York University and quickly found themselves fighting an uphill battle. The Violets went on a 7-0 run to begin the game after pushing the pace following CWRU’s missed shots. Graduate guard Mitch Prendergast’s free-throw line trips ignited a 15-0 run that put the Spartans on top 15-7 that concluded with a quick fastbreak layup from graduate forward Brian Hines.

NYU chipped at the deficit and eventually took the lead 21-20 with less than 10 minutes left in the half. The game went back-and-forth for a couple possessions before the Violets started building their lead again. NYU took advantage of CWRU’s defensive lapses and scored easy points at the rim and from the free-throw line to reach their largest lead of the half at 30-22.

Second-year forward Daniel Florey put a stop to NYU’s 9-0 run with his first 3-point jumper of the game. Fourth-year forward Ryan Newton scored the Spartans’ next five points with a successful trip to the free-throw line and a made 3-point shot to cut the gap to 33-30. The Spartans couldn’t completely close the gap by the end of the half and finished with a layup from third-year forward Cole Frilling to make the score 37-32 heading into the break. Both teams shot 33.3% from outside the arc but NYU had the advantage in field-goal percentage (42.9% to 31.3%) and successful free-throw attempts (10-8) for the half. The Violets also held a stark advantage in rebounds (23-15) which accounted for their handful of second-chance points.

The Spartans made three unanswered jump shots to take the 38-37 lead to begin the second half, but the Violets never let the game get away from them. The Spartans had built some momentum on the offensive end but an emphatic Violet dunk sapped it away. NYU clearly fed off that explosive energy and knocked down two straight 3-pointers to stretch their lead to 56-45.

The Spartans changed their tactics and started getting into the paint more. Second-year forward Hunter Drenth and Prendergast each knocked down a pair of free throws and cut the Violet’s lead to 60-54. Florey hit his second 3-pointer to bring the Spartans within striking distance at 62-59. With about five minutes left in the game, a comeback win seemed attainable. Hines slipped in a layup and fourth-year guard Robert Faller drilled a 3-point shot to tie the game 64-64. The energy was through the roof in the Horsburgh Gymnasium as the fans sensed a potential win for the home team.

NYU had other plans. A couple exchanged shots later, the Violets held a 69-68 lead with less than 90 seconds left in the match. Coming out of the time out, the Spartans couldn’t execute on the play and had to resort to the foul game. Ultimately, NYU’s free throws put the game out of reach and the Spartans lost 77-70.

CWRU was severely lacking in offense for the game and had only two players scoring in the double digits. Frilling led the Spartans with 25 points, 7 rebounds and 2 blocks and Prendergast added 11 points and 4 rebounds. Faller chipped in 9 points, 5 rebounds, 3 assists and 4 steals.

The loss marked the fourth for the season and the first time the Spartans dropped two games in a row.

Though Brandeis tried to bridge the gap, the Spartans’ stellar shooting kept them out of close distance. Prendergast made a 3-pointer and a layup on a fast break to bring the team up 40-27. About half a minute later, Newton flew in for the dunk to cap off the Spartans’ scoring for the half. With the momentum clearly on their side, the Spartans closed out the half with a 42-31 lead.

Coming into the second half, Brandeis held onto hope for a comeback. They knocked down two shots to bring the CWRU lead to single digits. Unfortunately for them, Hines scored back-to-back layups and Prendergast hit another 3-pointer that pushed the Spartan lead to 49-35. The Spartan advantage would climb as high as 22 as they ran away with the 80-66 victory to finish the weekend.

Prendergast recorded a career-high 28 points on 10-of-16 shooting overall and 6-of-10 from the 3-point range. Frilling contributed 16 points and 3 rebounds while Hines added an all-around game with 10 points, 10 rebounds and 2 blocks.