Men’s basketball wins and loses on smallest of margins

Close battles for the Spartans make for exciting Throwback weekend 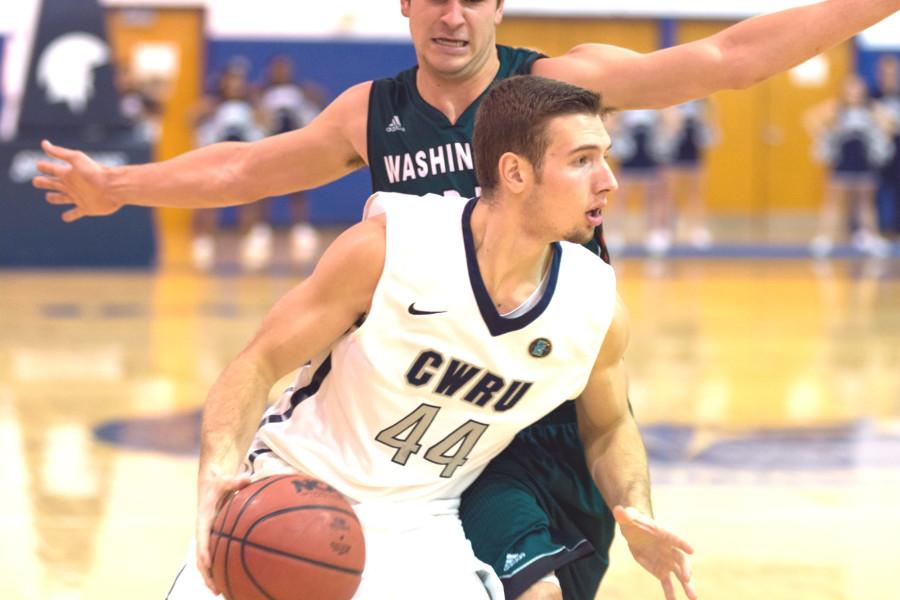 The Spartans split the weekend at home, beating Brandies but then falling to NYU.

In the first matchup against Brandeis, the teams battled back and forth for the majority of the game with the Spartans winning 74-72. In a second half that featured neither team leading by more than four points, the Spartans sealed the victory thanks to second-year forward Eric Black hitting two free throws with just over five seconds left in the contest. “It’s great to get a quality win at home against a good team,” said third-year guard Javier Alvarez, “The energy in Adelbert was crazy, the fans really helped contribute to the win.”

Thanks to the play of fourth-year guard Matt Clark and Alvarez, the Spartans stayed on top of the Judges throughout, with the end of a hectic first half seeing the Spartans up one. Alvarez was the leading scorer in the game posting 17. “ Our coach was stressing the importance of attacking the basket against their big man,” said Alvarez, “Once I was able to get a few lay ups to go in I felt more comfortable and got into a rhythm. My teammates also did a great job of playing unselfish basketball and finding me open shots.”

With 3:21 left in the game, Clark hit two key free throws to put the Spartans up four and in good position. The Judges responded by tying the game with just under two minutes left. The Spartans regained the lead when Colin Zucker stole the ball which led to a foul against Alvarez, who converted both shots to go back up by two. Zucker had a few big plays for the Spartans, helping with rebounds and assists rather than points. “ I try to help the team by being aggressive and by hustling, whether that is coming up with a rebound or playing defense to force a steal,” said Zucker.

The lead wouldn’t hold however as Brandies scored again to tie. With the game still tied with 39 seconds left, Black drew the foul and hit the free throw shots to win the game for the Spartans.

In the second matchup of the weekend against NYU, the Spartans looked to revenge a loss last week, this time donning Case Institute of Technology uniforms for Throwback Weekend. Unfortunately that would not happen as the Spartans had a heartbreaking loss 80-79. Second-year guard Jake Lavis led the way for the Spartans with 18 points, including an incredible 10 points in the final six and a half minutes of the game. Lavis shot a remarkable four-of-six from the three point line. While the Spartans started the game off well, building a 13-9 lead in the early going, a large 16-3 run by the Violets quickly erased that as NYU had a 25-16 advantage with 11:33 left. The Spartans built up some more points right before the half, but an 8-0 run by NYU eliminated that as the Violets took a 42-36 lead into the half.

The Spartans responded quickly with a pair of threes from fourth-year student and guard Jimmy Holman and second-year forward David Black. The Violets began to pull away, holding a 69-58 advantage with 7:13 to play. The Spartans showed resilience, however, and began to chip away at the lead. A 9-0 run by the team put them up three with 2:57 left.

In an exciting last few minutes, the Violets regained the lead, only to see CWRU take it back, holding a 77-76 advantage with 28 seconds left. The Violets would respond, however, converting a layup to take the lead for good, as a last minute effort did not prevail. Head Coach Sean McDonnell, on the comeback, said, “Our guys showed great resilience … We struggled to get a few key free throw rebounds and that ended up being the difference.”

The Spartans are now 10-10 on the season and are 3-6 in University Athletic Association play. When McDonnell was asked what the team needed to do to finish the season strong, McDonnell responded, “The most important game of our season is our next one, this Friday at Wash U.”