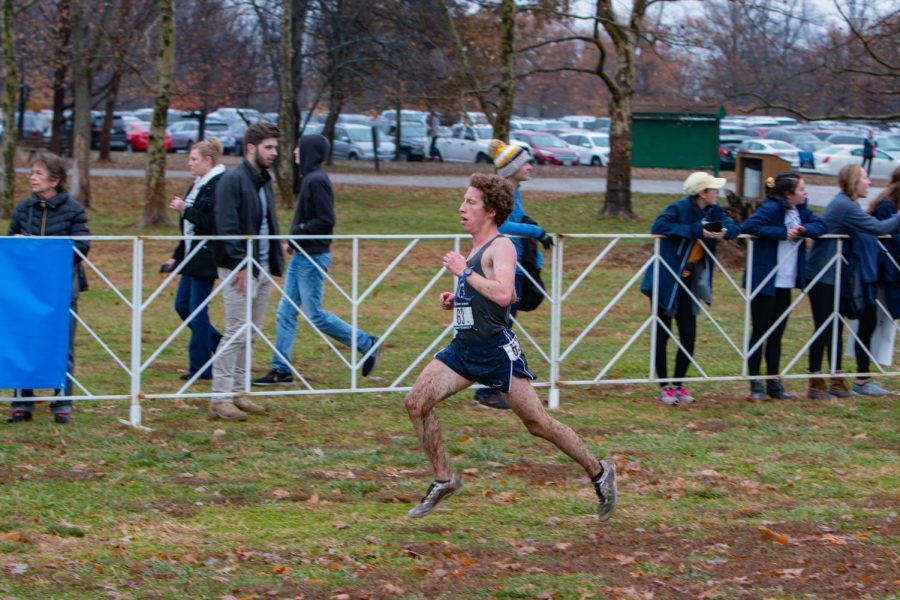 David Hall, above, and the other men’s cross country runners decreased their points by 136 points together between their first kilometer and the last.

The place? E.P. “Tom” Sawyer State Park in Louisville, Kentucky. The time? 10:45 a.m. on Saturday, Nov. 23. The conditions? Cold, wet and muddy. Standing at the starting line are seven runners, who, after thousands of miles of training, are ready to represent the Spartans at the national level.

The gun goes off. The Spartans are lost in a sea of runners. All 280 runners come through the first kilometer within 20 seconds of each other. The race still has not split into packs yet, a seemingly endless river of runners flow past the first mile in a blur of mud and spikes. At two miles, the river thins out, and individual runners are now visible. At the national level, it is common for athletes to get lost in the excitement and go out too fast, but the savvy CWRU runners went out at a more conservative pace. Seeing Spartans so far back in the pack may have shocked spectators, as the team was 28th up to the second mile. But the Spartans continued to race smart, and they slowly went up in place from 28th at the first kilometer, to 27th at 4k, then to 24th at the 4 mile mark.

The rain had been coming down, on and off, the whole morning. While it held off during the actual race, a steady downpour earlier had turned the course into a mudpit. The constant beating of spikes upon the ground churned the mud up so that racers had to pull each foot free from the earth before taking the next step. This extra challenge drained many runners, especially those that had gone out too fast, but it did not affect the Spartans. Between the 4k and 4 mile mark, the team dropped an impressive 81 points and dropped another 5 before finishing at 593. Their total difference in points between the first kilometer and the end of the 5 mile race was an awe-inspiring 136 points. This serves as a testament to the efficacy of their race strategy.

The Spartans finished 24th overall. The first to cross the finish line for the team was Yoshmar Pinal-Alfaro in 25:31:2. Less than 4 seconds back was Trey Razanauskas, who finished in 25:34.8. The two third-year runners were followed by first-year Robert St. Clair with a time of 25:50:5. Coming through in 25:55:5 was fourth-year David Hall. Closing out the scorers for the Spartans was first-year Jack Begley with a time of 26:04:2. Next to finish were second-year runners Logan Singer and Alex Loeper, who finished with times of 26:40:8 and 27:06:4, respectively.

While this may be the end of the cross country season, many Spartan runners will be competing in their track season opener this Saturday, Dec. 7 at 11 a.m.