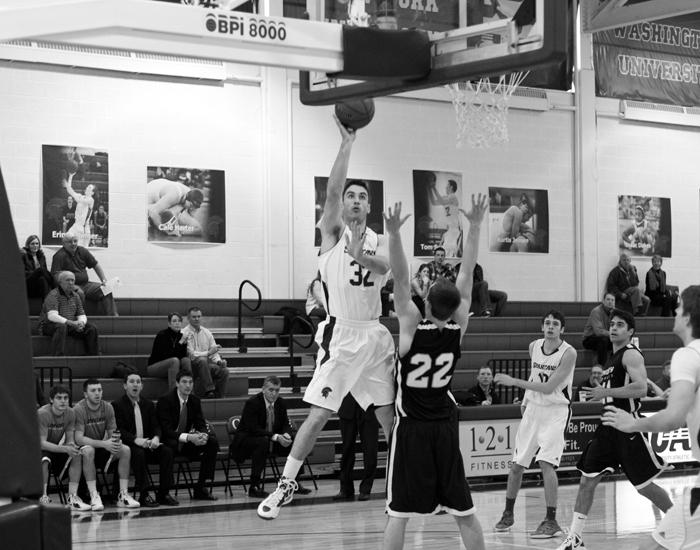 This past weekend was an exhilarating one for the Case Western Reserve University men’s basketball team. It would have been perfect had they finished with two wins instead of one, but it was thrilling nonetheless.

The weekend began with Friday’s game against the University of Rochester Yellowjackets (16-8, 7-6). Back in January, Rochester’s home-court advantage provided an extra boost, as they ran away with an 86-68 victory over Case (10-14, 2-11). This time around, Case had the home-court advantage, which helped them upend Rochester in an uncomfortably close game. With seconds remaining, the score was 74-73 in Case’s favor; freshman Dane McLaughlin secured the win for the Spartans by making the final two free throws of the game.

Every one of the players that stepped onto the floor for the Spartans last Friday contributed to the well-deserved victory against Rochester. Seven of the eight players in the box score contributed to the team’s total of 76 points, and five of those seven players scored in double digits. Tom Summers, the team’s only senior, recorded the only double-double for the Spartans with a total of 15 points and 10 rebounds. Junior Austin Fowler also scored 15 points and was just one rebound shy of a double-double. The other three players to score in double figures were junior Robert Scott with 13, freshman Jordan Dean with 11, and sophomore David Thompson with 10.

Unfortunately, Sunday’s game against the No. 18 Emory University Eagles did not end as well. The nationally ranked Eagles (19-5, 8-5) ran away with the 105-71 victory. They are the only team this season to break into triple digits against the Spartans. Case had three players score in double figures. Fowler led the team with a total of 22 points, and Thompson and Summers provided stellar performances, contributing 11 and 10 points respectively. However, Case allowed four of Emory’s players to score in double figures, with two of them scoring more than 20 points. The Spartans’ disappointing defensive slump allowed Emory to clinch the win.

Nonetheless, this weekend was truly special for the lone senior, Tom Summers, for a number of reasons. First of all, Friday was senior night. Before the game, Summers was honored for his outstanding contributions to the program. Secondly, Summers was the leading rebounder and scorer for the Spartans on Friday, which made the victory even more memorable. He only needed 10 points to join the prestigious list of men’s basketball players to have scored a career total of 1000 points or more. Joining the 1000-point club is one of the greatest achievements a player can earn after four years. Summers’s 15 points on Friday and his 10 points on Sunday combined to give him a career total of 1,015 points.

Summers stands to improve on this total as the Spartans embark on their final game of the season tomorrow at Carnegie Mellon University (8-16, 3-10). A win over the Tartans would give Case a share of seventh in the UAA. The Spartans topped Carnegie Mellon last year at home in the season’s final game 71-54 in a battle for sixth. Tip-off is scheduled for 5 p.m. Live video will be available via the Carnegie Mellon athletics website.