Men’s soccer all tied up after Denison Invitational 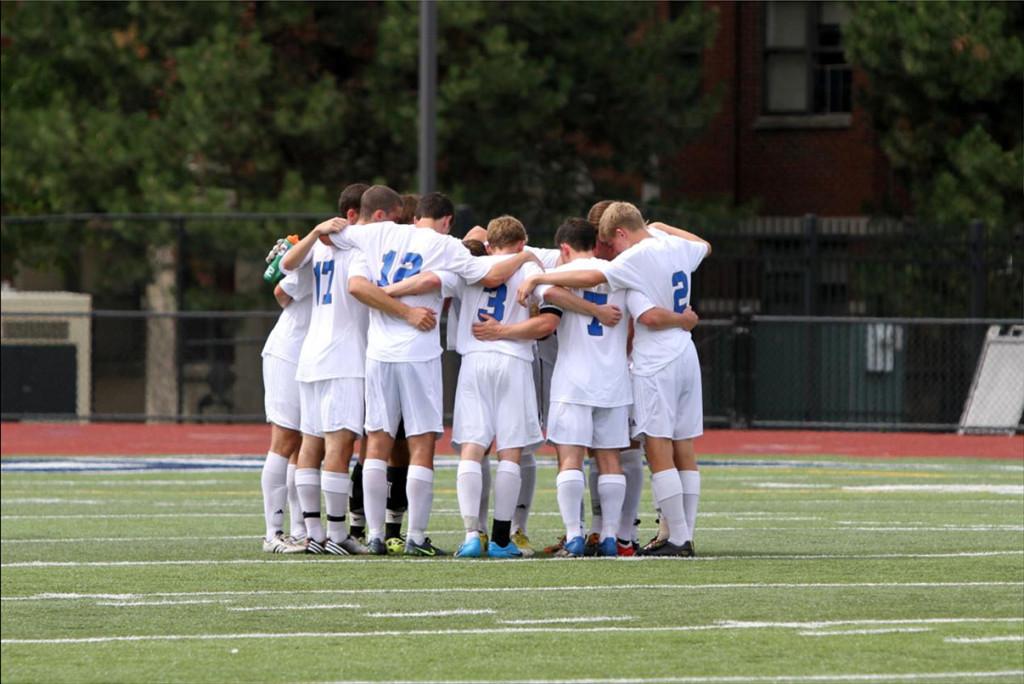 The Spartan men’s soccer team is 0-0-1 coming off their opening weekend. (2012 team pictured)

Following the open of the season, the Spartans men’s soccer team is looking at a record of 0-0-2. The Spartans tied both Sewanee University and Washington and Lee University by scores of 1-1 in the first two games of the season at the Denison University Invitational. Even though the games weren’t losses they were “A bit of a disappointment,” said Head Coach Brandon Bianco. Any close contest, especially back-to-back ties, can leave the team feeling defeated. However, the Spartans are optimistic going forward. “There are lots of positives from the weekend,” Bianco said. “It was encouraging.”

In the season opener Friday evening against the Sewanee University Tigers, the Spartans went ahead early on midfielder Chris Cvecko’s shot from just outside the 18-yard box in the eleventh minute. However, the Tigers responded soon after with a header that snuck past starting goalkeeper Jay Darby. The two teams battled through the rest of regulation and into overtime putting up a combined 37 shots, including two in the final six minutes by Case midfielder Jacob Grindel. The game remained tied due in part to Ari Lewis, the freshman goalie from Jericho, NY, who had four saves in his college debut for the Spartans.

In the second game of the invitational Case Western again scored first, this time early in the second half as Matthew Zembas beat the Washington and Lee University Generals’ goalie. Zembas scored in the fifty-first minute. It was his second career goal. However the Spartans were again unable to hold on as the Generals’ forward beat Lewis. Saturday was Lewis’ first career start, after the strong showing on Friday, where Lewis made five saves against the Generals, including an important stop in overtime. Unfortunately the game was cut short after a lightning delay forced the officials to call the match in during the first overtime.

The close games this past weekend have been the focus of the team this week in practice. “We didn’t pull it off,” said Bianco. The Spartans understood what was needed. While the team played two good games, the two biggest concerns for Bianco were the shape of the defense and the need to push up on offense. With so many shots, especially against the Sewanee Tigers on Friday, the Spartans are looking to spark their offense.

They will need to be more aggressive and push numbers into the box, according to Bianco. They have spent the week practicing and focusing for their game against the University of Pittsburgh-Greensburg next Saturday. “We are lucky to have no midweek games, it allows us to focus.” Bianco said. The 1:00 p.m. game tomorrow will mark the start of a three-game road trip for the Spartans. After the game at Pittsburg-Greensburg, they are playing at Baldwin Wallace on Sept. 11 and at Penn St.-Behrend on Sept. 17. These games lead up to the home opener against Franklin on Sept. 21.

Even though there is still a zero in the wins column, Coach Bianco and the team are positive about the season’s outlook. By focusing and making adjustments in practice this week they are moving forward with a strong mentality. “We don’t compare or think about last season,” Bianco said. Hopefully the focus and practice pays off as the team looks for its first win of the season tomorrow afternoon.