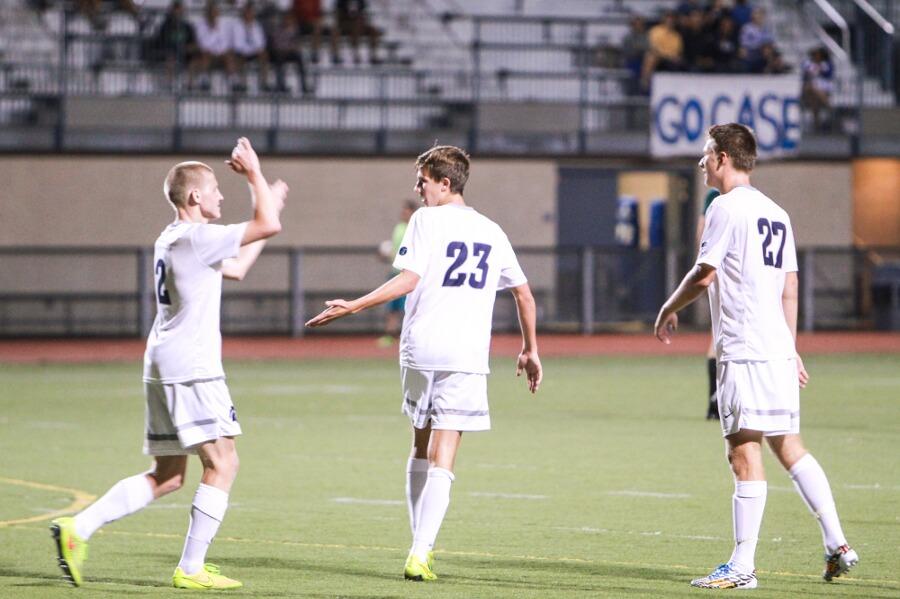 The Spartans tallied all their goals in the second half. Freshman Michael Balog, junior Chris Cvecko and sophomore Brandon White all found the back of the net.

The Spartans and the Quakers traded a flurry of shots for the first 45 minutes of play with both teams trading possession and making strong runs into the box. No one was able to find the back of the net, despite the 13 shots in the first half between the two teams.

Balog broke the scoreless tie in the 49th minute, breaking down the right side of the field unassisted and driving home his fifth goal of the season, giving him the team lead in that category. Balog now has six goals on the year including Wednesday night’s game where he added another, and has three assists to add to his already impressive freshman season.

Balog’s six goals come off of 25 shots and he has done a great job selecting shots.

“Michael has started well, is very talented and has benefited tremendously from the work of the players around him,” said head coach Brandon Bianco of the freshman’s quick success. He went on to cite junior forward Matt Zembas as an excellent role model for Balog, and credited the team’s second line for providing the forwards so many scoring opportunities.

Balog added offensively when he assisted on Cvecko’s goal at the 72:03 mark. Cvecko followed Balog’s example of an assist following his goal and helped White pound the final nail in Wilmington’s coffin when White found the back of the net just over six minutes later at the 80:48 minute mark.

Balog and Cvecko were the hot feet again the following Wednesday; both tallied a goal in a 2-0 win against Hiram College, with Balog scoring one and assisting on the second.

Much like the previous match, the Spartans went into halftime tied 0-0. Balog broke the hard fought tie for the second straight game on an unassisted shot and found the back of the net in the 47th minute. Cvecko finished off the Terriers with his own strike just over nine minutes late. The Spartan’s ability to mentally and physically outlast opponents has been crucial to the team’s late-game success throughout the year and was seen in full force this past week.

Case’s freshman goalkeeper Calvin Boyle now has five wins on the year. Boyle notched five saves in the Saturday night shutout and needed only two saves in Wednesday’s match. Also, the squad remains undefeated on their home turf; they are now 4-0 on the year at DiSanto Field.

The Spartans, who are now 6-3-1, will open University Athletic Association play on Saturday, Oct. 5 on the road against nationally fourth-ranked Brandeis University.

The Spartans will be hard pressed to advance in the highly competitive UAA, with three conference opponents in the top 25 teams in the country. For Bianco, weekly continuity will define their success in the pursuit for a conference championship.

“We need to improve our collective consistency from game to game. This boils down to our approach and preparation before the game as well as our mindset and attention to detail during the game.”