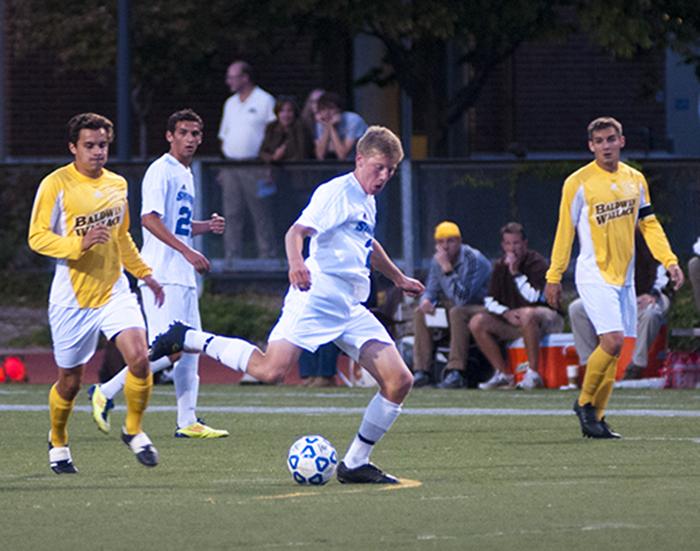 The win for the Violets held them steady at No. 6 in the National Soccer Coaches of America Association coaches’ poll. The Violets, who are undefeated this season at 9-0-0, have been remarkable in their first nine games, allowing just three goals, one of which came from the feet of the Spartans.

NYU, who is 37th in Division III in scoring with 2.78 goals per game, threatened to get on the board early when, in the seventh minute, center back Sam Kuehnle was able to redirect a loose ball that was on its way to the back of the Spartan net. The Violets managed to break through the Spartan backline a minute later; New York University forward Kyle Green chipped a ball over senior goalkeeper Ryan Koepka to give the visitors a 1-0 lead.

The Spartans, who were facing the No. 4 scoring defense in the country, managed to get their revenge 20 minutes later in the 34th minute, when freshman midfielder Chris Cvecko won a 50-50 ball in the box and turned it into the net to equalize the score at 1-1. The goal was Cvecko’s second of the season.

NYU’s offense kept churning, however. Just before halftime, the Violets won a penalty in the box. Senior captain Niki Chow slotted it past Koepka for the 2-1 advantage.

The Spartans continued to press, but were unable to put shots on goal, forcing the Violets’ goalkeeper Jonas Poster to make just one save during the match.

The Violets added an insurance goal to prevent the home side from stealing a point when Green connected on a header off a long pass by the Violets’ Ryan Horch in the 78th minute. That goal gives Green eight in seven games, ranking him 11th in the nation in goals per game.

In goal, Ryan Koepka tallied three saves to go with the three allowed goals. He falls to 2-4-0 on the year.

The Spartans will look to even their conference record at Brandeis University this weekend as they begin a four-game road trip. Case will take on the Judges tomorrow, Oct. 6 at 1:30 p.m. The Spartans will travel to Emory University and Carnegie Mellon University next week on Oct. 12 and 14, respectively.