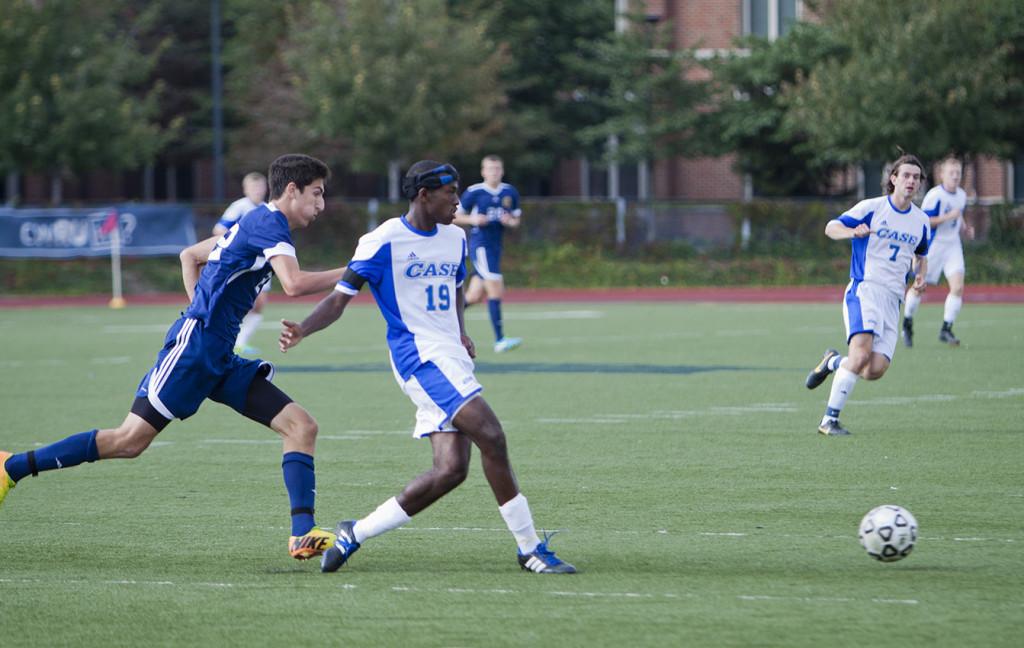 The men’s soccer team’s belief in their approach led them to an undefeated record up through this season when starting their first home stand this past week. First year head coach Brandon Bianco’s new approach for a team that struggled last year has had a powerful impact as the Spartans beat both Franklin University 4-3 in their home opener and John Carroll University 2-1 Wednesday night.

The team prepares with this approach in mind and it has led to big results. “Each game is a big one,” Bianco said, “If we prepare well, like we have been, we’ll put ourselves in a good position to be successful.”

They have been very successful with a 4-0-3 record. In their home opener on Saturday the Spartans wasted no time when freshman Jacob Grindel tapped in a cross from midfielder Chris Cvecko for the first goal of the game at the 1:53 mark. Franklin equalized in the 17th minute but the Spartans took back the lead off Cvecko’s second assist of the game, aiding on senior Marco Patrie’s goal in the 28th minute. Sophomore Matt Zembas added to the Spartans lead at the 36:41 mark when he capitalized on a defensive mistake by Franklin and beat the Grizzlies goalie, finding the back of the net.

The 3-1 lead at the half epitomized the Spartans approach to dominating with their style of play. This is especially evident when players step up their level of play. “We’ve seen some nice growth from all of our freshmen,” Bianco said “Even those who aren’t playing a lot of minutes are training really well and are getting better. Alex Masciopinto is a guy who has really grown into his role coming off the bench and stabilizing the middle of the field. Matt Zembas played his best game yet at Case against Franklin and to see him break through on the score sheet was great and well deserved.”

The second half of the game was a little rougher for the Spartans after going up 4-1 on Grindel’s second goal of the game off Cvecko’s third assist to put Case up 4-1 in the 54th minute. The team over-relaxed as the Grizzlies stormed back scoring two goals in six minutes but the Spartans held on for the win.

“We need to have a better attention to detail and a more mature approach to manage a game properly.” Bianco said about the two quick goals by Franklin, “Unfortunately that type of situation you cannot replicate in training, so in many ways it was good that we were in the situation we were in so we can grow from it and get better.”

The dominant style of play approach for Case Western rolled into the game Wednesday night versus John Carroll University. The Spartans exploded in the 27th minute when Grindel scored off a free kick to put Spartans up one to nothing. The Spartans were not done dominating, however, when forward Matt Zembas scored a mere 56 seconds later off an assist by Zachary Broujos.

The game got extremely physical as the officials allowed the game to progress despite shoving and fouls on both sides. Tensions came to a peak in the 58th minute when forward Logan Glosser was knocked to the ground by a John Carroll defender and the referees failed to make a call. The two teams began arguing and Glosser was given a yellow card for foul language.

Case stepped up with many critical clears and saves including a save by Lewis at the 89th minute mark. “I was really happy with the way our guys battled and when you play a team that is probably going to win their league it is going to be a tough game,” Bianco said, “It was a good result for us.”

Both the defense and offense played strong games leading to the win. “For us to hang on and grind out a win was a big maturation for this group,” Bianco said, “When a team pushes like John Carroll does they are going to have to make plays. It was good for them to be under that kind of pressure in a game like this.”

The Spartans look to remain undefeated when they play Wilmington University on Saturday night.