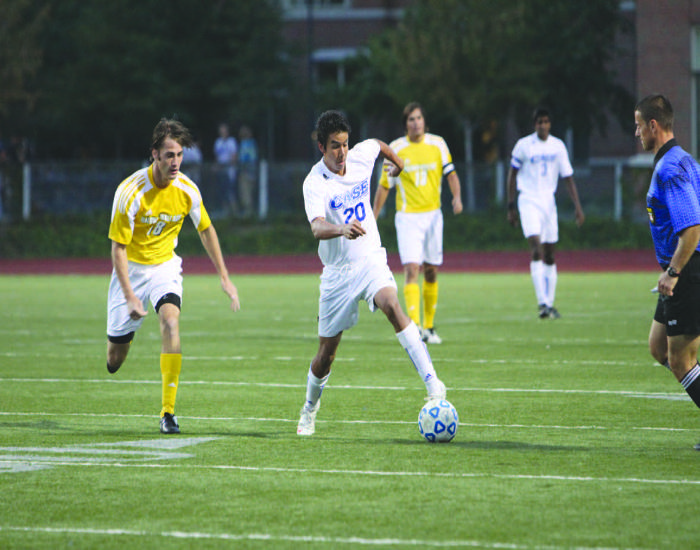 When the Case Western Reserve University men’s soccer team returns to the pitch this fall, they’ll do it for the first time as defending University Athletic Association champions. The goal is always to win the conference championship, and the Spartans will have their work cut out for them as they play in one of the toughest conferences in the country.

Picking up the lion’s share of the offense will be sophomore striker Patrick O’Day, who debuted with one of the best rookie seasons in program history. O’Day was neck and neck with Bell in terms of scoring for the first half of the season, scoring a blistering eight goals in the first six games of the season. O’Day also had nine assists and started and appeared in every game but one on his way to earning Co-UAA Rookie of the Year honors.

Joining O’Day up top on the wing is senior Eric Erb, who was the team’s third leading scorer last season. Erb had nine goals last season to go along with three assists. In addition to Erb, another likely to get extended playing time will be senior Renee Silva who appeared in 16 games last season, starting in five. Silva notched a pair of goals and assists last season playing on the right wing.

The midfield will return entirely intact as the core is built around seniors Kostis Theoharides, Ross Twanmoh, and Marco Patrie. Theoharides and Twanmoh started all 20 games last season. Theoharides scored two goals and four assists while Twanmoh tallied a pair of goals and five assists. Patrie appeared in 19 games, starting nine; he had one goal and two assists. Likely joining them in the starting lineup will be junior Dominic Carusone who played in every game last season starting once. Carusone didn’t score in 2011 but played a part in the offensive attack with three assists.

The defense will see the biggest makeover as Wimalasena and All-Region defender Kyle Alsup graduated. Returning on the backline will be senior Sam Kuehnle and sophomore Taylor Fletcher. The pair started every game last season and was part of the reason for Case’s staunch defense that allowed less than one goal per game last season.

Taking over in goal will be senior Ryan Koepka, who appeared in seven games last year, tallying over 200 minutes played on his way to a goals-against-average of 0.86. Koepka allowed two goals and made nine saves. While Koepka hasn’t faced top 25 quality opponents, he played over 10 percent of the team’s minutes and had a save percentage of .818, higher than Yabrow’s .766.

The Spartans, who finished last season 15-5-0 overall in 5-2 within the UAA, will need to kindle the remains of last year’s offensive dynamo and hope that it will carry over to the 2012 season. The Spartan’s 52 goals last season were a program record that came a 2.60 goals-per-game clip; this offensive proficiency was the key factor to the men winning their first ever UAA Championship. The boost in scoring last season was so substantial that it nearly doubled the previous two year’s scoring rates of 1.05 gpg in 2009 and 1.63 gpg in 2010.

Even if the team’s scoring can’t keep pace with the loss of Bell, O’Day and Erb showed that they can make moves and be offensive playmakers with the ball. A key constant for the Spartans over the past three years has been their solid defense. The men gave up exactly 1.00 goals per game last year, a figure that was slightly better than the previous two years when they allowed 1.11 and 1.21 gpg in 2009 and 2010, respectively.

If history is any indicator, the path to defending the UAA Championship and qualifying for back-to-back NCAA Championships will rest on the offense’s ability to beat the opposing goalkeepers. Four of the team’s five losses last season came when they scored one or fewer goals. In fact, the Spartans allowed three or more goals just twice, once in a 3-2 loss at Baldwin-Wallace College and in a show of offensive prowess in a 6-5 double-overtime nail biter against UAA foe Emory University.

The men, who finished just outside the top 25 at the end of the 2011 season, will have their eyes on a few games on the upcoming schedule. The match that is always the highlight for the Spartans is their annual matchup on Wednesday, Oct. 25 at No. 1 Ohio Wesleyan University. The Battling Bishops won the NCAA Championship last season and finished 23-2-0, including a 2-1 over the Spartans at Case Field.

Other big non-conference home games for the Spartans will come on Tuesday, Sept. 11 versus Baldwin-Wallace. The Yellowjackets were able to find holes in the Case defense last season when they won 3-2. Case will also host Hiram College in a notoriously tricky game that is tucked in the middle of the conference matchups. The Spartans knocked off the Terriers last season 2-1.

The biggest conference matchup for the Spartans will be at home on Sunday, Oct. 28 when they host No. 23 Washington University. The Bears finished 15-4-1 overall last season and were tied with the Spartans atop the UAA table at 5-2-0; however the Spartans won last year’s matchup in St. Louis, Mo. 2-1 and claimed the title via a tie breaker. The Bears also made the playoffs last season, but, like the Spartans, exited in the second round when they lost to the eventual champions Ohio Wesleyan 1-0.

This season will certainly be a trying one for the Spartans as they look to fill a number of seemingly irreplaceable parts. A second UAA Championship may be just out of reach for Palmer and the Spartans in the notoriously difficult conference; however, if the head coach can find the muse that inspired the offensive juggernaut from last season, it’ll be hard to stop this men’s squad.

The Case men will open the season at home on Friday, Aug. 31 at 7 p.m. against Washington & Jefferson.