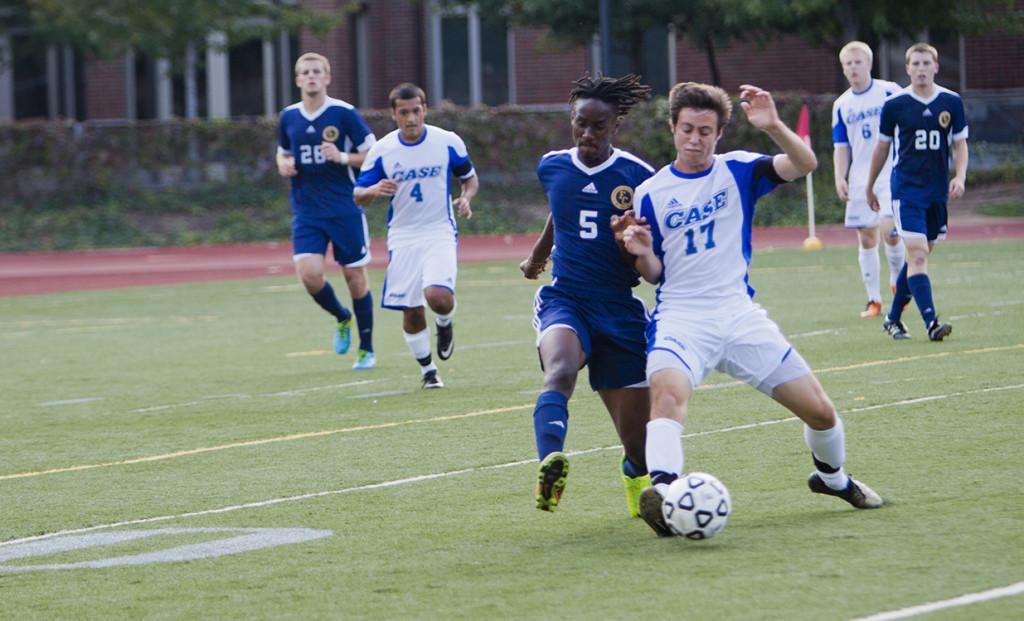 The first loss of the season on Saturday for the Spartan men’s soccer team was only a bump in the road as they bounced back in a strong game on Tuesday night with a 4-0 win over Hiram College.

The team suffered their first loss of the season, losing 2-1 last Saturday, Sept. 28, against Wilmington College. The Quakers went ahead in the 22nd minute when Daniel Wicks beat Spartan keeper Ari Lewis. Just five minutes later, Chris Cvecko sent the equalizer into the back of the net, scoring his third goal of the season.

However, the tie wouldn’t last— Wilmington overcame the Spartan defense 10 minutes into the second half and Wicks found the back of the net a second time. Case Western refused to go down quietly as they continued to push back, forcing the Quaker goal to make strong saves with just a few minutes left to play.

The first loss for the Spartans was still a strong showing. The team continued to demonstrate the aggressive play that has been successful all season, but it wasn’t enough for a victory in this competitive game. Head coach Brandon Bianco actually places the blame on himself for the loss.

“Playing the way we did was a direct result of me not having the guys ready,” Bianco said. “We weren’t ready for Wilmington’s direct play.”

The Spartans would learn from their mistakes as they prepared for the Tuesday night game against Hiram College. The team refocused on their approach and upped their work and level of play. The dedication paid off as they beat Hiram 4-0 on Tuesday night. “We want to be a balanced program by playing good soccer and working our tails off. We got back to that Tuesday night,” Bianco said.

The Spartans controlled the entire game with consistent play, scoring two goals in each half to handily beat the Terriers. The Spartans capitalized early when Cvecko put the ball between the posts unassisted at the 7:01 mark. In the 32nd minute, Alex Masciopinto gave Cvecko a hand, assisting on Cvecko’s second goal of the game which put the Spartans up 2-0 for the half. Hiram kept up a strong defensive presence in the half, limiting the Spartan’s shots.

Case took control in the second half when Dean Balabanov scored his first goal of the season off an assist by Ryan Finstad in the 59th minute. Matt Zembas added the capping goal for the Spartans in the 86th minute to put the game well out of reach. The cycle of scorers for the Spartans simply highlighted the team effort put forward in each game. “Having different scorers makes you a dangerous team, so I’m happy we’re scoring by committee,” Bianco said.

The defense stepped up from the previous game against Wilmington. Frank Candau played goal for the Spartans against Hiram and led the defense. Candau stepped in for Lewis, the typical starter, but Candau didn’t miss a beat working a shutout. This was Candau’s first start and first win of the season. “We’re blessed to have great depth at the goalkeeper position and (Tuesday) night we wanted to give Frank a look,” Bianco said. “Frank has been training well and has earned time. I was incredibly proud of how Ari, and our other goalkeepers, support one another and are great teammates.”

Case Western will hope to continue with their strong play this season when they open their UAA season on Saturday, Oct. 5 against Brandeis at Case Field.