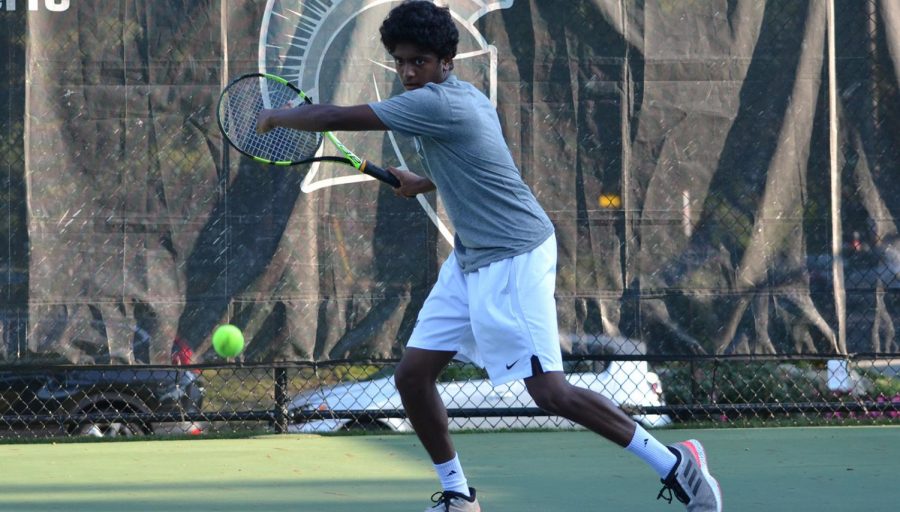 The Case Western Reserve University men’s tennis team faced two opponents last Saturday, resulting in a pair of wins for the Spartans. The team, currently ranked 14th in Division III, bested the No. 33 University of Rochester and No. 36 Hobart College. The wins increased the Spartans winning streak to four.

The day began with the match against Rochester. CWRU started out strong, claiming the first point of the match when first-year teammates Aaron Umen and Chaitanya Aduru bested their opponents 8-2 at third doubles. The duo composed of third-year student Zach Hennessey and second-year teammate Matthew Chen scored the second Spartan point with their 8-5 win in second doubles. To round out doubles play, third-year Spartan Anthony Kanam and second-year student Jonathan Powell defeated their Yellowjacket opponents 8-5. The three victories gave CWRU an early 3-0 lead heading into singles play.

The team’s energy did not decrease in singles play, as the team claimed victory after victory. Third-year Spartan Sam Concannon started the sequence of victories with his win at fourth singles. Umen followed with a win at third singles, and Chen conquered at first singles. At second singles, Kanam fell behind at the start, but he came back to win the match and add another win for the Spartans. Aduru and Powell both defeated their opponents, giving CWRU wins at fifth and sixth singles and rounding out the sweep for the Spartans. The 9-0 victory is the seventh complete sweep for the men’s tennis team this spring.

The day continued with the match against Hobart. The Spartans carried their momentum through to the second match of the day, sweeping the doubles play. Again, Umen and Aduru picked up the first point for the team, winning third doubles 8-3. Second doubles followed, with Hennessey and Chen claiming an 8-3 victory. At first doubles, Kanam and Powell faced the eighth-ranked pair in Division III. They pulled out the win, bringing CWRU to 3-0 as singles play began.

The play began with two more victories for the Spartans, extending the lead to 5-0. Concannon had the first win at fourth singles, and Umen followed at second singles. Hobart was able to take some matches from CWRU, winning the following two singles matches. Despite the losses at first singles and third singles, the Spartans responded with wins in the final two matches of the day. Aduru claimed fifth singles and first-year Spartan Max Vicario bested at sixth singles. The wins brought the Spartans to a 7-2 victory.

The wins bring the CWRU men to 14-5 on the season. The team features multiple high-ranked players, with Chen ranking 11th in the region and Kanam ranking 16th. Additionally, the Spartan duo of Kanam and Powell ranks fourth in the region, and the pairing of Chen and Hennessey ranks 13th.

The men will return to action next weekend when they face Division I Cleveland State University on Saturday, April 6. The following day, the team will host No. 27 Kalamazoo College at 10 a.m.