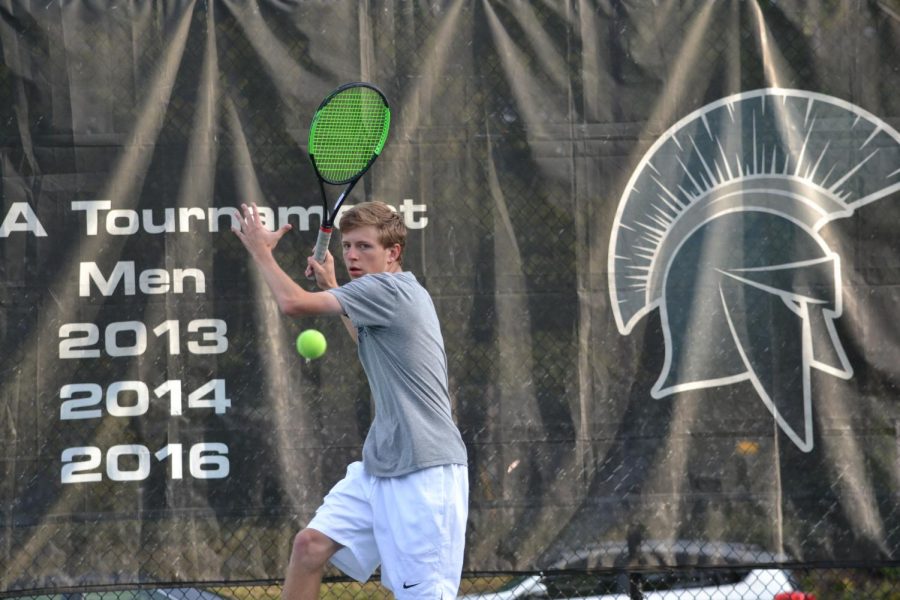 Sam Concannon maintains focus during a match. The men's tennis team won all four of their matches last week.

The Case Western Reserve University men’s tennis team had a busy week, taking on Walsh University last Thursday, Hope College and the College of Wooster on Saturday and Oberlin College on Sunday. The packed schedule did not hinder the Spartans, and they finished the week with four wins.

The match against Walsh started strong for the Spartans with a sweep of the doubles matches. The momentum continued to singles play, where the team won five of the six matches, securing an 8-1 win.

On Saturday, the Spartans started with the match against Hope College. Singles play, rather than doubles, came first. CWRU took all six matches, gaining an early 6-0 lead, enough to secure the match. All six singles matches were decided in straight sets. Three wins in doubles play followed, securing the overall sweep for the Spartans.

In the following match against the College of Wooster, the Spartans again took an early lead, winning two of the three doubles matches. With just one loss in singles play, the Spartans claimed the match, 7-2.

The Spartans kicked off Sunday by recognizing fourth-year Spartan Rob Stroup, the lone senior on the team. In his four years on the team, Stroup has won 15 or more singles matches each year. Currently, he has the fourth-most singles victories in program history with a career record of 66-48.

Stroup performed well on his Senior Night, winning at third doubles with his partner third-year student Anthony Kanam. Second-year teammates Matthew Chen and Jonathan Powell defeated their first doubles opponents and first-year Spartans Aaron Umen and Chaitanya Aduru claimed second doubles, to sweep the competition. For singles play, the Spartans were victorious in five of the matches, falling only at first singles. The match ended in an 8-1 win for the Spartans.

The weekend brought the Spartans to an overall record of 19-8 on the season, with a 7-7 record against nationally-ranked Division III teams.

The Case Western Reserve University women’s tennis team did not compete over the weekend, but are preparing for the 2019 University Athletic Association Championships. Both the men and women will be traveling to Florida to compete with the goal of bringing home a title. The men enter the competition seeded fifth and the women are seeded seventh. The championships will start on April 25 and will run through April 27.