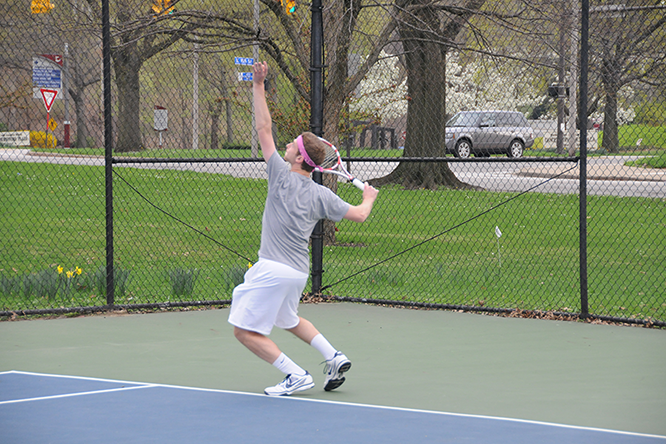 Junior Derek Reinbold topped Walsh’s Nigel Nabuurs 6–2 on Saturday in Case’s 7–1 win. Reinbold improved to 19–9 on the season and is on a five-match win streak.

Behind two wins each from freshman Christopher Krimbill and junior Eric Klawitter, the No. 13 nationally-ranked Case Western Reserve University men’s tennis team cruised to a 7-1 victory versus Walsh University during the final match of its regular season schedule on Saturday inside the Cleveland Skating Club.

The match, moved indoors due to cold weather, also served as the program’s Seniors’ Day and was designated as a “Rally for the Cure” event with all proceeds going to benefit Susan G. Komen for the Cure.

Ranked second in the latest Intercollegiate Tennis Association Central Region poll, Case concludes its regular season slate with four-straight wins and a 19-5 overall record. With the loss, Walsh falls to 6-16.

Opening with doubles action, the Cavaliers grabbed their lone point of the match at No. 1 in a thrilling match as Pablo Cabezon and Carlos Jaque edged seniors Nicolas Howe and Kyle Gerber by a 9-8 score.

However, the No. 2 tandem of seniors Alex Solove and Richard Brunsting bested Chase Pucci and Joshua Gamboa by an 8-1 tally, while the No. 3 due of Krimbill and Klawitter blanked Nigel Nabuurs and Grant Bilinovich, 8-0, to give the Spartans a 2-1 edge.

During singles play, the hosts were victorious in all five singles matches that were finished. Krimbill, the region’s No. 11 player, defeated Cabezon via a 6-2, 6-2 tally, while sophomore Will Drougas won at No. 2 by 6-1, 6-1 scores versus Jaque.

In the third slot, Gerber won 6-1, 6-1 versus Pucci, while Klawitter defeated Gamboa by a final count of 6-1, 6-2 at No. 4. Junior Derek Reinbold claimed the team’s seventh point at No. 5 with a 6-2 win. The final match went unfinished.

With the regular season complete, the Spartans will now set their sights on the University Athletic Association Championship, which runs this Friday to Sunday, April 26-28, in Altamonte Springs, FL.