When will the tweeting stop? 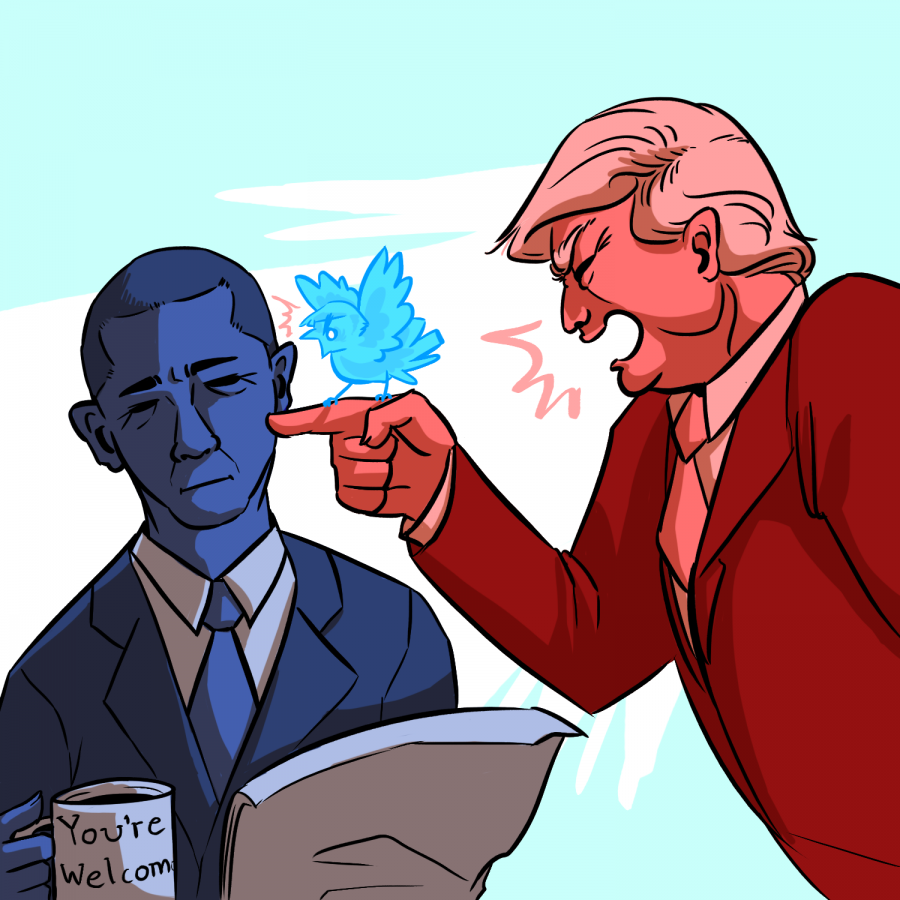 In the early hours of March 4, President Donald J. Trump shocked the nation with claims that the Obama administration had ordered the wiretapping of Trump Tower during the 2016 presidential campaign, via his customary Twitter storm. These allegations could easily be mistaken for the typical bluster of President Trump, but to consider them as such sets a dangerous precedent. Blatant accusations of this caliber, especially against a former president, could inflict serious damage ranging from the slander of Barack Obama to the degradation of Washington protocol regarding sensitive intelligence. These accusations must be dealt with swiftly and accurately, and if they are proven to be false, President Trump must be held accountable.

The reaction to the President’s tweetstorm was practically immediate. Numerous current and former government officials immediately claimed that the allegations were nonsensical, including former national security aide Ben Rhodes.

Rhodes tweeted, “No President can order a wiretap. Those restrictions were put in place to protect citizens from people like you.”

The law seems to agree with him; after the Nixon administration’s Watergate scandal in 1973, Congress swiftly enacted a set of laws specifically preventing mass surveillance of this kind. For wiretapping in particular, the FBI must request a warrant from the Foreign Intelligence Surveillance Court, which was established by an act of a similar name in 1978. It is crucial to note that the sitting president cannot order the FBI to request one of these warrants. The agency must already be performing an investigation, and it must have reasonable suspicion of wrongdoing in order to even apply for such a warrant.

Earlier this week, FBI Director James Comey further discredited President Trump’s accusations, stating in a testimony before the House Intelligence Committee that the agency had no evidence of any wiretapping. The notion that Obama could have personally requested the surveillance of Trump Tower is at best ludicrous and at worst criminal.

These allegations seem to come directly from the extreme right fringes of the Republican Party. Several top Trump aides were reportedly shocked that morning, as few had any inkling of the what the president was talking about. There is speculation that President Trump was referring to an article published on Breitbart on March 3, which used the surveillance of former National Security Adviser Michael Flynn’s meetings with the Russian ambassador as evidence of an administration-wide wire-tapping effort.

However, national officials have stated that it is customary to maintain surveillance on foreign officials, and that conversations with them are regularly recorded as a matter of protocol. Furthermore, transcripts of these conversations typically classify the American counterpart for privacy purposes, although these restrictions can be released during investigations, as happened to Flynn last month.

Furthermore, there has been no confirmed evidence that the FBI had tapped Trump Tower as of yet, the former administration’s role notwithstanding. The fact that the administration has not yet produced any evidence for these allegations is telling in and of itself.

Due to the bombastic nature of the Trump presidency, it seems to be increasingly common to set outbursts such as this aside in order to prepare for the next shocking development. However, this situation cannot be brushed aside so lightly. Allegations of criminal activity from a sitting president should be taken seriously. In fact, they always have been, which is why Watergate was such an enormous scandal. That is why it’s so worrying that unsubstantiated claims are becoming normalized in the political system. We must be carefully aware of the enormity of the situation; the sitting president of the United States has lent his weight to what amounts to nothing more than a conspiracy theory. He has provided no evidence, and has instead elected to wrongfully accuse a former president of the United States of serious crimes.

The President wants the American people to forget all about the Russian connections. He wants everyone to instead be distracted by the latest shiny Twitter rampage. These accusations are meaningless and baseless, but it is very possible that they were not meant to be anything more than the topic of today’s media frenzy. However, unlike his previous bombast, these allegations are much more serious. As Americans, we must hold President Trump accountable. He cannot get away with childish and unpresidential behavior like this anymore.

Danny Miles is a third-year student who flatly denies allegations that he has constant surveillance in his suite.