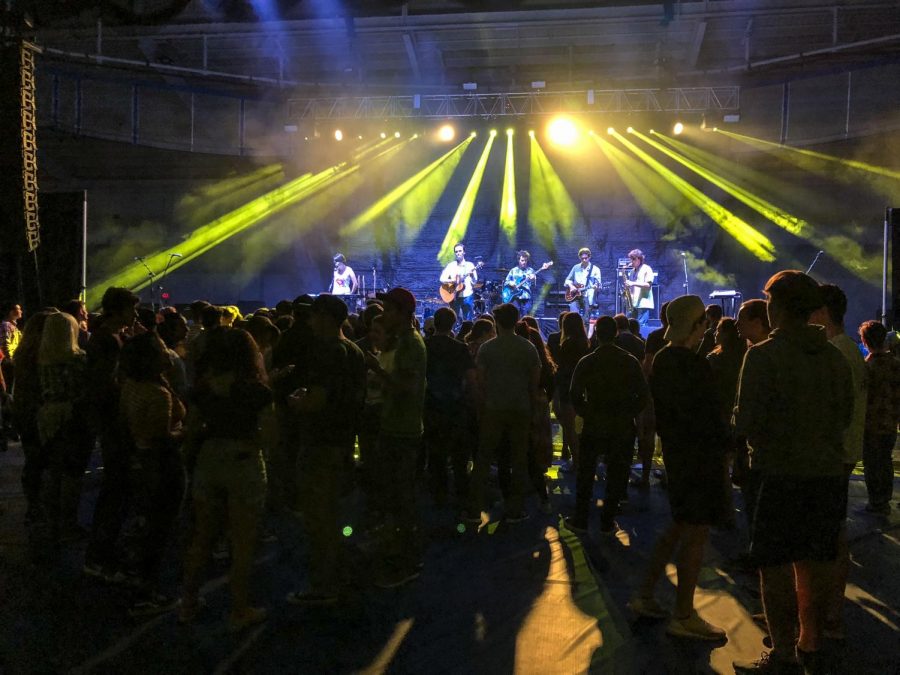 As the lights in the Veale Convocation, Recreation and Athletic Center faded out on Saturday, Sept. 29 in anticipation of Misterwives, it became impossible to see over the heads in the crowd. Smoke drifted out from behind a UPBeats sign on stage and gave way to Misterwives as they took in the cheers from the crowd.

The band, attuned to the energy from the crowd, performed a variety of their most popular songs from “Coloring Outside the Lines” to “Reflections” and “Our Own House.”

Addressing the crowd, Misterwives noted their favorite part of performing in small venues such as Veale is the intimacy, because it brings people together.

“I loved that the music encouraged more dancing, and I would like to see a similar theme in fall concerts to come but maybe pulling from other genres of music that they haven’t had here before,” Greene said.

R.I.P. Reuben, who opened a UPBeats concert for the first time after playing Springfest for the past two years, had the opportunity to meet Misterwives and Smallpools and benefited from the connection.

“It was really great to meet them all,” R.I.P. Reuben guitarist and third-year student Michael Tucci said. “Misterwives even asked us to connect with them for tips on how to improve.”

“Pachelbel’s Canon” blasted from the speakers as Smallpools began their performance. After a charged instrumental introduction, the band thanked the crowd for the opportunity to perform that evening. The group opened for Misterwives a year ago and this performance served as a reunion for them.

As Smallpools drew the crowd in for their performance, they broke out a killer whale inflatable for their song “Killer Whales.” Popular with the crowd, the inflatable continued to make its way around the field house as students sang and danced throughout the duration of the song “Dreaming.”

Misterwives also engaged with the crowd. One of the guitarists from Misterwives took a finger hand from a student in the crowd, then proceeded to play the guitar after wearing it on his finger.

Misterwives closed the performance with a drumming session between three of the band members. This drew great energy from the crowd and left students in a great mood before the band thanked the crowd and said their goodbyes. Smiles could be seen on people’s faces all over the gymnasium as groups of students broke down to dance to a track by Drake that played as the venue emptied out.