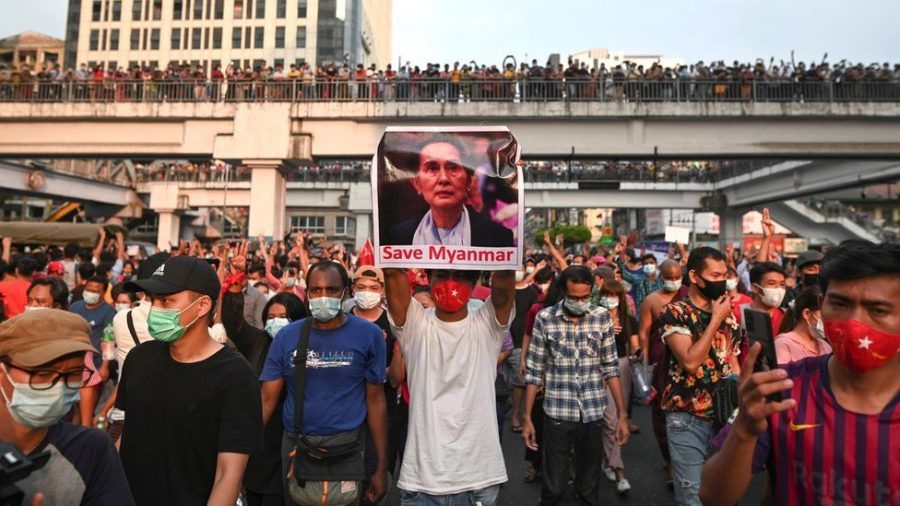 Thousands of people take the streets of Myanmar to protest the military coup, despite attempts to silence them.

Feb. 1, 2021. It was on this day that the military of Myanmar, the Tatmadaw, instigated a sudden and swift military coup d’état by deposing and replacing numerous ministers and taking control of the country’s main governmental institutions and infrastructure, including the media.

Their alleged pretext for this coup, similar to that of former U.S. President Donald Trump, was that the election—which saw a landslide victory by the National League for Democracy (NLD) at the expense of the military-backed Union Solidarity and Development Party (USDP)—was marred with fraud. Yet, it is readily apparent the coup was a last-ditch power play by the Tatmadaw to reclaim its military dictatorship. This is further supported by the fact that the coup took place after the Tatmadaw made numerous attempts to have the electoral commission invalidate the results.

It laid bare that the Tatmadaw and its USDP are so incompetent at serving the will of the people that they have had to resort to cowardly tactics reminiscent of the Gestapo.

All of this is, without a doubt, a backward step to the dark days of an authoritarian stratocracy which plagued the country prior to 2010 by limiting certain inalienable freedoms like that of the press and speech.

Since 2010, the U.S. has supported the country’s democratization and development through the U.S. Agency for International Development, which has assisted Myanmar in reforming its judiciary and other governmental institutions.

Since the coup, President Biden has ordered new sanctions and closed off $1 billion in funds that would otherwise benefit the perpetrators of this travesty of justice.

Yet, these sanctions are not enough to rein in the military brass and help spread and cement democracy. More aggressive action is needed.

Biden needs to address the Tatmadaw generals and take on the behemoth of conglomerates that enrichen and back many of the generals and their wealth. For instance, the two biggest ones, Myanmar Economic Holdings Limited and the Myanmar Economic Corporation, are entrenched in most—if not all—industries, from services like banking and transportation to the lucrative commodities markets of jade and beer.

Both conglomerates have numerous partnerships with several Asian countries, most notably, Singapore. Therefore, Biden must first work with Singapore, in addition to other countries, to cut off all trade dealings and foreign investment to these conglomerates.

It is time to show that this nonsense will not be tolerated by the international community. If such goals are not achieved, I am worried that the military’s grip on the government would prevent the Rohingya refugee misery from ending. After all, this military regime is directly responsible for the Rohingya genocide that has killed close to 25,000 and displaced more than 900,000.

Furthermore, the people of Myanmar have spoken! People across the country are interrupting work to protest, taking to the streets to voice their dissidence. The military is attempting to stifle the protest by cutting off internet service and using military personnel to intimidate protesters. Their non-judicious response to the protests is further proving just how unqualified such a regime is and why there is a need for the U.S. to move away from America First Policy.

It is time to show that the U.S. is still an omnipresent force in world affairs and demonstrate its propensity for altruism. Beginning with Myanmar as the catalyst, it is time to gain back the world’s trust.