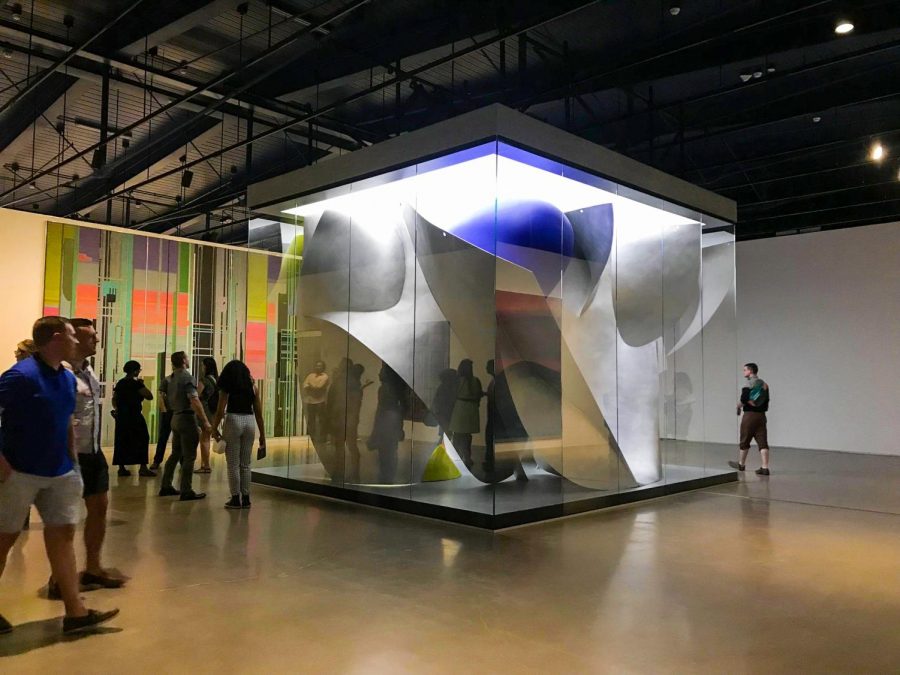 Both works explored what it means to be in a place, but in wildly different ways, that made for a great contrast. Wei’s work uses a mix of household objects and construction materials to make us rethink both the furniture and architecture around us. Kim takes the opposite approach, instead of a grand narrative like Wei, his work focuses on the small personal story of his own life.

For 18 years, Kim has painted the morning sky every Sunday and included a small diary entry. He now has over 1,000 paintings. Kim plans to continue the series until he can’t paint anymore.   The longevity and quality of the work is a testament to a disciplined ritual approach to art that offers an alternative to the romantic idea of art as sudden inspiration.

Curator Courtenay Finn faced a difficult task when choosing which paintings to display at MOCA. She had pictures of half the paintings, but only had access to the text of the other half. Finn decided on choosing paintings from every year since MOCA opened in 2012, and hanging them up in chronological order.

Forty-nine of his paintings are on display at MOCA, starting with the painting from the day before MOCA opened its current location in Uptown to the public.

“Feeling kind of shitty today,” reads the first line of the day’s entry.

The diary entries are what make “The Sunday Paintings” effective. He is writing about everyday problems, the anxiety of his daughter going to college, being lonely when traveling without his wife and trying to limit his phone use. Kim is street-level philosophy at its finest, no knowledge of metaphysics required.

Kim himself found many of the selected works to be quite melancholy.

“When I got here, the room was empty, and the paintings were up,” said Kim. “I was the only person in the room, so I decided to read them and it was really depressing.”

“I don’t find it depressing,” responded Finn. “I find it really hopeful and very real. They feel like a life lived.”

What adds levity to the exhibit is how many of his entries are touching, honest portrayals of his daily thoughts and activities. You get an idea of what matters most to Kim, his family, based on how often his paintings talk about them.

“Today after 30 years together,” reads one painting dated Aug. 26, 2016, “Lisa and I are going to shop for rings and then take a long meandering walk through Brooklyn, [New York].”

Kim’s paintings are all done on a 14×14 canvas, the largest size that can fit in a carry-on bag.  Kim avoids painting at dawn or dusk since he wants to focus on the pure blue sky with puffs of white clouds, instead of the goldens and reds that occur when the sun is near the horizon.

“I related so much to him,” said fourth-year student Brian Pang. “He was so down-to-earth and he made me realize that it takes repetition and critique to create better works of art.” 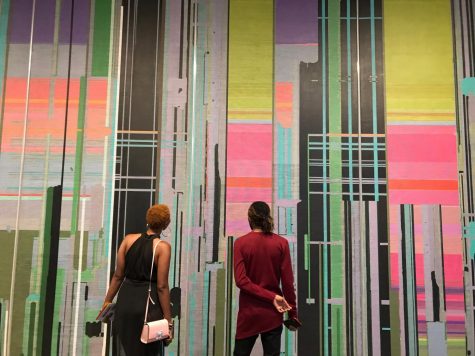 Wei’s “Invisible Cities” excelled in contrasting forms, mixing sculptures with paintings to create the feeling of buildings over the sky. One work, “Microcosm,” with its plates of spiraling steel curling around several colored blobs, is reminiscent of the architecture of the Peter B. Lewis Building.

Wei will come to Cleveland on Oct. 11 to discuss “Invisible Cities.” Though it would have made sense for them to speak about their art on the same day, it felt fitting to have each talk about their art separately, because their artistic visions are so different in scope. Where Wei asks us to reconsider the skyscrapers and the mountains of stuff we surround ourselves with, Kim asks us to think about the sky above our heads and the people by our side.

“These are the works I can rely on,” said Kim. “I can do them in the way I hope to do everything, just for the love of doing it.”