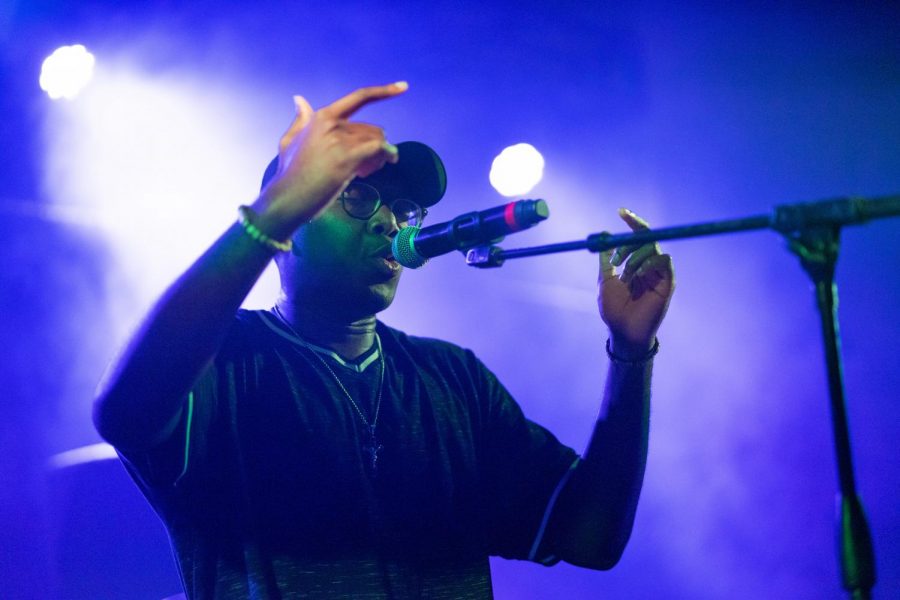 University Program Board (UPB)’s announcement last week that Desiigner would perform at the Tinkham Veale University Center on Saturday, Aug. 31 surprised most. However, more surprising was the artist’s performance.

The Brooklyn-born rapper, most known for his 2015 song “Panda” and 2016 song “Tiimmy Turner,” energized the crowd, occasionally splashing water onto squealing front row spectators and encouraging the mosh pits. At one point, Desiigner even invited members of the audience onstage with him, carrying a female student on his shoulders.

Toyin and A.N.I with guests Ezio and 4upz opened for Desiigner. Some may recognize A.N.I and 4upz from previous appearances at Battle of the Bands and Springfest, two concerts also hosted by UPB. Third-year student Allan Willmon also joined the stage, hyping the crowd and rapping along.

Like most artists at concerts, Desiigner came on later than the promised, 10 p.m., and many students were visibly frustrated. When approached in the middle of the concert, student Thomas Rhodes said, “I was promised a Desiigner concert and it’s been 25 minutes, and it hasn’t even happened yet.”

Desiigner’s performance was highly anticipated, drawing an enormous crowd. This ultimately led to many people tripping and falling, especially because of the excessive mosh pits. Security interrupted the concert at one point because of the out of control crowd.

With the prime view from the third row came the consequences of perpetual pushing, and I lost my balance multiple times and fell twice, almost getting swallowed by the masses. At one point, I was pinned down for minutes as the concert-goers on top of me scrambled to get up.

However, the unpleasant conditions did not deter most students from staying at the concert. Third-year student Bridget Croniger asserted that concerts like this one is “the best way for the [Case Western Reserve University] community to get together as one.”

Toward the middle of his set, Desiigner performed his hit songs “Panda” and “Tiimmy Turner” and immediately jumped into the mosh pit that had already formed. As some concert goers stood bewildered, trying to figure out where he went, about half the crowd, including myself, sought refuge outside the ballrooms, overwhelmed by the heat and satisfied with the two songs we came to hear.

This move was unconventional, as most artists usually save their hit songs for the end of the concert, but it proved to be a good move for fans and bandwagoners alike. For fans, they had a better experience because there were less people and for students who came out with the lure of the free concert featuring a vaguely familiar artist, they could leave the humid ballrooms early.

The Saturday concert comes almost two months after a weeklong venture in Europe where Desiigner performed at the Balaton Sound festival in Hungry, EXIT Festival in Serbia and a third show in Poland.

Although Desiigner has not publicly announced any shows coming up, UPB has many events planned, including weekly Thwing Tuesdays from 12-1 p.m. and the reveal of the location for the Fall Break trip on Sept. 6, with tickets going on sale on Sept. 13.