Mural to be painted over in A.W. Smith 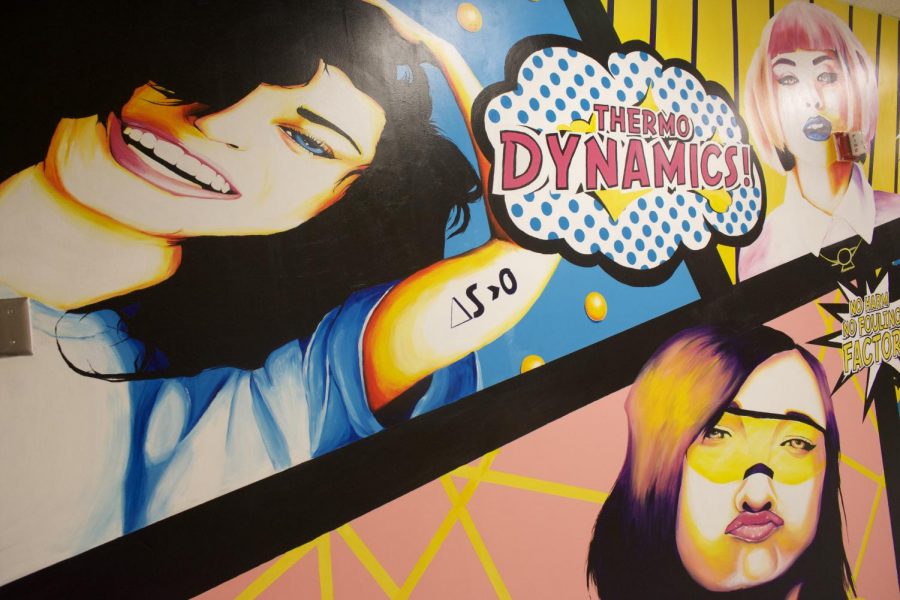 A mural in A.W. Smith depicting women in chemical engineering received backlash for its portrayal of women. Faculty members and organizations decided to turn the mural into a rotating piece, which will be painted over about every two years.

A controversial mural painted on a wall in the first floor of A.W. Smith Building is to be painted over. The artist behind the mural was local Cleveland artist Rachel Latina.

In October 2016, Chemical and Biomolecular Engineering Department Chairman Daniel J. Lacks asked Latina to create the piece, which commemorates women in engineering, because he admired the artist’s work.

“I saw the artist’s show in Cleveland, loved her work, and thought it would be a fun way to showcase the fact that we have great successes by women in our department,” Lacks said.

The mural was completed by the end of 2016, but just over one year later, in December 2017, the university received complaints about the mural. Maddy Lyons, a fourth-year student studying chemical engineering, did not make these criticisms herself, but noticed the concerns of others related to how the artist depicted her female subjects.

There are six women depicted on the mural; one has an engineering equation written beneath her collar bone, while another has an equation written on her arm and is holding her hand near her hair. The third woman is wearing glasses with abbreviations for chemical engineering terms written across the lenses, and the fourth is wearing lab safety goggles.The fifth and sixth women have comic book bubbles near them, also featuring engineering references.

“To my knowledge “[the criticisms] raised [are] that the women painted on the mural do not depict women scientists, as they are highly sexualized and [beautified],” Lyons said. “No woman looks like that when they are in lab, and all of their outfits and hairdos are essentially safety hazards.”

Case Western Reserve University stated: “The mural was commissioned specifically to celebrate women in engineering and has drawn praise from many for both its aesthetic appeal and its message. Some have objected to the representation of women and discussed their issues with staff at the university’s Flora Stone Mather Center for Women.”

Lacks addressed the concerns regarding the women depicted in Latina’s painting immediately after he returned from break in December 2017. He collaborated with the Flora Stone Mather Center for Women Director Lisa Nielson to find a solution. According to Lacks, Latina’s mural will be painted over.

“After learning about these concerns at the close of 2017, the department chair explored potential options to address them,” the university said. “Ultimately, he embraced the concept of a rotating series of murals for that space—a new one roughly every two years—with selections overseen by a student committee and including the Mather Center’s director.”

The first rotating mural project in A.W. Smith will be painted over Latina’s piece soon. The project will be managed by a group of students in collaboration with the Flora Stone Center for Women.

“My oversight,” Lacks said, “was not getting more student involvement with the artist and design.”

Lacks hopes to rectify his oversight with this new collaborative process. He also thinks that the rotation of the mural will prove fruitful.

“The transitions would generate excitement and allow expression of new ideas,” he said.

Latina did not respond to a request for comment.