Musicians and other performers camp out at Harkness for M.U.S.I.C.’s 24-Hour Perform-A-Palooza 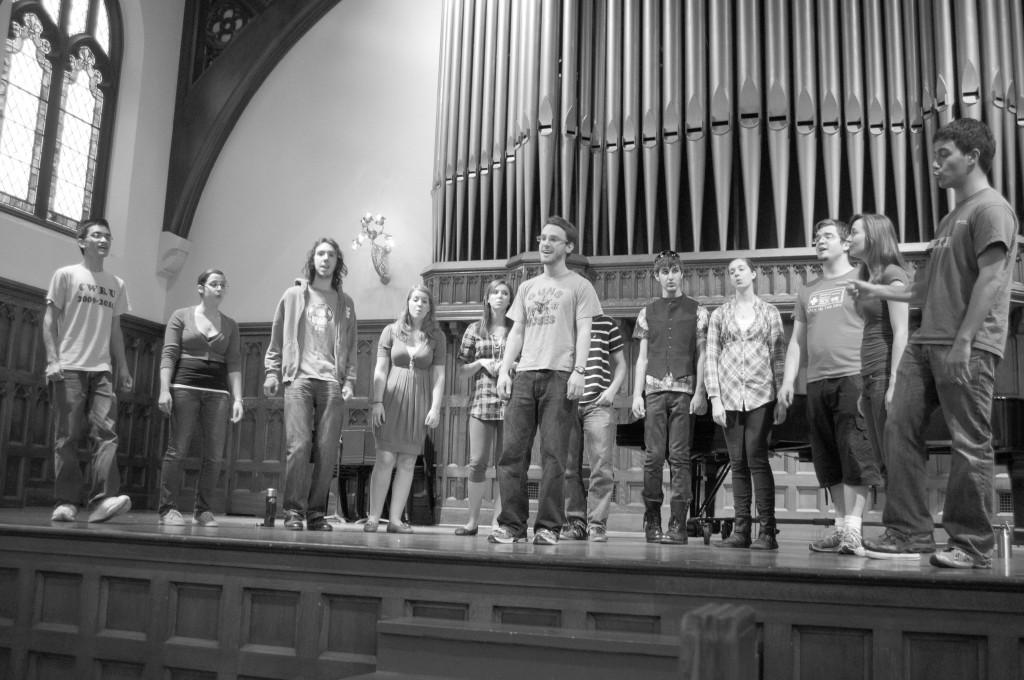 Every once in a while, an organization will take on the daunting task of hosting a 24-hour long event. There was a 24-hour raising awareness event somewhere a while ago, and 24-hour walkathons pop up on occasion. Everyone has heard of the fraternities that swear they’ll do a 24-hour party. Thankfully, nothing that catastrophic has happened for a good while. That simple idea, hosting something for a full day, attracts attention from all over. On that note, last weekend on the Case Western Reserve campus, the highlight of the 24 hour-marathons was the 24 hour Perform-A-Palooza.

The Perform-A-Palooza, currently in its fourth year, is one of the many events hosted by the Music Undergraduate Student Involvement Committee (M.U.S.I.C.). Previously the 24-Hour Recital, this year it became the 24 Hour Perform-A-Palooza to allow for a broader variety of performing arts to participate, and to dispel any notions that it was a formal or daunting event. “We decided that ‘recital’ might scare away people who have talent but are unsure about performing,” said M.U.S.I.C. webmaster Andrew Zolyak.

Starting at 4 p.m. on Friday, and lasting until 4 p.m. on Saturday in Harkness Chapel, the event featured many talents such as the a cappella groups Case In Point and the Case Men’s Glee Club, jazz combos, a variety of improvised skits, and many individual artists and performers who came to showcase their talents.

“My favorite thing was seeing all the great performances,” said Zolyak, “The thing I liked the least was being awake for so long.”

In accordance with Zolyak’s statement, despite the evening’s success with attendance, the turnout started to drop with the coming of late hours. As anyone that has ever pulled an all-nighter can attest to, it’s hard staying up with the comforting presence of sleep trying to drag us away. Stephen Frollo, the treasurer of M.U.S.I.C., says that “the thing that can be most readily improved for next year would be the announcement of the acts so more people will attend.” That way, there would be a better attendance at the later hours, despite the graveyard shift times.

In order to fill in these difficult time slots, performers did whatever they were able to without any sort of preparation in order to keep the performance going. A series of Whose Line Is It Anyway?-esque improvisational games commenced around 2 a.m. and went on until 3:30 a.m. Frollo performed an off-the-cuff string piano piece, which involved him plucking the strings of a grand piano and letting his buzzing cell phone vibrate the strings to create a unique sound. Graduate student Matthew Wascher arrived in the early hours of the morning to sing Gregorian chant with Zolyak.

In the earliest hours of Saturday, the group originally planned to host a screening of The Blues Brothers, in an effort to kill two hours of time with minimal effort, but this was eventually bypassed in lieu of lucid, late-night jam sessions. By 8 a.m., more normal, planned performances were back in swing, with a piano-vocal performance by Frank Blackman serving as an early morning highlight.

As having a larger variety of groups perform at the event is new, the group hopes “to see more students and faculty members at next year’s extravaganza,” says Frances Hogan, vice president of M.U.S.I.C. She also comments that “it’s important for all performers and performing groups on campus to unify and better the artistic culture of our Case Western community. Sometimes the best way to do that is to get on stage and have some fun.”

Zolyak agreed, saying, “I’m sure that there are a lot of people at Case who have quite a bit of talent, but who don’t have a good opportunity to perform. I think that the Palooza can be that opportunity.”