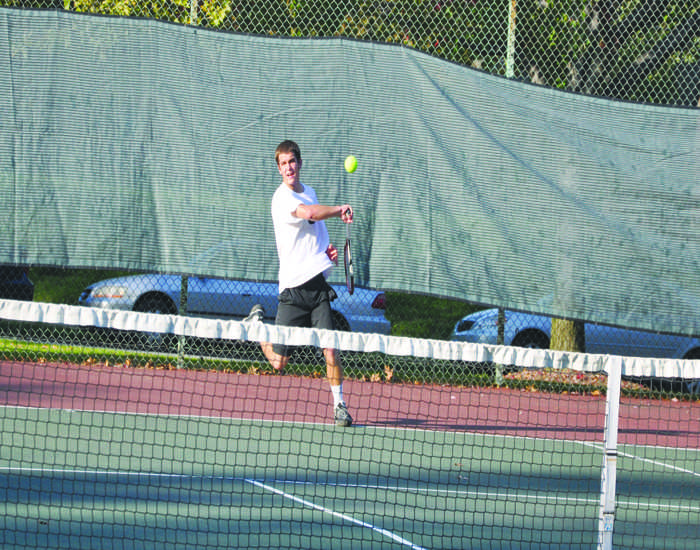 It has been a good week for Case Western Reserve University men’s tennis player John Healey. Not only did Healey go 2-0 in singles action and 2-1 in doubles action this weekend, he was also named the University Athletic Association’s Men’s Tennis Player of the Week.

On March 2, the Spartan men’s tennis team traveled to Oberlin College to play both the host and Hope College. The next day they faced Cleveland State University Division I Vikings.

The Spartans (7-5, 0-0) came up with strong victories against both Hope (1-1) and Oberlin (4-6), only giving up three points in each matchup. The Vikings, who won 6-1, halted the Spartans’ five-win streak the next day.

Despite the loss to Cleveland State, coach Todd Wojtkowski, in his fourth year with the Spartans, is happy with the play he has seen so far. His team is ranked 17th in the nation, which keeps the Spartans on the radar and gives them a chance to improve as they continue to be challenged in the very competitive UAA.

“Our goal is to make the NCAA tournament this year, and there are a few teams that we must go through in order to get there,” said Wojkowski. “Being ranked No. 17 in the nation is great; however, you truly need to be in the final three of the UAA to ensure that you make the tournament.” The Spartans finished at No. 19 in the country last year and fifth in the UAA. Without losing any seniors, the Spartans seem in good position to jump two spots within the conference.

The UAA has eight men’s tennis teams, of which Case and four others are nationally ranked: No. 2 Emory University, No. 10 Washington University, No. 16 Carnegie Mellon University, and No. 22 University of Chicago, as well as Brandeis University, who is on the cusp of being in the top 30 in the nation. With a strong showing at the UAA Championships in late April, the Spartans could be sitting pretty in the eyes of the NCAA committee.

To reach the lofty goal of an NCAA appearance, the Spartans will have to continue playing stellar tennis and follow Healey’s lead. Healey, playing at the six spot, was the only player to get a point in the Spartans’ matchup with Cleveland State; he defeated Jay Jones 6-1, 6-0. Healey has also teamed up with junior Kyle Gerber to create one of the most formidable doubles pairs in the region.

Gerber and Healey have already defeated two top-seven teams in the nation this season. Over the weekend, they handily defeated their Hope and Oberlin opponents 8-3 and 8-1, respectively. Against the Vikings, Gerber and Healey put up a tough fight, eventually succumbing 5-8. By accelerating into the end-of-season matchups with nationally ranked opponents, both Spartans are improving at the right time.

“We have made a major point to start playing our best tennis at the right time,” said Wojkowski. “This is why we schedule so many tough matches and some non-Division III teams. We believe that through struggles in the middle of the season we will be at our strongest by the time April rolls around.”

Also helping to lead the Spartans is freshman Will Drougas, from Roanoke, Va. Drougas has been playing his way into national attention, stepping into the number one singles position for the Spartans and being recognized as a top-10 player in the region.

Providing leadership to the team are seniors Rohan Patel and Sean Carr, both of whom are captains. Both have contributed in singles and doubles action, with Patel blanking his Hope College opponent and Carr putting on a strong performance against Oberlin’s number one singles player.

The Spartans get a break over the weekend to prepare for their trip to Virginia, where they have consecutive matches against West Virginia Wesleyan, Mary Washington, Washington and Lee, and Bridgewater. The Spartans’ next home match is against Denison University at 6 p.m. on Saturday, March 24.