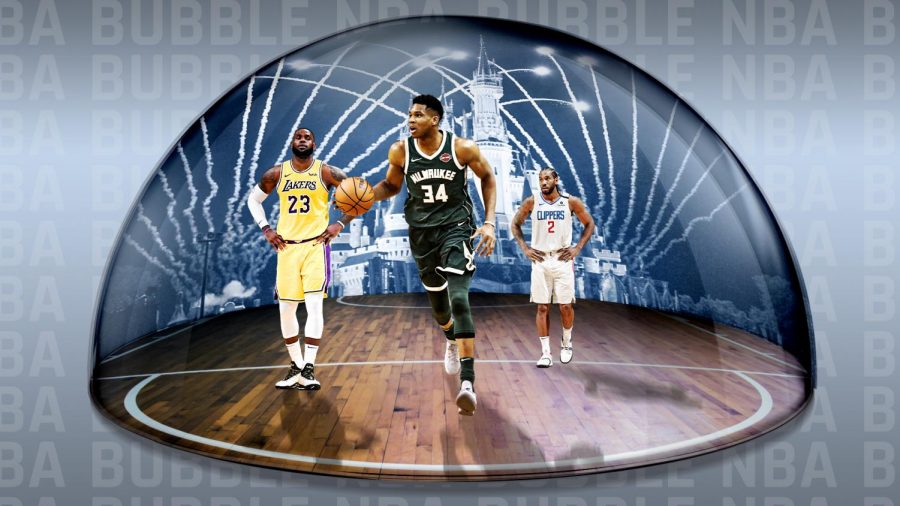 Giannis Antetokounmpo (center), LeBron James (left) and Kawhi Leonard (right) were three of the high-profile players that were able finish out their season in Orlando, Florida.

The COVID-19 pandemic that began in January and resulted in a period of quarantine and social distancing brought most aspects of society to a screeching halt, including major league sports. Several leagues spent months stuck in limbo, without any idea of whether they could restart their seasons.

When the major sports leagues did return to action, their COVID-19 policies resulted in a range of different outcomes. Within the first week, several NFL and MLB players tested positive for the virus. Multiple teams in these leagues also experienced viral breakouts over the weeks that followed. On the other hand, the NBA, the WNBA and the NHL began their seasons almost flawlessly, albeit under drastically adjusted environments.

So, what distinguished the virus-infected failures from the successful restarts? The answer lies in the “bubble” strategy.

The NBA bubble at the Walt Disney World Resort in Orlando is the best example to focus on. Their approach was fundamentally based on strict safety protocols and abiding by health experts’ recommendations. From the moment players arrived in Orlando, they were placed under quarantine for two days and tested for COVID-19. From then on, players, coaches, training staff and others within the bubble were tested daily. Other NBA staff, reporters and hotel workers went through different testing protocols and worked under rigid guidelines.

Dr. John Swartzberg, an infectious disease expert from the University of California, Berkeley, said in an interview for Popular Mechanics that the NBA had “two of the most powerful public health tools” that contributed to the successful restart. “One, they test[ed] everybody every day, and so if someone [got] infected, they [could] immediately remove them,” said Swartzberg. “And second, [they socially distanced]. [They were] in the bubble and their contact with other people [was] strictly enforced.

These extensive measures came at no short cost. The NBA spent approximately $180 million for daily COVID-19 tests, facilities, treatments, procedures, quarantine regulations, meals, security, transportation and sanitation. However, with the pandemic, the NBA was poised to lose more than $1 billion in revenue; so the Orlando restart salvaged this financially devastating year. Furthermore, the impeccable execution under pandemic guidelines put the league’s product in a global spotlight and enhanced its reputation as a responsible, cohesive sports league.

The staunch efforts of the NBA prevented the numerous outbreaks that the MLB and the NFL experienced. Unlike the NBA, the other two leagues continued to allow teams to travel and did not implement consistent testing. In addition, the lack of control over the players’ and personnel’s whereabouts puts (or put, in the case of the MLB) these teams at greater risk for infection. The Miami Marlins of the MLB, for example, had an outbreak when players went out at night, ignoring the team’s safety protocols.

It is imperative for sports leagues to prioritize their players’ health and safety during this pandemic because the long-term effects of COVID-19 are currently unknown. Much of the media has focused on both the low death rate and those patients who recover fully without lasting problems. However, certain cases have called into question the more detrimental, less visible effects of getting infected. Parveen Garg, an associate professor of clinical medicine at the University of Southern California, emphasized that although athletes aren’t necessarily concerned with dying after contracting the virus, they are “also grappling with this possibility that the virus could induce permanent damage in [their lungs or hearts]. That would hurt [their] ability to be a professional athlete” in an interview for Sports Illustrated.

Unfortunately, for some sports leagues, it simply isn’t feasible to find a “bubble” to continue their seasons. “There’s no place that has five major league fields within a half-hour drive,” said MLB’s medical director Gary Green, also for Sports Illustrated. “That’s an ideal world, and it’d be great if we had a bubble and we had multiple fields where we could play and do that. But we have to operate in the real world.”

On Nov. 5, the National Basketball Players Association voted to commence the 2020-2021 NBA season on Dec. 22. The season is planned to be shortened to 72 games, compared to the usual 82 games. Although these decisions have been made, the league is yet to decide where the games will be played and how the health and safety of the players will be maintained. Given the success of the NBA bubble, it is possible the league will continue with a modified bubble that will work for all the teams. However, that remains to be seen.

The NBA draft is scheduled for Nov. 18. It’s clear that the NBA will pursue all possible methods to bring basketball back. It seems to be the most prepared and capable league to do so.