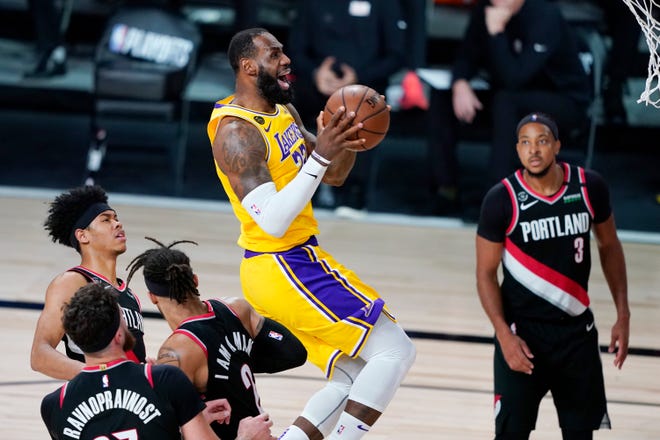 Courtesy of the Associated Press

The NBA playoffs have restarted again after a three-day boycott sparked by the shooting of Jacob Blake in Kenosha, Wisconsin on Aug. 23. The Milwaukee Bucks did not take the court in their Wednesday game against the Orlando Magic, which led to the NBA playoffs being postponed and several other sports leagues having games cancelled in a show of solidarity. The playoffs restarted on Saturday with five first-round series continuing and one second-round series beginning.

Bucks vs Magic: The top-seeded Bucks closed out their series with the eighth-seeded Orlando Magic 4-1 with a strong 118-114 win in game five of the series. Bucks’ stars Giannis Antetokounmpo and Khris Middleton both had doubles, with Antetokounmpo scoring 28 points with 17 rebounds and Middleton scoring 21 with 10 rebounds. The Magic had five players scoring in double figures with center Nikola Vucevic scoring 22 points and grabbing 15 rebounds. Despite giving up the first game in an upset, the Bucks strung together four strong performances in a row to dispatch the Magic from the NBA bubble. The Bucks will now face the Miami Heat for a spot in the conference finals.

Rockets vs Thunder: The Houston Rockets and Oklahoma City Thunder went at it in a crucial game five with their series tied at 2-2. Steven Adams, Chris Paul and Dennis Schröder were bright spots for Thunder, all scoring in double digits. Adams pulled down 14 rebounds and Schröder had 19 points. At one point, Schröder and the Rockets’ P.J. Tucker got into a scuffle, leading to both of their ejections. For the Rockets, James Harden scored 31 points with five assists and Robert Covington scored 22 with seven rebounds to help push past the Thunder with a final score of 114-80. The Rockets look to close out the Thunder with a 3-2 lead in the series.

Lakers vs Blazers: The Los Angeles Lakers and the Portland Trail Blazers played a tight game five, with the Lakers going in with a 3-1 lead. Portland was missing their superstar Damian Lillard, who had left the NBA isolation bubble to deal with injuries. C.J. McCollum had 36 points along with seven assists, and Carmelo Anthony stepped up with 27 points and seven rebounds for the Blazers. The efforts weren’t enough to stop the Lakers’ Anthony Davis, who scored 43 points and had nine rebounds, as well as Lebron James who had a 36-10-10 triple double. Like the Bucks, the No. 1-seeded Lakers also gave up game one, but had several strong performances to move on in their run for a championship. The Lakers will now play the winner of the Rockets and Thunder series for a spot in the Western Conference Finals.

Clippers vs Mavericks: The Clippers came into this game five with a 3-2 lead on the Dallas Mavericks. The Mavericks were playing without Kristaps Porzingis again, and Luka Doncic had to carry the weight as he scored 38 points with nine rebounds and nine assists. Kawhi Leonard scored 33 points and had 14 rebounds along with seven assists for the Clippers. Paul George also contributed with 15 points, nine rebounds and seven assists. Despite Doncic’s efforts, the Clippers persevered and won the game 111-97 to advance to the next round of the playoffs. The Clippers would either play the Nuggets or Jazz.

Celtics vs Raptors: The Celtics and Raptors matched up for the first series of the second round. The Celtics came out hot and never looked back as they won 112-94. All five starters for the Celtics scored in double digits with Jayson Tatum and Marcus Smart both scoring 21. No Raptors player scored above 20 as the Celtics cruised to a 1-0 lead in this conference semifinal series.