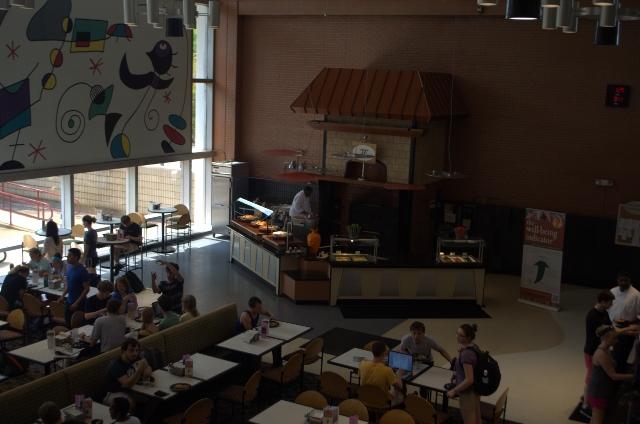 We’ve all had guilty thoughts about the food our campus is wasting, the Einstein bagels we throw away and the containers of Grab It food no one will eat. However, a new student organization on campus is on a mission to make use of that leftover food.

The University of Maryland started the Food Recovery Network. It is a national program they started when they recognized they wasted hundreds of pounds of food every day from their cafeterias while people were starving a couple streets away. Case Western Reserve University students Sara Ahmed, Shadi Ahmadmehrabi and Faraaz Hussain have founded a Food Recovery Network here on campus after recognizing the same issue within the CWRU community.

“We wanted to make the connection between what’s on campus and what’s five minutes away,” Ahmadmehrabi said.

Their mission, they decided, was to reduce waste on campus while also eradicating hunger. To do that, they needed to organize how and where to collect the food, as well as how to contact potential non-profit organizations in need of food donations.

They spent a year reaching out to non-profit organizations in the community and catering locations on campus, building resources and connections. Obstacles like where to store the food and the costs of transportation were challenging to tackle.

The program, which is run under the Muslim Student Association, transported food to the West Side Catholic Center for their first few Saturdays.

Then, after officially partnering up with another student organization on campus, Kids Against Hunger, they added St. Matthews Methodist Church to their list of nonprofits.

In partnership with Kids Against Hunger, whose mission is to feed starving children in the community and around the world, Food Recovery Network held their most successful event this past weekend. They were able to collect and donate 130 pounds of food to St. Matthews.

“It seems so miniscule, what we’ve done relative to the impact we’re having,” Ahmadmehrabi said.

“Hunger is the same,” Ahmed said. “Just that one meal can help them with the other stresses in their lives.”

Both Ahmed and Ahmadmehrabi agreed that they couldn’t have done it without the enthusiasm and willingness of the employees of Bon Appetít, St. Matthews United Methodist Church and West Side Catholic Center. They have been collecting food from Bon Appetít’s catering locations like L3 on North Side, Cramelot, Einstein’s and Tomlinson. They also wanted to credit their advisor, Mika Weinstein, the members of Kids Against Hunger and Slow Food (another organization on campus that raises awareness about food consumption) for their energy and hard work.

“Those people in those organizations are so passionate, and they know so much,” Ahmed said. “We want to join with other organizations on campus to make this strong. We want to get everyone involved who’s passionate about it.”

Their next collaboration is with Slow Food on the organization’s event called Disco Soup. The mission of the event is to take all leftover food and create a soup kitchen, distributing the soup to the hungry, collecting donations for non-profit organizations and raising awareness.

“It’s such a blessing to get to do this,” Ahmadmehrabi said.

Anyone interested in getting involved with the Food Recovery Network can contact them via email at sxa436@case.edu.