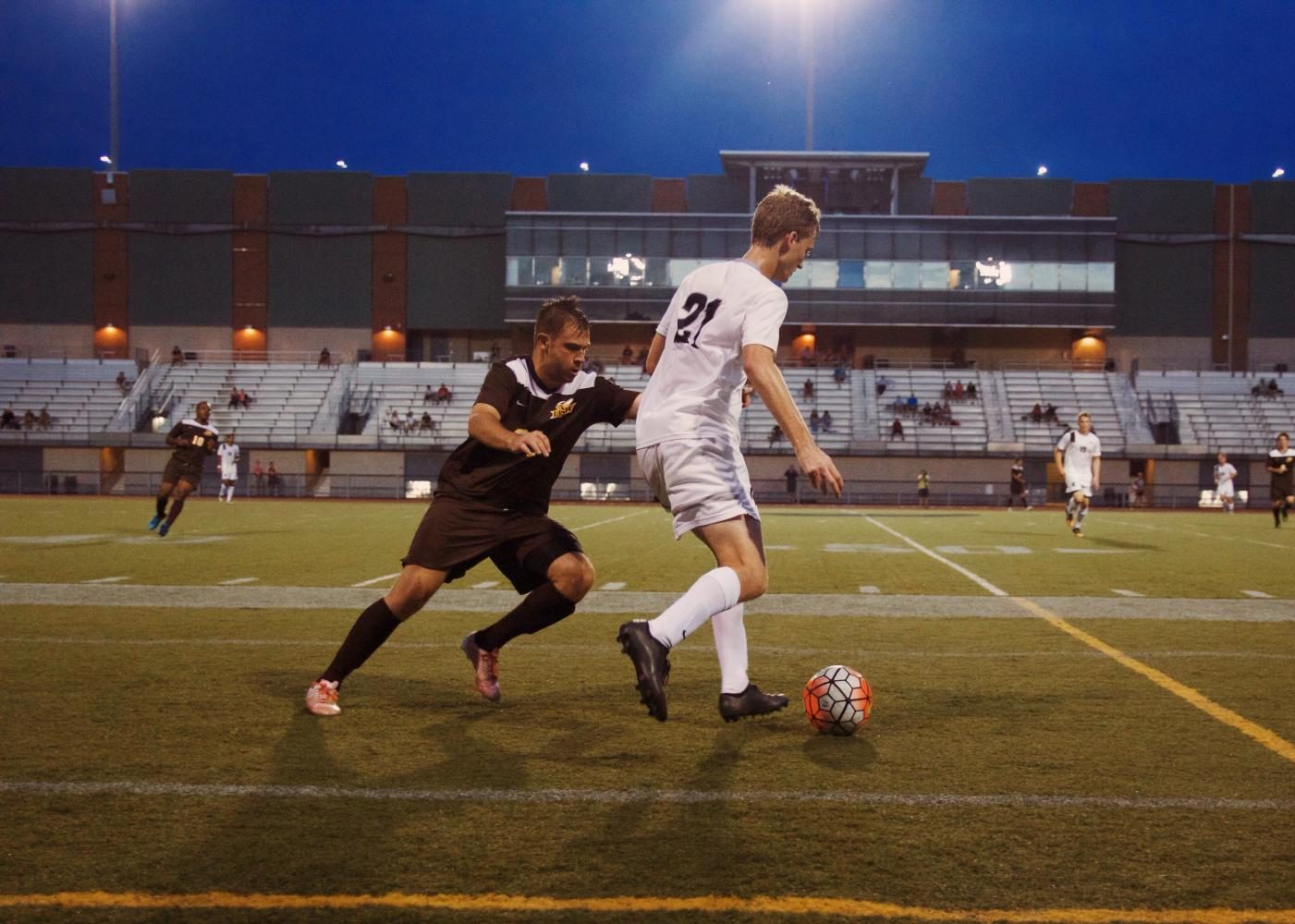 During a game last season, defenseman Christian Lytle lines up a pass.

The Case Western Reserve University Men’s Soccer Team is already gearing up for an exciting new year, with new faces and new challenges alike. Last year, the team ended on a two-game losing streak with a final record of 5-9-4. This year, the prospects may look brighter, though the schedule looks tougher.

Head Coach Brandon Bianco, after only four days into the preseason, said that he believes this year’s squad “has all of the tools to compete in every game.”

Fourth-year forward Michael Balog says that he is “very excited” for this year, adding that he believes this team has “a lot more depth” and “a lot of talented underclassmen,” two factors that will help the team succeed in the long term.

As far as this year’s schedule goes, it is opening the same way it did last year — at home against the University of Mount Union Purple Raiders. The Spartans opened last year with a 3-0 victory over the Purple Raiders, and the team is hoping for more of the same this year.

Bianco stressed that the important piece to winning this initial game is to focus on their own team, because nobody knows exactly what the Purple Raiders will look like just yet. Balog said the rest may depend upon fourth-year goalkeeper Calvin Boyle, a First Team All-University Athletic Association selection, delivering to the highest of his own capabilities.

After the game against Mount Union, Balog believes it is fair to say that the Spartans “probably have the hardest schedule in the nation.” However, instead of saying this as a bad thing, Balog thought of this as a “good opportunity to make the NCAA tournament”, if the team does well.

Balog’s opinion seems true, with the team regularly slipping towards the end of games and a mediocre 1.11 goals per game average last year. The team’s 9.7 percent shot conversion rate last year also backs up Balog’s statement, and that percentage may be the key to turning things around in this coming season.

Looking toward ways to improve the team this year, Bianco says one of the keys to success will be integrating the new faces of the team, and then focusing on “getting more numbers in the attack and delivering penetrating passes” so as to “break down the other team’s defensive line.” From the individual player’s perspective, Balog claims that this year it will be about utilizing each player’s talents and delivering on a more dynamic offensive style.

The new members of the team, specifically the first-year students, seem to be a crucial group that could make or break this season. Bianco said that their success “will depend on how they transition to the rigor of CWRU.”

The first-year students should be excited, though, because their coach also noted that if they succeed at that transition, it is possible that they will get to be on the field during important moments.

Balog sees potential in his new teammates. Throughout the pre-season, he said that the first-year students “have been very impressive and unafraid of the transition to the college game.” And as for the now second-year students on the team, Balog feels that their improvements from last year will shine as the season gets underway this year.

There are eighteen games on the schedule, thirty players on the team, and an immeasurable level of potential for the Spartans. The season will be long, and it will come with its own ups and downs. But the team knows what it needs to do, and now it is just left to execution. The journey begins on Friday, Sept. 1, at 7:30 p.m. on DiSanto Field against Mount Union.