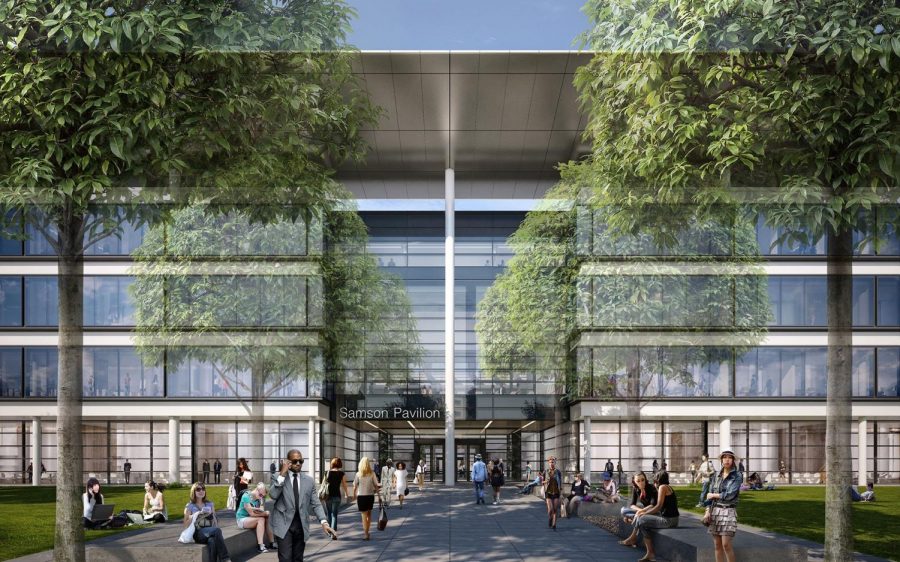 In summer 2019, Case Western Reserve University in collaboration with the Cleveland Clinic will be opening the Health Education Campus. Located on 93rd Street between Euclid and Chester Avenues, it will feature 11 acres of land and two new buildings.

The 485,000 square-foot Sheila and Eric Samson Pavilion was designed by Foster + Partners architects and is immediately identifiable by the 27,000 square-foot central atrium, slightly smaller than the one in the Cleveland Museum of Art. Adjacent to the pavilion will be a separate three-story 126,000 square-feet dental clinic and next to the dental clinic will be a recreational park for families. When completed, the campus will be able to accommodate 2,200 students.

Although the Health Education Campus did not originally intend to have dentistry and nursing departments, the decision to include them expanded the original design by around 300,000 square feet. The reasoning behind this decision was to encourage collaboration between students of different disciplines, also known as “interprofessional education.” Now, the campus will educate medical, nursing and dental students, as well as those from the School of Applied Social Sciences.

“When it opens next year, the Health Education Campus will transform medical education for the next generation of caregivers,” said Dr. Tom Mihaljevic, CEO and president of Cleveland Clinic.

The university and the hospital have raised around $270 million of the $515 million needed and have plans for more fundraising in the future. The total budget includes all project costs, such as the dental clinic and a new parking garage.

“When we go in to approach a donor together, it is a powerful statement about the priority of this project,” said Snyder.

Eric Samson, a steel company executive whom one of the buildings is partially named after, is one of the largest donors. Originally from South Africa, Samson built a strong relationship with the Cleveland Clinic when he flew to Cleveland in 2000 for triple bypass surgery which was performed by Cosgrove.

The interiors of the buildings will contain top of the line equipment to keep up to date with the latest technological advancements. Among other things, the main building will have high-tech simulation labs and an innovation laboratory for developing and testing new technologies. Students will also be using HoloLens, an augmented reality device developed by Microsoft, for subjects such as anatomy.

“The ability to see individual organs and systems in three dimensions and then virtually explore all of their attributes when healthy or damaged,” said Snyder, “will give our students insights simply not possible with traditional cadaver-based approaches.”

The design was made with collaboration in mind: it includes classrooms planned around group work, shared lounges and study areas, all of which ensure that students are frequently interacting with each other both inside and outside of the classroom.

Alongside traditional health courses, new courses will be offered that focus on building teams with a combination of different skills and learning how to utilize each person’s specialty to provide the best patient experience. On this new campus, students will not only witness medical teams practice but also be able to build their own partnerships.