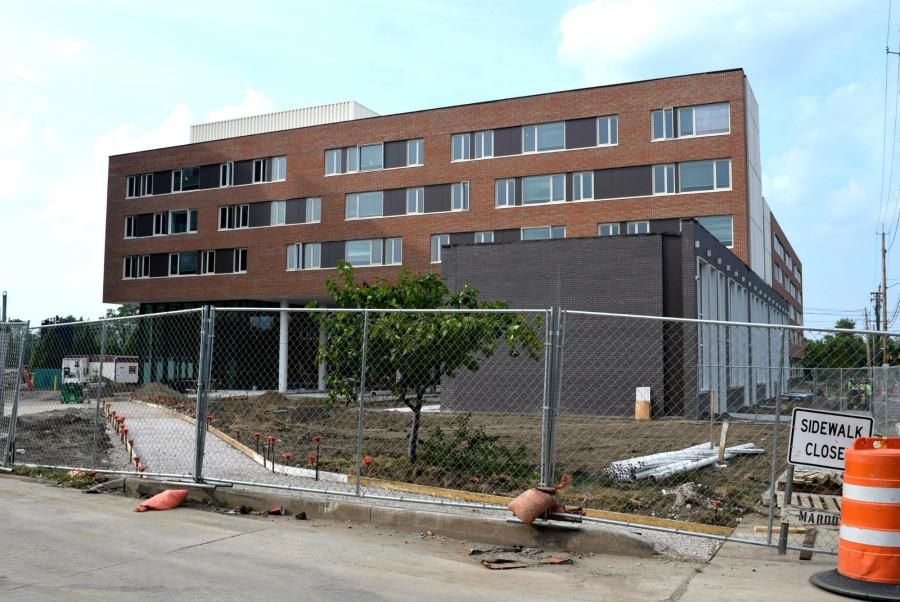 Students who have spent the beginning of the school year in hotels or other temporary accomodations will be able to move into their rooms in the new residence hall on September 12.

Case Western Reserve University’s new residential hall is finally opening for move-in this weekend. Originally intended to open at the beginning of the school year, the building was put on hold last winter due to record low temperatures, pushing its move-in date back by almost a month.

“What they had told us initially about a target date is actually coming true,” said Loretta Sexton, associate director of Residence Life and Services. “Students are moving in on Sept. 12. We’re very excited about that.”

While it still lacks a name, the Office of Residence Life and Services is calling the new building “the 1576,” in reference to its address on E. 115 St.

“We would love for it to have a name, but we’re not exactly sure when or where or how that would be decided,” said Sexton. “It’s hard to call something the ‘new residential hall’ because at some point it isn’t new anymore.”

On Thursday, students who chose to store their belongings with Armbruster Moving & Storage, Inc. had their boxes delivered directly into their rooms. This Friday students staying at the four hotels have the option of moving certain items into designated central areas, leaving the transportation of these items to the moving company. These students can then move in the next day, Saturday, with the help of shuttles traveling to and from the hotels from 9 a.m. to 3 p.m.

Students had the option of living in their Greek houses if space was available, the Courtyard by Marriott-Cleveland University Circle, the DoubleTree Tudor Arms Hotel by Hilton, and Intercontinental Conference Center & Intercontinental Suites Hotel, Wade Manor or in off-campus housing of their own choosing. Around 70 chose to find their own housing and received a further discount on room and board for the semester, and those in hotels were randomly assigned.

“It’s inconvenient to be living this far away from the heart of campus,” says junior Mara Grigg, one of nearly 200 students currently living in a hotel. “But the hotel staff [at the Doubletree] has been wonderfully accommodating to all of us.”

Sexton reports that there were no complaints from students about getting to class in a timely fashion; most of the issues came from returning back to the hotels. The Office of Residence Life and Services opted to not include the hotel shuttles in the predictions on NextBus, largely due to the inability to predict how long the trip back to campus would take, given Cleveland traffic and construction.

“Living off-campus was all right,” remarked Shah. “I felt much more in control of my situation. I didn’t have to send my laundry or things off to a third-party service.”

Housing used focus groups to determine what new amenities the 1576 could contain. Much like the Village at 115th and Triangle Apartments, the new residential hall still has apartment-style housing, with a full kitchen and bathroom. The sink has been moved to outside of the bathroom, much like in hotel bathrooms, and the showerheads have been moved up significantly, two of the biggest requests from the focus groups.

Unlike the Village, where every suite is different, each suite in the 1576 has the same floor plan. There are also parts of the building that are only meant for residents: study rooms, which are dubbed “academic nodes,” and residential lounges. These cannot be reserved by outside parties, and must be accessed by residents of that building. The 1576 will also contain common spaces on the first floor that are for the residential community, such as a multipurpose room and an active learning classroom.

While there are no grand opening plans for this weekend, Sexton stated that there will be an official opening later this semester. Students will have the chance to see the finished outside landscaping, installed benches and common areas available to all of the CWRU community. The building is expected to be Leadership in Energy and Environmental Design (LEED) Silver certified and contains environmentally friendly aspects such as rain gardens and a green roof.

According to Allison Heuring, assistant vice president for Campus Services, the costs of this delay will also not be known for a few weeks, as Housing is still incurring costs for hotels, the laundry service, shuttles, moving and storage and meal plans.