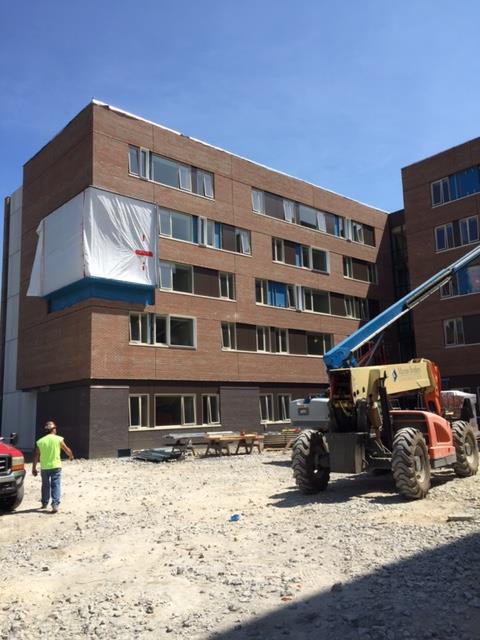 The Office of Housing and Residence Life released updated photos of the construction on June 29.

Construction on the new residence hall for upperclassmen is currently continuing along the updated schedule, with expected completion by August 31 and student move-in on September 12. Although there is a chance that it will be completed earlier than that, the plan is still for students to spend the first part of the semester living in off-campus hotels.

“Earlier occupancy of the New Residence Hall by students may yet be possible, but is dependent on City of Cleveland inspections and receipt of a Certificate of Occupancy,” said Steve Campbell, Vice President of Campus Planning and Facilities Management. “As we get closer to the end date we’ll have an increasingly clearer picture of how we might facilitate earlier occupancy of the building.”

According to Campbell, the construction company, Marous Construction, is currently working on an extended schedule with “selective overtime” in hopes of earlier completion of aspects like IT, AV, signage, lockets and equipment including laundry machines. They plan to begin moving furniture into the building in early August.

In the meantime, displaced students will be housed in the Courtyard by Marriott, the Tudor Arms, the InterContinental Hotel-Conference Center on Carnegie Avenue and the InterContinental Suites on Euclid Avenue. According to the Office of Housing and Residence Life, the students will receive a discount of $1,250 on their housing, and will have access to shuttles to take them to the main campus. They will also be given meal plans and temporary storage.