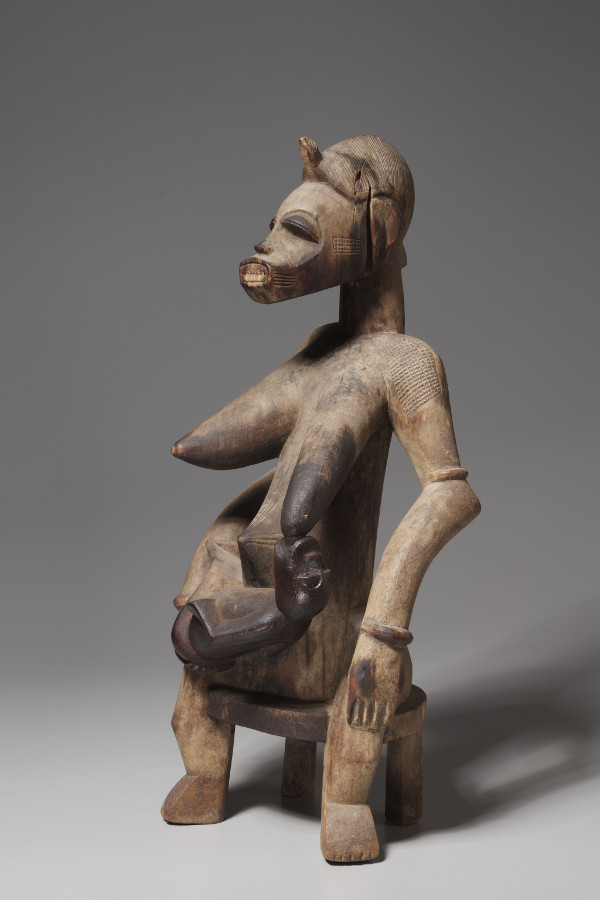 Sculptures such as this one, which depicts a mother breastfeeding a child, will be included in CMA's newest exhibit.

The Cleveland Museum of Art (CMA) has recently unveiled its newest exhibition, “Senufo: Art and Identity in West Africa.” The much-anticipated display features artworks from the countries of Côte d’Ivoire, Mali and Burkina Faso.

The display, which is held in the Kelvin and Eleanor Smith Foundation Exhibition Hall, has resulted in a complete transformation of the room. The exhibition hall is deconstructed with each new exhibition—the walls literally come down and are built back from the ground up.

The hall’s new look is fitting for the African exhibition. The bold, dark and mysterious colors from the previous showcase have been replaced with rich, earthy colors. The layout is now much more straightforward and open, conveying a simple but powerful tour through this unique branch of African culture.

The Senufo label is one that has been met with controversy and confusion, according to Susan Elizabeth Gagliardi, an assistant professor of art history at Emory University.

“The Senufo label informs and is shaped by the experiences of people who identify or are identified as Senufo,” explained Gagliardi. “However, the term ‘Senufo’ does not on its own suffice to define or explain people or arts.”

Nevertheless, for the sake of clarity and convenience, the artistic world has long used the Senufo label to categorize the distinctive geometric, exaggerated artwork by the Gur-speaking people of the aforementioned countries.

Senufo artwork is characterized by an almost cubic quality. In fact, Pablo Picasso—along with several other 20th century artists—is said to have derived much of his inspiration from Senufo works.

The CMA exhibition, which features over 150 works from private and public collections throughout the world, includes works that exemplify some of the best qualities from the region.

Some of the stunners include a mother and child figure, depicting a woman with an anteater-like face, tubular breasts and a sharply pointed stomach breastfeeding an infant.

Several of the other human figures also seem to possess animal-like features, ranging from crocodilian to avian. Their bodies are strangely distorted and marred, but the beauty is still very much there, in the delicate features and painstaking carving.

The show’s real shocker, however, is a massive helmet-mask adorned with dozens of animal horns and a sneering crocodile’s mouth. To the untrained eye, the piece appears to be an outtake from Frankenstein’s lab, but CMA Curator of African Art Constantine Petridis knows the real story.

“Nothing is chosen randomly,” Petridis explained. “There is a very specific meaning associated with these kinds of additions, and it also points to the accumulation of power over time. It’s more than just a sculpture. It’s an object that grows over time and accumulates inherent energy and power that can be used for a purpose that reaches beyond.”

Farther back, at the end of the exhibition hall, are several metal horned helmets, weathered with rust and wear. The helmets look like they’d be more at home in the frigid seas of Scandinavia rather than the arid African lands. Interestingly, Viking helmets were not actually horned. Perhaps these West African warriors were the real menaces.

Like with the terrifying helmet-mask, the horns symbolize power, and power is indeed shown in some of the more elaborate, headache-inducing headgear.

“Many of these objects transcend cultural boundaries, cultural frames and have much more to do with personal agency and personal ambitions,” said Petridis.

Despite any initial impressions, it seems most can find something with which to relate at this vastly varied exhibition.